In the city of roosters
Travel

In the city of roosters

Lampang's historic wealth can be seen in its wonderful architecture

For motorists heading to Chiang Mai or Chiang Rai, Lampang may be just a pit stop. However, if you linger a bit longer, you will notice that the town has a lot to offer. 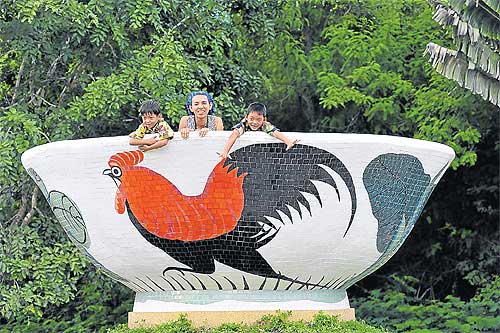 The symbol of Lampang is the white cock, and it is noticeable all around town. Legend says that Lord Indra was afraid that people may not get up early enough to prepare food for Lord Buddha, when he travelled to Lampang. Hence, Indra disguised himself as a rooster to act as a morning alarm.

"Lampang people are wealthy," a friend once told me. "In other northern cities, you may notice the beautiful roads. In Lampang you notice the wealth."

I did not understand what she meant till I spent a few days exploring Lampang.

Though the town is not beautiful, but rather chaotic with businesses lining narrow roads, there are many houses, particularly those built a century ago, that mirror the town's prosperity.

From teak houses built in traditional Lanna style, with gingerbread carvings (elaborate woodwork that decorates the trim of a house), to elegant concrete buildings with stucco works, there are remarkable properties that are scattered around town.

Elegant houses in Lampang tell of the town's glory days when the logging business was in full boom in northern Thailand, a bit over a century ago. 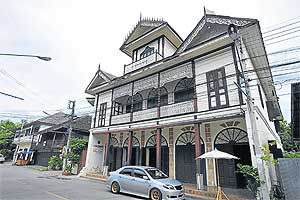 Maung Ngae Zin’s house is a landmark on Thanon Talat Kao. Left unattended for years, the house has been refurbished to showcase some of the best craftsmanship in town. Maung Ngae Zin is the son of Suay At, the first Myanmar headman of a logging company in Lampang, an ancestor of the Suwanna-at family who made their fortunes from trading wood. The house was first turned into a grocery shop, then a bar and guesthouse for tourists, and finally into a coffee house. Only a part of the house is in use.

In those days, Lampang was a significant log centre of the North. Teak logs were stockpiled in the Wang River and transported downstream along the Chao Phraya River to Bangkok.

Logging companies from the West, who had obtained concessions from the Siamese government, brought in labour from Myanmar.

After making a fortune in the logging business, the people from Myanmar built houses and Buddhist temples, bringing their art to Lampang. That is why a number of temples in Lampang are constructed in the Myanmar style. Chinese merchants were also not far behind. The Chinese district and market were set up by the Wang River. Beautiful shop houses on Thanon Talat Kao or the Old Market Road is evidence of this past glory.

As the northern railway was developed from Bangkok and extended to Chiang Mai, Lampang and the Wang River lost their roles as major transportation routes.

With the advent of the road system, which allows motorists to travel faster today, Lampang became a pit stop for travellers to the North.

Lampang is not extremely busy like most popular destinations; nor is it entirely quiet or boring. Every corner tells a story.

Stroll along the back roads or drive around, and you may discover its unique charm. The Kanchanawong Building originally belonged to Bua Phad Kanchanawong, a merchant from Myanmar. It is now owned by a Lampang local. The gingerbread (elaborate woodwork that decorates a house) carved building was first built by workers from Mandalay, in Myanmar, to be a tailor shop on the ground floor with a living space on the upper floor. 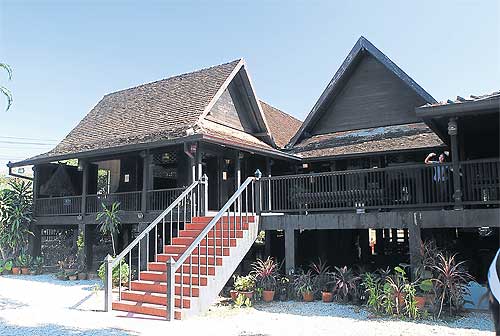 Ban Sao Nak, meaning the house with many stilts, is another example of the prosperity in Lampang. Built in 1895 by Moung Chan Ong, the Myanmar ancestor of the Chandraviroj family, the teak house has 116 stilts. This property has been honoured for its outstanding architecture, which is a mix of Lanna and Myanmar styles. 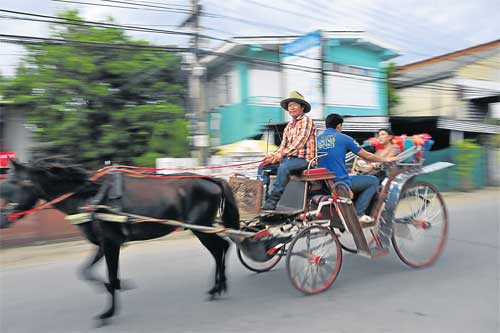 The horse carriage is a symbol of Lampang. It was introduced from Bangkok around a century ago. In 1916 when the railway reached Lampang, the governor brought in horse carriages. They later were used as taxis and soon became a tourist attraction. A ride around town starts at 200 baht, and takes around 30 minutes. If you want a longer ride, the fare is 300 baht an hour. 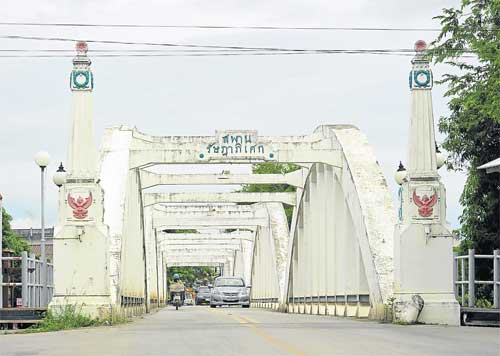 Stroll along the Wang River and you will come across the Rassadapisek Bridge. On the top of the bridge’s pillars is a bas-relief garland marking the death of King Chulalongkorn, who ordered the construction of the bridge. 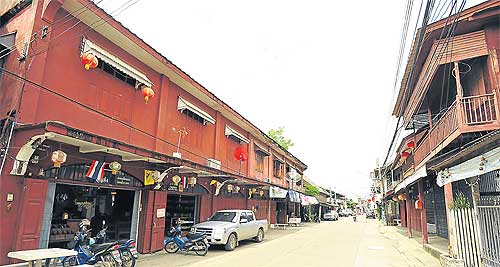 Thanon Talat Kao, or the Old Market Road, mirrors the past glory of Lampang. It is lined with beautiful houses of wealthy people and shops. Buildings around here once played an important role when Lampang was a transportation hub of the North. The province connected the North to Nakhon Sawan, which was the hub for the Central Plains. The slow current of the Wang River made it perfect for merchants’ boats and it was a good place to stockpile teak logs before sending them to Nakhon Sawan by river. Wat Pong Sanuk in downtown Lampang is an ancient Buddhist temple built in the 11th century. An important structure in this temple is the viharn (chapel)—the Pavilion of a Thousand Buddhas—which blends art from Lanna, Myanmar and China. The local people believe that carpenters from Chiang Saen, in Chiang Rai, built the pavilion by copying a royal tower in Xishuangbanna, Yunnan, China. 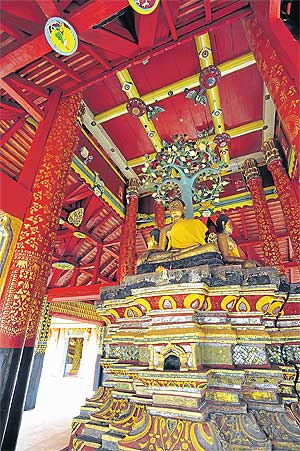 In the centre of the pavilion there are four seated Buddha statues under a bodhi tree facing four different directions. The statues represent the four Buddhas who have attained enlightened. 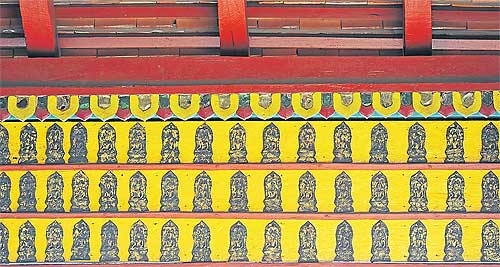 Close to the roof, there are more than 1,000 small Buddha images placed around the pavilion. This why the viharn (chapel) is called the Pavilion of a Thousand Buddhas. The pavilion represents Mount Sumeru, the central world-mountain in Buddhist cosmology. Four small wooden towers on all gables represent four continents, according to Buddhist cosmology. 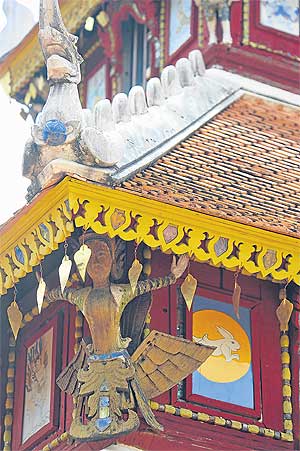 The roof is decorated with mythical half-bird, half-human creatures in the attire of the Myanmar royal court, and peacocks which were a symbol of the Lanna king. The windows are decorated with carvings depicting horses, cows and the heavenly lion. There are also pictures of Jataka tales. 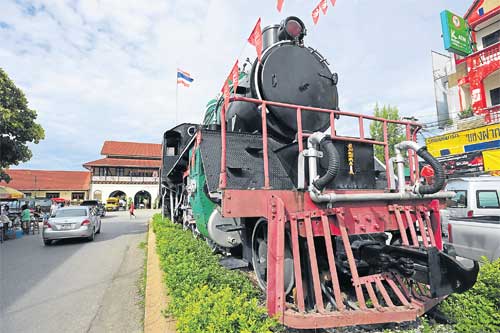 Lampang Railway Station is considered one of the most beautiful in Thailand. A blend of European and Lanna architecture, the station is famed for its arches and carvings. It has been honoured by the Association of Siamese Architects under Royal Patronage for its outstanding conservation.

If your train has been delayed and your mobile phone is about to run out of power, this is the station to be stuck at. Lampang Railway Station provides electric sockets for passengers to charge their mobile phones, for free. 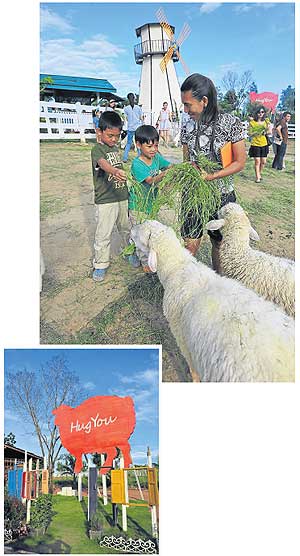 A small group of sheep in a farmstyle setting is the latest tourist attraction in Lampang. The Hug You Farm also sells sheep’s milk products like milk, ice cream and cake. If you are crazy about sheeprelated cosmetic products and souvenirs, Hug You Farm is the place to go. On sale are dolls, toys, fridge magnets, hand cream, skin lotion, lip balm, shower cream and even sheep placenta cream.

Around town, there are numerous ceramic outlets where housewives can easily spend their days. White clay makes Lampang a mecca for ceramic s in Thailand. The industry started in 1957 when a Chinese ceramic maker discovered that Lampang’s white clay was of excellent quality and relocated a factory from Bangkok to Lampang. The very first product was a Chinese style rice bowl with painted roosters. The bowl has become a signature of Lampang. There are now 150 ceramic factories across the province.