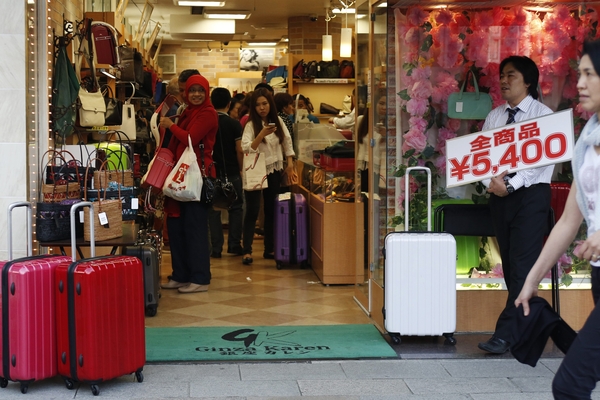 Tourists look at items inside a store as a man holds a banner reading, "All items 5,400 Japanese Yen", in Tokyo's Ginza shopping district. The estimated number of foreign traveller arrivals in Japan in 2014 jumped by around 3 million from the previous year to a record 13.41 million. (Reuters photo)

Arrivals to Japan jumped by around 3 million year-on-year to a record 13.41 million in 2014, boosted by the weak yen and relaxed visa requirements, the Japan National Tourism Organisation (JNTO) said on Tuesday.

The number of arrivals in 2014 surpassed the previous record of 10.36 million in 2013, lifted partly by the easing of visa requirements for visitors from more Southeast Asian countries.

''The main attractions were the visa exemption for Thai tourists effective from July 2013 and the launch of LCC (low-cost carrier) flights between Bangkok and Japan starting from June 2014,'' Kazuhiro Ito, executive director of JNTO Bangkok office, told the Bangkok Post.

More Thais also went to Japan during the school breaks in April and October, he added.

Japan set a modest tartget to lure up to 700,000 Thai visitors to the country in the future, Mr Ito added.

Thai visitors ranked first in Southeast Asia for Japan, followed by Malaysians with 249,500 visitors. Japan's popularity among Vietnamese also leapfrogged to 184,200 last year, a 70% jump from 2013.

The surge in travellers from China was a result of more shoppers taking advantage of Tokyo's expansion of duty-free products to include food and cosmetics, with large cruise ships making more than 100 port calls.

The rise in Asean tourists came after Japan exempted short-term tourist visa requirement for these countries, the JNTO said.

Japan exempted visa for tourists from Thailand and Malaysia in 2013 and for visitors from the Philippines, Indonesia and Vietnam last year.

Spending by foreign travellers soared 43.3% from 2013 to a record 2.03 trillion yen, (560 billion baht) with visitors from China accounting for some 25% of total spending, according to the Japan tourism agency.

Japan aims to increase its annual foreign arrivals to 20 million by the 2020 Tokyo Olympic Games. The Shinzo Abe government targeted expansion of the tourism industry under its growth strategy.