In the lull of Ocean Utopia
Travel

In the lull of Ocean Utopia

published : 2 May 2016 at 04:30
newspaper section: Life
writer: Max Constant
Two divers guide a sculpture and its concrete base towards the Koh Tao seabed. (Photos by Elizabeth Lauwerys)

It is both a work of art and a project to preserve and protect nature. But above all, "Ocean Utopia" is the dream come true of Valerie Goutard, known by her artist name Val, an energetic 40-something sculptor already well-known across Asia and beyond for her lanky, faceless and yet deeply seductive bronze characters strolling the world as if in a perpetual quest for meaning.

Val has had major exhibitions or permanent art installations in Bangkok, Shanghai, Taipei and Singapore. She has also created a new enigmatic bronze statue which will be soon placed in Benjasiri Park, contributing to the enjoyment and bewilderment of joggers.

But clearly, as the French woman guides us across her large workshop in the Nawamin area encumbered by half-finished pieces of art either in bronze, glass or stainless steel which vary in size from the huge to the tiny, "Ocean Utopia" is of another dimension.

"I love to put my sculptures in an outdoor setting, be they small-size, middle-size or monumental ones. I love interaction between nature and sculpture," she says.

Val wanted to push this experience by having some of her sculptures placed under water and be "the start of a new coral reef at a place where there was one which, unfortunately, had died".

Her agent (and husband) Frederic Morel, a long-time resident in Thailand, scoured the internet to look for environmental protection organisations which could be interested.

And after contacting ecological outfits across the world, it happened that the one which was the keenest and provided the most accurate outline was a NGO based in Koh Tao, the New Haven Reef Conservation Program.

"New Haven Reef Conservation Program, directed by Chad Scott, is in the care of preserving some submarine zones near Koh Tao's shores," said the artist. "The NGO is, among others, listing all the species in these zones and monitoring them. For them, having a work of art which helps new coral to grow is a way to attract attention on reef preservation, to convey an ecological message."

But wait a sec. A sculpture helping coral to grow?

Well, bits of broken coral, ripped away accidentally by divers or by natural incidents, need a starting point for a new career. They need to be fixed on some spot off the ground to be able to develop. And spots, which the large artworks of Val have plenty of.

"In this project, nature and submarine sculptures are mingled, because spots are provided for coral bits which will be implanted on the sculpture. Corals will become part of the architecture. As months and years pass by, these coral implants will themselves become the sculpture," said Val.

And as the three bronze sculptures and their concrete base -- each wearing several tonnes -- were placed last month on the sea bed at a depth of 12m on a location just south of Koh Tao, the first signs of an osmosis between the creation of the mind and the creation of nature emerged.

"The day after the installation, we dived with the New Haven team to connect the blocks with each other. Some small fish had already made a home around the sculptures. Plankton was already growing on one of my bronze characters," said Val.

"So all this was changing the environment. The sculptures became the starting point of life and nature will by itself modify the structure. It is a dream world with characters living in an environment which is not their usual one, as I can imagine there are worlds out there which we don't know and which I perceive the existence."

The logistical challenge of installing 2 tonne works of art on the sea floor, which required great accuracy from the time the crane on the barge lifted and plunged the bronze sculptures in the water, also provided a binding time for Val's team of workshop managers and workers, most of them from Isan.

"This project strengthened the team. Some of them had never gone to sea. It was a moment of strong common motivation, an important moment for the team," said Val. The three bronze figures of "Ocean Utopia", between 1.5-3m in height, are now getting used to their new environment and swimming neighbours. All divers in this part of Koh Tao can see the three pieces of art, which are forming a large triangle, each being around 10m distant from the others. Only experienced snorkellers can come close to the sculptures as they are at a 12m depth, but for divers it will be like a stroll in the park.

"If you are close to one of the sculptures, you can see the contours of the other one. Visiting the nearby submarine pinnacle and going to see the three sculptures will be an excursion in itself," says Goutard. 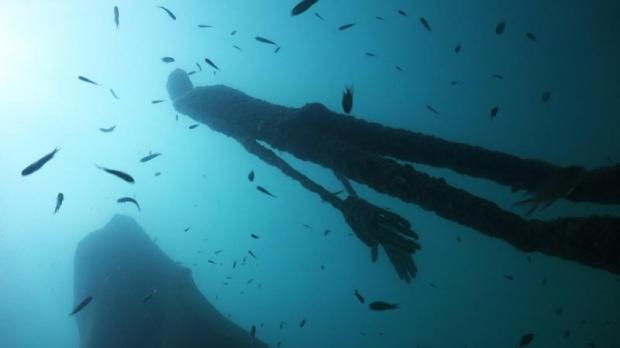 The sculptures after their installation on the seabed. 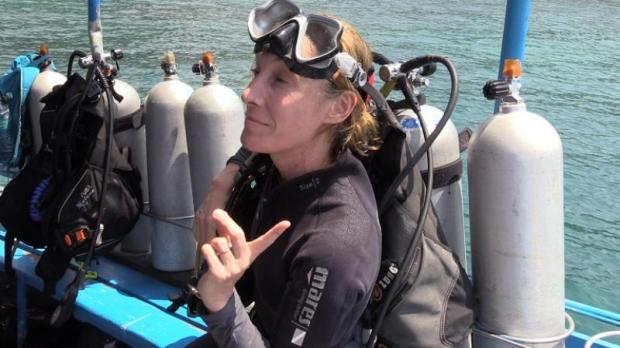 Val on the barge after a dive to monitor the sculptures.