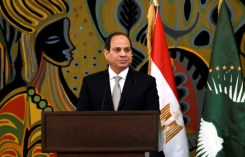 Deputies also backed other sweeping changes to the constitution including to give the military greater influence in political life as well as granting Sisi more control over the judiciary.

The amendments are to be put to a public referendum whose date is to be announced on Wednesday.

"The president's current term shall expire at the end of six years from the date of his election as president in 2018," reported the official Al-Ahram news website and broadcaster Nile TV.

"He can be re-elected for another (six-year) term."

Parliament speaker Ali Abdel Aal said 531 deputies voted for the amendments and 22 against, according to Al-Ahram.

He won his first term as president in 2014 and was re-elected in March 2018 with more than 97 percent of the vote, after standing virtually unopposed.

His government has been widely criticised by human rights groups for the repression of political opponents.

But Mohamed Abu Hamed, a member of parliament who pushed for the constitutional amendments to keep Sisi in power, was adamant the changes were needed to allow him to complete political and economic reforms.

"The constitution in 2014 was written under tough exceptional circumstances," he told AFP.

The deputy hailed Sisi as a president who "took important political, economic and security measures... (and) must continue with his reforms," in the face of the unrest gripping neighbouring countries.

The vote comes after veteran presidents were ousted both in Algeria and Sudan and amid an escalation of the conflict in Libya.

Keeping Sisi in power, he added, reflected "the will of the people".

Al-Ahram's website said MPs carried Egyptian flags as they gathered for the vote inside the parliament while nationalistic songs played in the background.

Wall-to-wall banners and billboards have flooded Cairo's streets in the past few weeks urging people to take part in the referendum.

Many feature slogans implicitly urging people "do the right thing" by voting in favour of the amendments. Others sponsored by the pro-government Nation's Future party call outright for a "Yes" vote.

Such banners have enveloped Cairo's iconic Tahrir Square, the site of the 2011 uprising that toppled longtime ruler Hosni Mubarak.

The amendments were initially introduced in February by a parliamentary bloc supportive of Sisi and updated this week after several rounds of debates.

They extend the presidential term from four to six years but keep it limited to a maximum of two terms.

The 596-seat parliament, which is dominated by Sisi loyalists, was elected in 2015, about a year after Sisi took office.

Since Sisi overthrew Morsi, Egypt has drawn heavy international criticism for its sweeping crackdown on dissent.

The authorities have jailed thousands of Morsi's supporters as well as liberal and secular activists, including a popular blogger, actors, singers and journalists.

"These amendments would take us back to a dictatorship fit for the Middle Ages," Waked told a news conference by rights groups in Geneva.

"Where is there stability in a country that jails children... that treats people badly or that kills?" he asked.

Amnesty International said that by approving the amendments, the parliamentarians had shown a "complete disregard for human rights".

"These amendments aim to expand military trials for civilians, undermine the independence of the judiciary, and strengthen impunity for human rights violations by members of the security forces," said Magdalena Mughrabi, Amnesty's deputy director for the Middle East and North Africa.

Ahead of the vote, Human Rights Watch said the amendments would "institutionalise authoritarianism".

When Sisi visited Washington for talks with US President Donald Trump last week, HRW urged Congress to withhold endorsement of his bid to extend his rule.

"Congress needs to use its levers to pressure the Egyptian president to reverse course, starting with withdrawing these constitutional amendments set to consolidate authoritarian rule," said HRW's Michael Page.

Other constitutional amendments include a quota for women's representation of no less than 25 percent in parliament and forming a second parliamentary chamber.