TOKYO: Two elderly passengers from the coronavirus-hit cruise ship moored near Tokyo have died, public broadcaster NHK said on Thursday, as a second group of passengers began disembarking after two-weeks quarantined onboard.

More than 620 of the passengers on the Diamond Princess liner have been infected on the ship, which has been quarantined since Feb 3, initially with about 3,700 people on board.

NHK, citing a government source, said the passengers were both Japanese, a man and woman in their 80s.

Meanwhile, Beijing reported a big drop in new coronavirus cases on Thursday, fuelling hopes the epidemic is nearing its peak,

The death toll in China rose to 2,118 as 114 more people died, but health officials reported the lowest number of new cases there in nearly a month, including in the hardest-hit province, Hubei.

More than 74,000 people have been infected in China and hundreds more in some 25 countries, with Iran reporting two deaths, the first fatalities in the Middle East.

The rapid spread of the disease - Japan has well over half of the known cases outside China - has sparked criticism of authorities just months before Tokyo is due to host the Summer Olympics.

In a move to reassure the public, the health ministry also issued a statement in both English and Japanese that said all passengers had been required to stay in their cabins since Feb 5 to contain the virus.

Public criticism of the government has played out in social media.

"There is no need for further discussing this," he said in a tweet, apologising to "those who got involved".

He later told a news conference he took down the video because he was informed conditions on the ship had improved.

About 500 passengers were set to disembark on Thursday while another 100 people were to leave for chartered flights home, a health ministry official said.

An initial batch of passengers who had tested negative and shown no symptoms left the vessel on Wednesday.

Those who have shared a room with people testing positive were required to remain in quarantine, as were crew. The ministry could not confirm how many people remained on board, or when disembarkation would be complete. 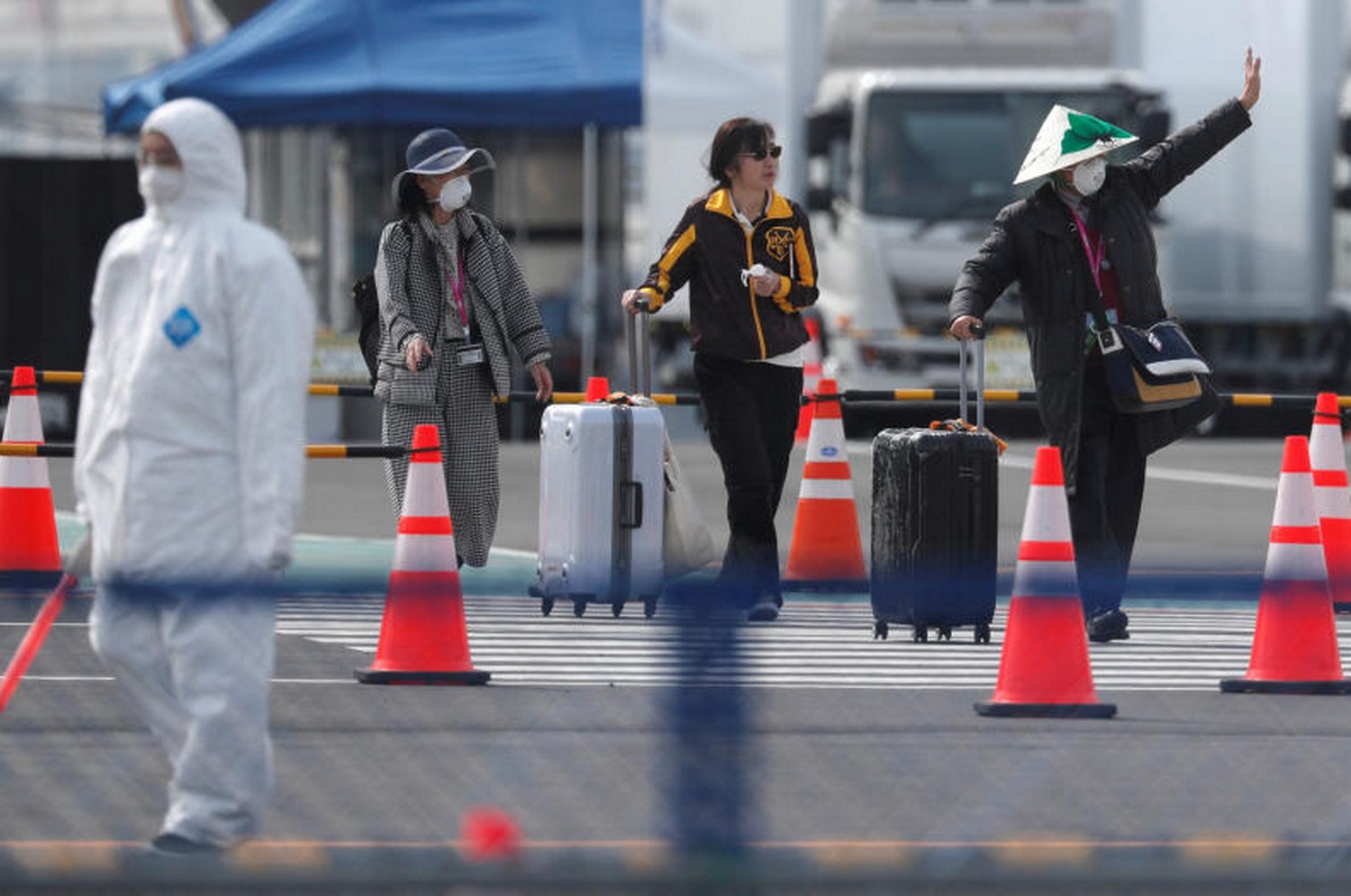 More than 150 Australian passengers arrived home after a pre-dawn departure from Tokyo's Haneda airport. They face another 14-day quarantine.

Some Hong Kong passengers also went home, while Canadians were due to leave on a charter flight in the early hours of Friday, Tokyo time, a Canadian government spokeswoman said. An evacuation flight was also being arranged for British nationals to leave Tokyo on Friday.

Earlier in the week, the United States evacuated more than 300 nationals on two chartered flights.  About 45 remained on board the cruise ship as of Thursday.

Americans flown back will have to complete another 14 days quarantine, as will returning Hong Kong residents.

Disembarked Japanese passengers, however, face no such restrictions, a decision that has sparked concern.

Japan's chief cabinet secretary, Yoshihide Suga, when asked on Wednesday why Japanese leaving the ship did not have to spend another two weeks in quarantine, referred to the advice of Japan's National Institute of Infectious Diseases (NIID).

The NIID said there should be no problem if people had shown no symptoms for 14 days and had tested negative for the virus during the period their health was under surveillance.