Tracy Wong, wearing a face mask and holding a sign, takes part in a rally to raise awareness of anti-Asian violence, near Chinatown in Los Angeles, California, on Feb 20, 2021. (AFP photo)

SAN FRANCISCO: Weary of being cooped inside during the pandemic, Vicha Ratanapakdee was impatient for his regular morning walk. He washed his face, put on a baseball cap and face mask and told his wife he would have the coffee she had prepared for him when he returned. Then, on a brisk and misty Northern California winter morning last month, he stepped outside.

About an hour later, Vicha, an 84-year-old retired auditor from Thailand, was violently slammed to the ground by a man who charged into him at full speed. It was the type of forceful body blow that might have knocked unconscious a young football player in full protective pads. For Vicha, who stood 5 feet, 6 inches and weighed 113 pounds, the attack was fatal. He died of a brain hemorrhage in a San Francisco hospital two days later.

Captured on a neighbour’s security camera, the video of the attack was watched with horror around the world. Among Asian Americans, many of whom have endured racist taunts, rants and worse during the coronavirus pandemic, the killing of a defenceless older man became a rallying cry.

In the past year, researchers and activist groups have tallied thousands of racist incidents against Asian Americans, a surge in hate that they link to former President Donald Trump repeatedly referring to the coronavirus as the “Chinese virus”. Vicha’s family described his killing as racially motivated, and it spurred a campaign to raise awareness by many prominent Asian Americans, who used the online hashtags #JusticeForVicha and #StopAsianHate.

“The killing of Vicha was so plain as day,” said Will Lex Ham, a New York-based actor who, after watching the video, flew from New York to San Francisco to help lead protests and safety patrols in Asian neighbourhoods. “There was no longer any way to ignore the violence that was happening to people who look like us.”

Antoine Watson, a 19-year-old resident of neighbouring Daly City, was arrested two days after the attack and charged with murder and elder abuse. He has pleaded not guilty, but his lawyer admits that his client had an “outburst of rage”.

Chesa Boudin, the San Francisco district attorney, said Vicha’s death was heinous. But he said there is no evidence to suggest it was motivated by racial animus.

Still, at a time when demands for racial justice have rocked a demographically evolving nation, the killing of Vicha was notable for the galvanising anger it brought to a diverse group that encompasses people of Chinese, Japanese, Korean, South Asian and Southeast Asian heritage. The killing of a Thai man in America has given voice to a united community under the umbrella of an Asian American identity. 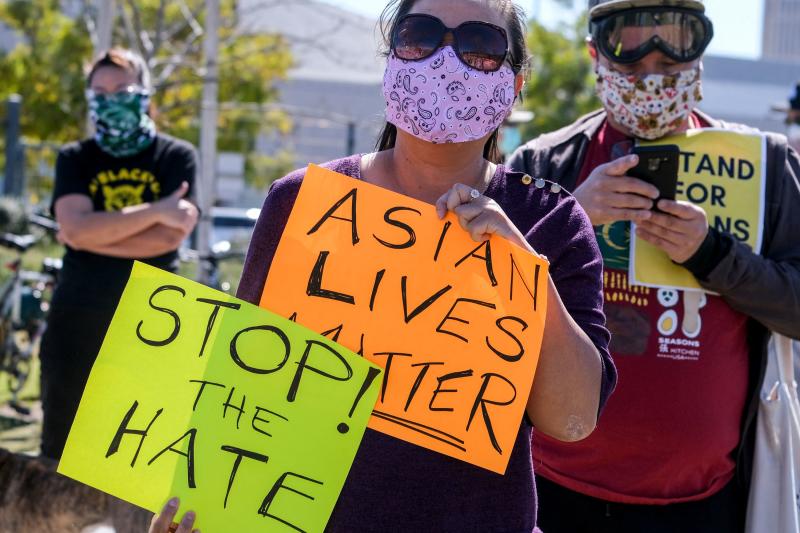 In the weeks since it happened, Vicha’s death has become a symbol for the vulnerability that many in the Asian American community feel in this moment.

For his family, the death has been devastating both in California and abroad. In Thailand, the killing was front-page news and described as barbaric, a life cut short in a family where siblings typically live into their late 90s, relatives said.

Since his retirement in 1996 from Kasikornbank, one of Thailand’s largest financial institutions, Vicha had travelled between San Francisco, where his eldest daughter lives, and Thailand, where his youngest does.

For months Vicha had been pining to return to Thailand but was unable to because of the pandemic. He disliked the chilly and wet San Francisco winter and missed his favourite southern Thai dishes and his extended family and friends.

His brother, Surachai Ratanapakdee, 89, now the only surviving sibling of eight children, remembered Vicha as studious and curious about the world outside the rice paddies, watermelon fields and orchards of the family farm.

“Vicha was one of only a few people in the village who spoke English well,” Mr Surachai said.

Vicha went on to study at Thammasat University in Bangkok, one of the country’s most prestigious institutions.

His older daughter, Monthanus, described her father as a devoted Buddhist. She remains puzzled why on the morning of the attack he left without his Buddhist amulet, a talisman of protection that he always wore around his neck.

When Ms Monthanus expressed her desire to go to graduate school two decades ago, Vicha supported her decision to enroll in business school at the University of California, Berkeley. After her graduation, when Ms Monthanus married and decided to stay in San Francisco, Vicha and his wife came to help raise their grandchildren.

At the time of the attack, Vicha was only months away from being able to return to Thailand. On Jan 15, he received the first shot of the Moderna vaccine.

“We said, ‘Dad, we are going to go back soon!’” Ms Monthanus recalled.

Vicha’s second shot was scheduled for Feb 12, an appointment he would not live to make.

His killing came at a time when other disturbing images and reports were emerging from across the San Francisco Bay. Three days later an attacker shoved a 91-year-old man in Oakland’s Chinatown to the ground, another video that rocketed around the internet.

That older victim has been wrongly described in many news accounts as Asian. Court documents give the victim’s name as Gilbert Diaz, and Carl Chan, a community leader and president of the Oakland Chinatown Chamber of Commerce, said the victim was Latino. But Mr Chan said he has tallied more than two dozen assaults against Asian American victims in Chinatown, including two other people shoved by the assailant who knocked down Mr Diaz.

Crime data from the district attorney offices in San Francisco County and Alameda County, which includes Oakland, show that people of Asian descent were less likely last year to be victims of crimes than other ethnic groups. In San Francisco, where 36% of the population is of Asian descent, 16% of crime victims of known ethnicity were Asian, a similar situation to Alameda County.

But leaders of the Bay Area Asian community said crime statistics are misleading because Asian American residents, especially immigrants, often do not report assaults or robberies out of mistrust of the system or language barriers. What is incontrovertible, said leaders of the Asian American community nationwide, is that the pandemic created a climate of fear and a feeling of insecurity from New York to California. In the past week the California Legislature approved $1.4 million in funding to track and research racist incidents against Asian Americans.

“Our seniors are afraid to walk their own streets,” Mr Chan said.

Last year Ms Monthanus, Vicha’s daughter, was twice accosted on the street by people who told her to leave the country because, the attackers said, Asians had caused the coronavirus.

Mr Watson’s lawyer, Sliman Nawabi, a public defender, said his client would not have been able to identify Vicha’s ethnicity through his face mask, cap and winter clothing. Mr Nawabi described Mr Watson as someone who had struggled with anger.

In the hours before the attack, Mr Watson had a string of setbacks. He left his home because of a family dispute and got in a traffic accident in San Francisco at 2am. He was cited by the San Francisco police for running a stop sign and reckless driving and then slept that night in his car.

On that morning a number of security cameras in the area captured Mr Watson banging a car with his hand, according to Mr Boudin, the district attorney.

“It appears that the defendant was in some sort of a temper tantrum,” Mr Boudin said.

It was then that Vicha walked up Anzavista Avenue, a street with views of skyscrapers in the city’s financial district.

A witness told police officers that Mr Watson said something to the effect of, “What are you looking at?” A security camera located inside a neighbour’s apartment captured Watson charging across the pavement toward Vicha, who briefly turned to his assailant before the impact.

Two days after the attack, Ms Monthanus and her mother went to the spot where Vicha was killed and saw that his blood still stained the pavement. They scrubbed the sidewalk with brushes and wondered why no one from the city had come to do the same.

Vicha’s cremated remains have been placed in two urns. Ms Monthanus said she and her family will charter a boat under the Golden Gate Bridge and scatter some into the Pacific Ocean.

She plans to bring the other urn back to her father’s hometown in southern Thailand, where the local Buddhist temple has a stupa that holds the family’s remains. “His brothers and sisters are there,” Ms Monthanus said. “They will all be together.”

The amulet, a precious family heirloom, will be passed to the next generation, Ms Monthanus said.

“He always told me that if something happened to him, this must be passed on to grandchildren,” she said. 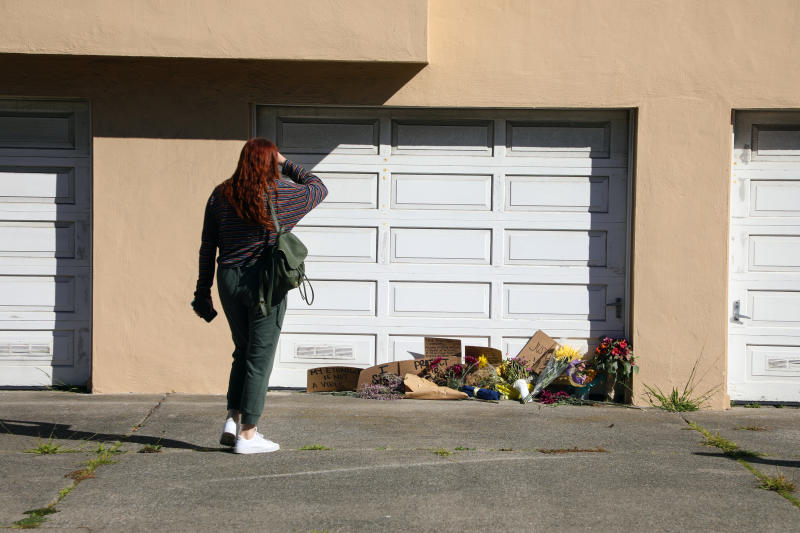 A makeshift memorial in San Francisco, Feb 17, 2021, at the spot where Vicha Ratanapakdee, an 85-year-old retired auditor from Thailand, was violently and fatally slammed to the ground . (Jim Wilson/The New York Times)