A relative of a man who died of Covid-19 waits for the burial at a graveyard in New Delhi on Friday. (Reuters/Danish Siddiqui)

The global Covid-19 death toll passed three million on Saturday as the pandemic continues to speed up despite vaccination campaigns, leading countries like India to impose new lockdowns to fight spiralling infection numbers.

It is the latest grim milestone after the novel coronavirus surfaced in central China in December 2019 and went on to infect more than 139 million people, leaving billions more under crippling lockdowns and ravaging the global economy.

An average of more than 12,000 deaths were recorded globally every day in the past week, shooting the overall toll past three million early Saturday.

For comparison, 3 million people is more than the population of Jamaica or Armenia, and three times the death toll of the Iran-Iraq war that raged from 1980-88.

And the pandemic is showing no sign of slowing down: the 829,596 new infections reported worldwide on Friday was the highest number yet.

The daily average of 731,000 cases registered over the last week is also close to being a record.

New Delhi went into a weekend lockdown on Saturday as the world’s second-most populous nation recorded 234,000 new cases and 1,341 deaths.

India now has three times the daily cases of the United States, the world’s worst-hit nation, and families are clamouring for drugs and hospital beds.

Hopes that South Asian countries might have seen the worst of the pandemic have been dashed, with India recording over 2 million new cases this month alone and Bangladesh and Pakistan imposing new shutdowns.

Udaya Regmi of the international Red Cross said the “truly frightening” South Asian surge was a “wake-up call to the world”.

“Vaccines must be available to everyone, everywhere, rich and poor to overcome this terrible pandemic,” Regmi added.

Richer countries that have waged mass inoculation efforts have seen their virus numbers plummet. Britain, which has given 60 percent of the population at least one vaccination dose, now records around 30 deaths a day — down from 1,200 in late January.

In Japan, rising virus cases have stoked speculation that the Olympic Games — postponed last year due to the pandemic — could be cancelled.

Prime Minister Yoshihide Suga, in his first meeting with US President Joe Biden, said his government was listening to experts and doing its “utmost” to prepare for the Tokyo games in July.

In Brazil, the country with the third-highest death toll in the world, night shifts have been added to several cemeteries as diggers work around the clock to bury the dead.

One of these is Vila Formosa, the largest cemetery in Latin America and a showcase for the lethal cost of the pandemic in Brazil, where more than 365,000 people have died from Covid-19.

“We try not to get upset in our work, but it is sad, it is a lot of people,” one of the gravediggers there said after a long shift.

Despite the high infection rate, the government of Brazil’s most populous state, Sao Paulo, announced it would allow businesses and places of worship to reopen from Sunday. (Story continues below) 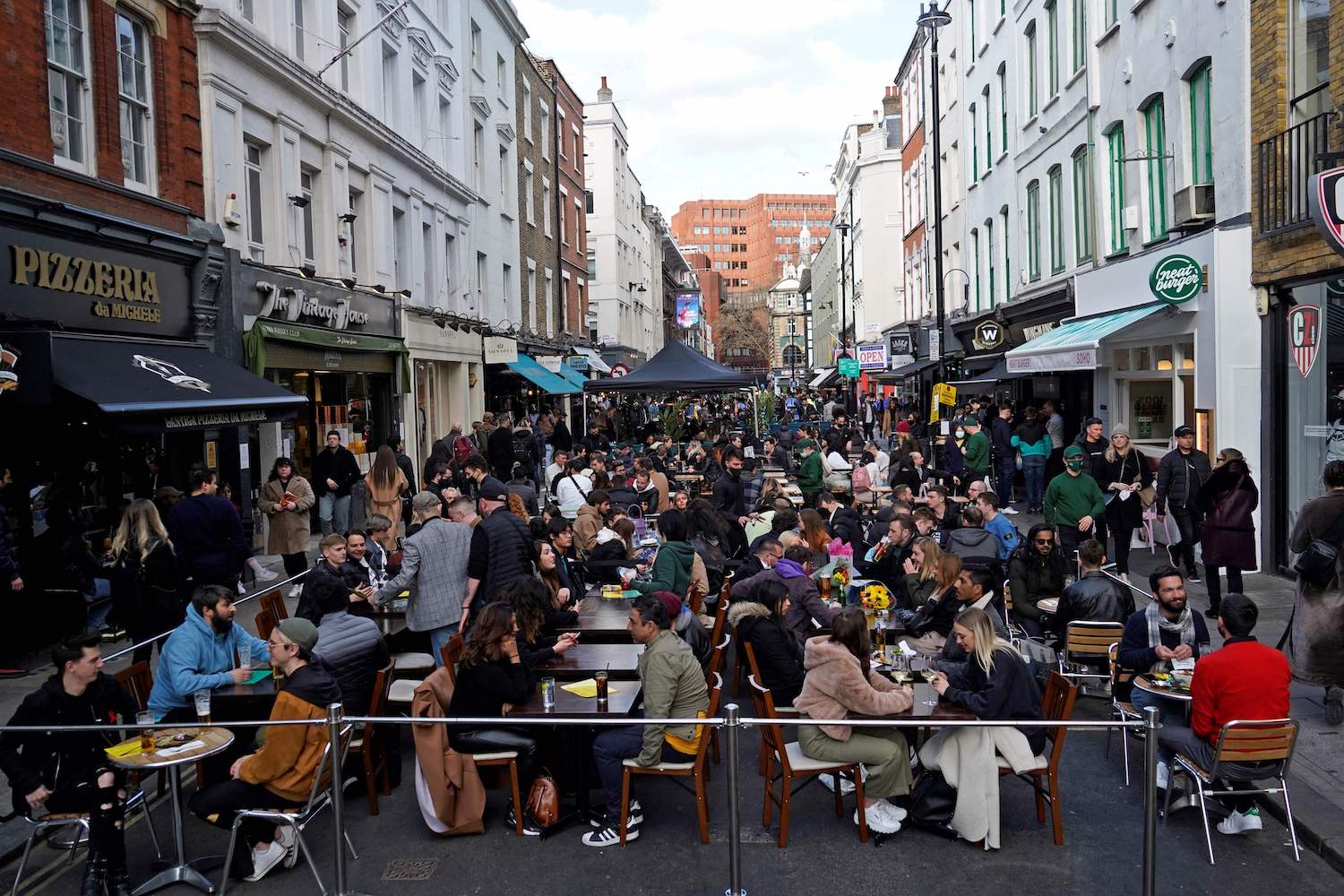 People eat and drink at tables on a street in the Soho area of London on Friday, as Britons celebrated the end of months of severe pandemic restrictions. (AFP Photo)

But there was better news in Europe, where some countries are easing their lockdowns in response to not only fatigue, but falling infection numbers and progress with vaccinations.

Italy announced on Friday that it would ease coronavirus restrictions for schools and restaurants from April 26.

Italy will also allow up to a thousand spectators at outdoor events from May 1, when it eases its stadium fan ban in regions less affected by the coronavirus.

In more good news for Britons after the partial reopening of society this week, Germany on Friday removed the United Kingdom from the list of risk zones for coronavirus infections, meaning that travellers will no longer need to quarantine upon arrival.

Spain, meanwhile, extended the mandatory quarantine of passengers arriving from 12 countries in South America and Africa, including Brazil and South Africa, over concerns about more transmissible variants.

After a national lockdown a year ago led to an economic slump, the Indian government is desperate to avoid a second stoppage. But Delhi joined Mumbai in ordering all but essential services to close.

Landmarks such as the historic Red Fort where tens of thousands of people would normally gather were deserted. “Not one person has turned up,” said security guard Anil Dayan. Police checked many of the cars that strayed onto the streets.

The city of more than 20 million people now has the most daily cases in India and restaurants, malls and gyms were all closed. Weddings can go ahead with guests limited to 50 people, while only 20 can attend funerals.

Uttar Pradesh state, home to some 240 million people, has ordered a one-day lockdown on Sunday.

Similarly, the northern state of Uttarakhand has restricted gatherings to 200 people — but exempted the huge Hindu Kumbh Mela festival.

The gathering in Haridwar has attracted up to 25 million people since January, including some 4.6 million this week alone, with most people ignoring Covid guidelines.

More than 1,600 people tested positive for coronavirus in Haridwar in barely three days this week and experts fear that many devotees will take the virus back to their home towns and villages.

India’s drive to vaccinate its 1.3 billion people has also hit obstacles, with just 117 million shots administered so far and stocks running low, according to some local authorities.

In Malaysia, a total of 40 healthcare workers have been infected by coronavirus after the completion of their vaccination in Malaysia, Health Director-general Noor Hisham Abdullah said on Saturday.

“It is clear that we still can be infected after completion of vaccination but perhaps less in severity,” he said. “No one is safe until everyone is safe.”

In Australia, authorities said the death of a 48-year-old woman in New South Wales was “likely linked” to the AstraZeneca vaccine, though the case was “complicated” by underlying conditions.

Federal Health Minister Greg Hunt said the woman was inoculated before the government’s April 8 announcement that the Pfizer vaccine was preferred for people under the age of 50, given concerns about blood clotting.

“Vaccines are overwhelmingly safe, recommended and effective,” Hunt said, adding that they remain under continuous review by the immunisations task force.

Australia’s most populous state is planning a major overhaul of its Covid inoculation programme, including a possible increase in the volume of Pfizer doses and distribution of new alternative vaccines, the Sydney Morning Herald reported.

Rare blood clots and high platelet counts after taking AstraZeneca vaccine led to death in about 40% of 39 identified cases, according to an editorial in the New England Journal of Medicine.

Most of the reported cases were women younger than age 50, the editorial said. The authors called for more study of whether certain population groups would be more suitable for certain Covid vaccines.

Canada’s most populous province, in a desperate bid to control a third Covid wave, has introduced its strictest measures yet to restrict the movement of people. Ontario has set up checkpoints with neighbouring Quebec and Manitoba for the first time in Canada’s outbreak.

The government of Premier Doug Ford said it would extend an emergency stay-at-home order to six weeks from four. Essential stores such as supermarkets and pharmacies will operate at 25% of capacity.

“My friends, we’re losing the battle between the variants and vaccines,” Ford said.