Five more graves have been found at another Songkhla jungle camp where Rohingya were penned like cattle and died, as world outrage grows. (Photos by Pornprom Satrabhaya)

Five more graves have been found near a newly discovered migrant detention camp in the Padang Besar jungle in Songkhla's Sadao district.

The discovery of the jungle camp, which was deserted, came amid calls by the United States for a speedy and credible inquiry into the discovery of dozens of graves and illegal migrant camp sites.

Police spokesman Pol Lt Gen Prawut Thawornsiri said the camp and the graves were located about 1km east of the first site discovered on Friday where 26 bodies were discovered in a 30-grave burial site.

The discovery of the jungle camp, just 200m from the Malaysian border, followed an order by army commander Udomdej Sitabutr for security units to patrol the border jungle. A unit found the second camp on Monday night.

It is believed the camps were used to hold migrants and the bodies found in the first camp were thought to be Rohingya and human trafficking victims, Pol Lt Gen Prawut said.

Led by Songkhla Provincial Police chief Ampol Buarubporn, a force of 50 police and rescue staff walked 30 minutes through the jungle Tuesday to inspect the camp.

Eight temporary shelters made from forest timber were found in the camp which was estimated to cover at least one rai. The camp comprised sleeping shelters, two kitchens, a toilet and two uncompleted shelters.

The main sleeping shelter was about 8x13m, and could hold about 30 people.

Rescue staff dug up two of the five suspected graves but did not find bodies.

"We have patrolled for about 70km in the Padang Besar border jungle," Pol Maj Gen Ampol said.

"This is to clear the area. So if new groups come, we will know."

Meanwhile, a spokesman for the US State Department said the US was in contact with the Thai government, the United Nations and the International Organisation for Migration over the discoveries and understood that Thai authorities were actively investigating reports of other camps, Reuters reported.

"We encourage a transparent, credible and expeditious inquiry into this case," the official said. "We urge Thai authorities to investigate fully these deaths and camps, and prosecute those responsible."

Warrants have been issued for the arrest of eight people for alleged involvement in  human trafficking networks. 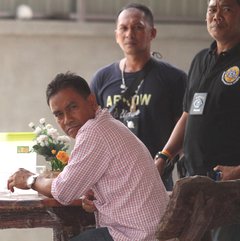 A fifth suspect, Yali Khrem, headman of Moo 8 village in the Songkhla town of Padang Besar, turned himself in to police at Padang Besar station Tuesday morning.

Police day raided seven locations in Padang Besar Tuesday in search of the remaining suspects but to no avail. They are Prasit Lemleh, deputy chief of Padang Besar municipality, Chaoren Thongdaeng and Pakapol Benlatae.

He also signed on Monday an order transferring Satun police chief Pol Maj Gen Suthorn Chalermkiat to an inactive post at the centre.

Pol Lt Gen Prawut said an inspection of the graves at the first site indicated the bodies were buried properly, in line with religious beliefs, suggesting the dead were not the victims of a massacre.

He said police will next focus their investigation on the trafficking routes and seek help from Malaysian authorities if evidence suggests any Malaysians are involved.

Pol Lt Gen Prawut said Rohingya migrants can be divided into three groups: Those who can afford to be sent to a third country; those who are waiting for employment in other countries; and those who have fled their home country with no plans or have been rejected by potential employers.

Malaysian ambassador to Thailand Nazirah Hussain told the Bangkok Post she was in no position to comment on a report which indicated the detention camps are situated on the Thai-Malaysian border. (Story continues below) Meanwhile, Sakkriya Ratchameong, 50, an elder brother of one of the detained suspects, Mr Ali, maintained his brother has nothing to do with human trafficking.

"I don't think he was involved in the human trafficking gang. But if he was, he would just be a small fish," Mr Sakkriya said. "The big players have not been arrested."

Aran Suwanraksa, president of Padang Besar municipality, told the Bangkok Post he has issued an order to dismiss his deputy Mr Prasit, a suspect who is still at large.

Mr Prasit was allegedly involved in human trafficking two years ago when a group of Rohingya were found to have been smuggled into the Pasang Besar jungle, but was cleared of wrongdoing because of insufficient evidence.

Mr Aran said he knew of human trafficking activity in Padang Besar but had nothing to do with it. "I can say I'm clean," Mr Aran said.

"I'm not involved in human trafficking."

The daily infection rate is rising, with confirmed new cases up 26% on Tuesday from 1,917 on Monday, and coronavirus-related deaths also increasing.