Trafficking fight to carry on despite TIP
Thailand
General

Trafficking fight to carry on despite TIP

Failure by US to upgrade Thai status would be a bitter blow.

But he says that the US policy not to consider Thai government action in tackling trafficking after March this year "is not fair", as it fails to take into account the latest developments.

Pol Gen Ake holds the key to the government's drive against human trafficking on the ground.

He heads the Centre for the Protection of Children, Youth and Women and is in charge of the investigation following the discovery in May of Rohingya mass graves, detention camps and human trafficking networks in Songkhla, Satun and Ranong.

In last year's TIP report which downgraded Thailand from the Tier 2 Watch List to Tier 3, the US cited Thailand for failing to tackle human trafficking on many fronts, such as failing to enforce the law, to arrest and prosecute the main players behind the networks, take action against officials who are involved, or who are turning a blind eye to trafficking.

Thailand was also cited for not having a system of separating illegal migrants from trafficking victims, or a system that protects and cares for victims, including those in the fishing industry.

"The Prayut government now sets a clear policy against human trafficking," said Pol  Gen Ake, refusing to compare current policy with that of past governments. 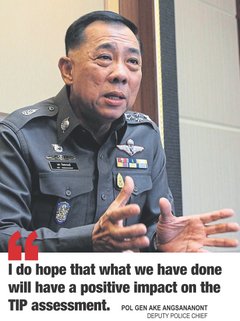 Many laws have been changed including the human trafficking law which now gives state officials greater power to shut down operators suspected of being involved in trafficking such as the owners of karaoke bars, factories or even fishing boats.

Greater protection also is given to people who provide information about trafficking and there are now funds to help prevent it.

"Still, human trafficking cannot be tackled by police alone. All parties need to be involved such as immigration, fisheries, labour, and non-government organisations. We need to head together in the same direction.

"We need to turn this crisis into an opportunity and forge a better system of prevention, suppression and enforcement," he told the Bangkok Post.

One new approach is for police to work with prosecutors during the investigation process as they prepare their cases for the courts.

They have taken this tack following the discovery of the Rohingya mass graves and detention camps in Songkhla near the Thai-Malaysian border.

Pol Gen Ake is the police point man in the investigations and works with top officials from the Office of the Attorney-General and the provincial public prosecutor.

"Police are not doing this alone. We are working with prosecutors. I cannot make the decisions myself. We need assistance from provincial officials and the administration," he said.

This collaboration aims to ensure that cases that go to court "stick". Pol Gen Ake admits investigating the Rohingya case is not easy for his staff.

The money involved in areas such as Pedang Besar in Songkhla, Satun and Ranong provinces - known as Rohingya trafficking centres - is considerable.

"Local politicians and officials gain benefits from the trafficking business in these areas. The pattern of their networks and financial connections are similar. The system of patronage is considerable.

The influence of some local officials is more powerful than that of a provincial governor, he said. And he admits, for the moment, there is insufficient evidence to link the current human trafficking cases to these politicians.

The probe into the discovery of detention camps on the Thai-Malaysian border, and the government's broader crackdown on trafficking have taken on new urgency since the boat people crisis unfolded last month. Thousands of Rohingya and Bangladeshis set off from Myanmar in search of a better life in Thailand, Indonesia and Malaysia.

Almost 100,000 of these people have made the journey since last year, and the UN High Commissioner for Refugees calculates 25,000 set off in the first quarter of this year, a twofold increase over the same period last year.

Some of the boat people are victims of trafficking. Those intercepted at sea have spoken of Thais who kept them at detention camps before charging their families for the "fare" to complete their journeys to Malaysia. Others say some of the boats on which they made passage were Thai-owned.

Gen Ake said individuals who have lost benefits from the recent crackdown are likely to fight back by making accusations and spreading rumours against police and officials. Still, Gen Ake said police involved in the investigations are determined to move their probe and cases forward.

"I do hope that what we have done will have a positive impact on the TIP assessment. I hope there is some good news," he said.

He admitted keeping Thailand on Tier 3 could have an impact on the morale of his staff. "But I will tell my staff that we must continue to do our duty to help fellow human beings who are victims of trafficking."

"Personally, I think they need to update the information in their assessment. If the TIP report is released in June it should take into consideration the latest developments." 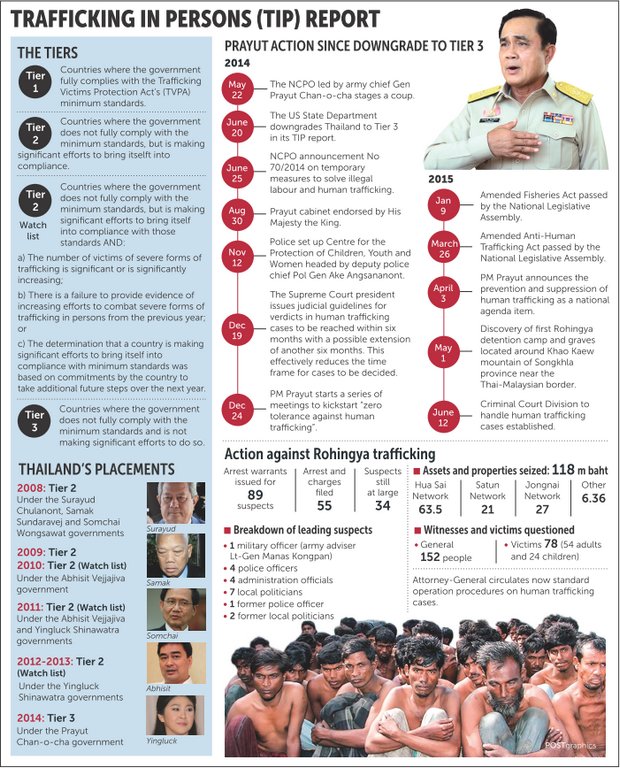 Gen Wit Devahastin na Ayudhya, the new leader of the Ruam Phaen Din Party, insists the party is not an offshoot of the ruling Palang Pracharath Party (PPRP).

The current Thai-Chinese joint air force exercises have been two years in the making and have nothing to do with the ongoing tension between China and Taiwan - air force.