BRUSSELS - The EU said Tuesday it will for the first time deploy observers in Myanmar's upcoming elections when the opposition led by Aung San Suu Kyi is expected to make significant gains against the military-dominated government. 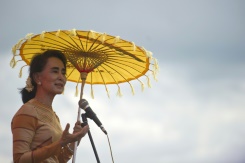 "Elections held in a peaceful and inclusive environment will help to consolidate irreversible reforms in the country," Mogherini said.

EU diplomats and a separate mission from the European Parliament will also observe the vote, it added.

Suu Kyi's National League for Democracy won elections in 1990 but the military rejected the results and repeatedly put her under house arrest until 2010.

She won a seat in parliament in 2012 as the military eased their hold on the country but Suu Kyi cannot seek the presidency under rules which bar the position to a person who married and had children with a foreigner.

The NLD has vowed to change the charter to reduce the army's role and overturn the presidency restrictions.

Suu Kyi told supporters last week they should not be afraid when they cast their votes in the November 8 election.

"It's not 1990 anymore, so people don't need to be afraid. They can be brave to vote for the National League for Democracy," she said.