Where time and space cease to exist
Life
Arts & Entertainment

Where time and space cease to exist

How do we picture the world and ourselves? That is one of the key questions asked in "An Atlas Of Mirrors", the fifth edition of Singapore Biennale, which opened last week at various venues with the Singapore Art Museum (SAM) and SAM at 8Q as the main spaces. As many as 63 artists and collectives joined and the result is a gushing forth of narratives -- collective and personal, historical and contemporary, factual and imaginary.

Singaporean artist Lim Soo Ngee's Inscription Of The Island, a massive sculpture of a pointing index finger on SAM's front lawn, for instance, is the artist's recreated mythical history of Singapore. Bangladeshi Munem Wasif's set of photographs, on the other hand, opts for actual geological spots in portraying the subtlety of ongoing political conflict. The outstanding element in the fair is the sense of dynamism -- stories are mirrored back and forth until boundaries and time for these artists are almost eliminated.

In this dialogue, Thai artists join in with unreserved force, and names like Araya Rasdjarmrearnsook and Sakarin Krue-on alone are enough to tempt viewers from home ground to make the trip there. The young Thai artist in this is Pannaphan Yodmanee, and with her new massive installation Aftermath, she somehow finished what she started with her previous work which was part of "Thailand Eye" exhibition earlier this year. 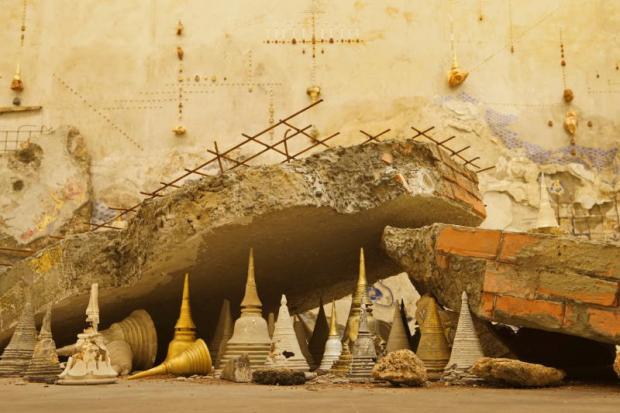 "I think it's important to have a mix of generations, we have three Thai artists from different generations," said John Tung, SAM's assistant curator. "All of these works are new commissions so they were conceptualised specifically to respond to the biennale."

In Aftermath, figurines of Buddha abound with pagodas set here and there among the concrete ruins as if the scene had been through some sort of war. The backdrop of this disaster is a huge mural depicting a mapping of Buddhist cosmos. Tung said the work presents a possible disastrous outcome that could result from cultural differences, be it race or religion, in a globalising state.

For Sakarin Krue-on's work, which consists of archival objects, documentaries and a main video work, his interest lies in the fragmentation of culture which is forgotten as we move rapidly towards the modern age. Titled Kra-tua Taeng Seua (A Tiger Hunt), the work results from Sakarin's collaboration with the Wat Khuha Sawan Folk Play Company theatre troupe, and this is very poignant as such companies in Thailand have greatly diminished in recent years. 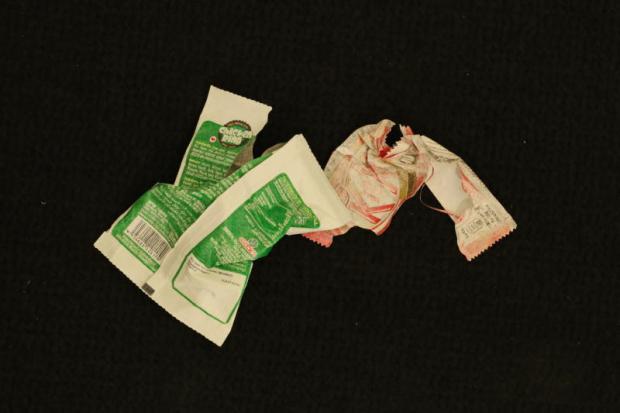 The black-and-white video work shows a re-enactment of this folklore about revenge and the relationship and friendship between humans and animals. The folklore that's typically thought as traditional and boring is fun with Sakarin's retelling through the style of a fast-paced silent film and it feels contemporary with his use of present-day urban landscape as the setting.

Perhaps the greatest highlight, not just among Thai but all artists in the biennale, is a room filled with Araya Rasdjarmrearnsook's video works. We know her through her evocative take on sexuality, animals and death, etc, and all of these questions are woven and collaged together once again in an overwhelming and disorientating five-channel video installation titled Jaonua: The Nothingness (King Of Meat: The Nothingness). 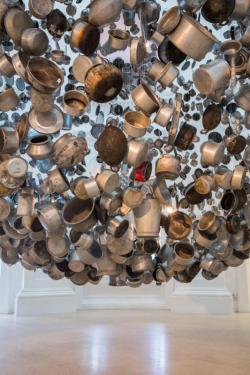 "What Araya has done is she has tracked from the point when you were born to the point where you die," said Tung. "It's about what defines us, what we consume, what we use to fulfil ourselves. It could be food or sex. The longing for people to look at us in a certain way. What she's trying to say is that all of this amount to nothingness in the end."

Though Japanese, Kentaro Hiroki is practically a Thai artist as he has lived and worked here for well over a decade. One can go through the entire show without noticing his works. At the Singapore Art Museum and SAM at 8Q, small pieces of rubbish lie discreetly in corners. They are actually colour pencil on paper, recreated realistically from pieces of trash found on the streets of Singapore.

The work on the Singapore Art Museum's top floor is accurately just that: a black forest. The Singaporean artist's work, a span of blackened wood logs lying on beds of charcoal that stretch the entire room, reflects ongoing deforestation activities.

The Unity Of N Movements by Jiao Xingtao

The Chinese artist arranged 100 mass-produced stool chairs together. Suddenly the objects acquire a certain gravity and visual strength they never could when standing individually. For the first time, we start wondering if such a chair is still an everyday object or a valuable piece of sculpture.

Cooking The World by Subodh Gupta

The Indian artist created an avalanche of used plates, cups, pails and pots, which are hung together with delicate threads in the hallway of the National Museum of Singapore, and suddenly we have a collection of individual stories in a collective platform. The installation text puts it quite succinctly: "They [the objects] refer to the parallel realities in a globalised, consumerist society."

With artificial flowers and a labyrinth of mirrors, the Chinese artist's work is an immersive installation that feels like the interior of a kaleidoscope. The disorientating effect of being inside the work and the infinite images from surrounding mirrors have served to eliminate the sense of subjectivity in the artist's recreated space.