Getting away with it
Life
Arts & Entertainment

Getting away with it

How do citizens hold the powerful accountable amid a culture of impunity?

From 1977 to 1988, there were at least 1,436 alleged cases of arbitrary detention, 58 forced disappearances, 148 torture, and 345 extrajudicial killings in Thailand. We know these figures because an NGO investigated and reported these cases at a time when the idea of human rights excited optimism about justice and the rule of law. Amnesty International encouraged international activists to protest individual cases. Thai authorities investigated and whitewashed each case. This became standard procedure. After a time the NGO gave up. Nobody was punished. 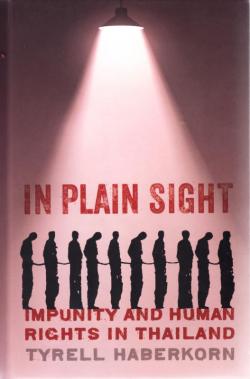 This vignette sums up the key themes of Tyrell Haberkorn's stunning book. Many people are victims of the abuse of power. Almost no one is held accountable or punished. Thailand seemed to welcome the idea of human rights and was among the first signatories of the Universal Declaration in 1948, but in practice nothing really changed. General Sarit announced that Thailand would abide by the declaration except in cases when it did not. In Haberkorn's argument, the "production of impunity", the fact that the powerful always get away with it somehow, is a defining characteristic of the Thai state. As her title stresses, the extraordinary thing is that all this goes on "in plain sight".

Haberkorn teaches at the University of Wisconsin-Madison. This book ranges from 1932 to the present. She examines various forms of arbitrary, absolute and abusive power across this period: arbitrary detention; authoritarian decrees, especially Article 17, which Sarit used to order summary executions that he then witnessed; the "red barrel" murders and burning of villagers during the Cold War; the amnesties for the atrocities at Thammasat University on Oct 6, 1976; cases of enforced disappearance, especially Somchai Neelapaijit in 2004; and the vexed responsibility for at least 94 deaths in the crackdown of May-June 2010.

The authorities who abuse their power are usually careful to cover their tracks, but not always so, whether because of carelessness or arrogance. In the archives Haberkorn found files with the revealing debate on legislating the amnesty for the atrocities of Oct 6. She is able to compare the investigation of power abuses by the human rights NGO, with the files on the standardised whitewashing by authorities. The "red barrel" murders and arson of villages came to light because of student activists. The records of the trial on Somchai's disappearance, when four police officers seen bundling him into a car got away scot-free, reveal the inbuilt biases of the judicial process. Haberkorn teases hidden meanings out of official records by showing what they leave out.

The author does not claim this account is comprehensive. Many themes and examples (such as Black May and the war on drugs) are left out. She urges others to follow her lead, and she shows with great ingenuity how it can be done.

This could be a very bleak book, but the author urges us to see it in a different light. Kathryn Sikkink argues that, on a world scale, the idea of human rights has prompted a "justice cascade" that has brought more powerful people to account than ever before. This cascade has not reached Thailand, but Haberkorn urges us to dream of a time of "memories after dictatorship", and meanwhile to celebrate and cheer anything that questions, resists and challenges the regime of impunity. Such as this superb book.