In 'Transforming Thanyaburi', students from Thammasat University reimagine the potential of a rapidly growing district in Pathum Thani

Due to the rapid pace of Bangkok's urbanisation other neighbouring provinces, including Pathum Thani, have also grown. Two urban design projects focusing on Thanyaburi district in Pathum Thani are included in the exhibition "Transforming Thanyaburi: Creative & Innovative Urban Futures In Pathum Thani" on view at 6060 Arts Space. "Transforming Thanyaburi" was created by Thammasat University students from the Urban Design & Development International Programme (UDDI) at the Faculty of Architecture and Planning.

The first project in "Transforming Thanyaburi" was created by sophomore students in the course UD223 Urban Intervention Studio in which they analysed and developed strategies to improve the urban conditions of Thanyaburi district. The other project was created by third-year students in the elective course UD351 Creative Cities which was divided into two parts -- the design of a creative city in Thanyaburi district and the design of a gaming simulation to promote public engagement.

Since most Thais are not familiar with urban design -- the main concept of this exhibition -- Federico Puggioni, associate director and lecturer with UDDI, and lecturer Adrian Lo explained what it means.

"Urban design is a combination of theory and practice that helps provide answers to urban problems of different complexities at different scales. It is an approach that keeps together different instances and tries to involve diverse players, including the citizen," Puggioni explained.

"Urban design is about shaping the public space between and around buildings, so it is larger in scope than architecture, but smaller than urban planning. We deal with streets, footpaths, plazas/squares, parks and landscapes to some extent, and common or open spaces of buildings -- things that citizens take for granted as they go about their daily activities," Lo added.

Thanyaburi district was chosen to be a research site as Pathum Thani is an important province in terms of society and economy. It is developing and will soon become urbanised in the future. Puggioni explained that they wanted to exhibit projects created in classrooms because the public does not know what urban design is and what urban designers deal with. It is also a challenge to communicate with the public problems that students discovered and possible solutions. 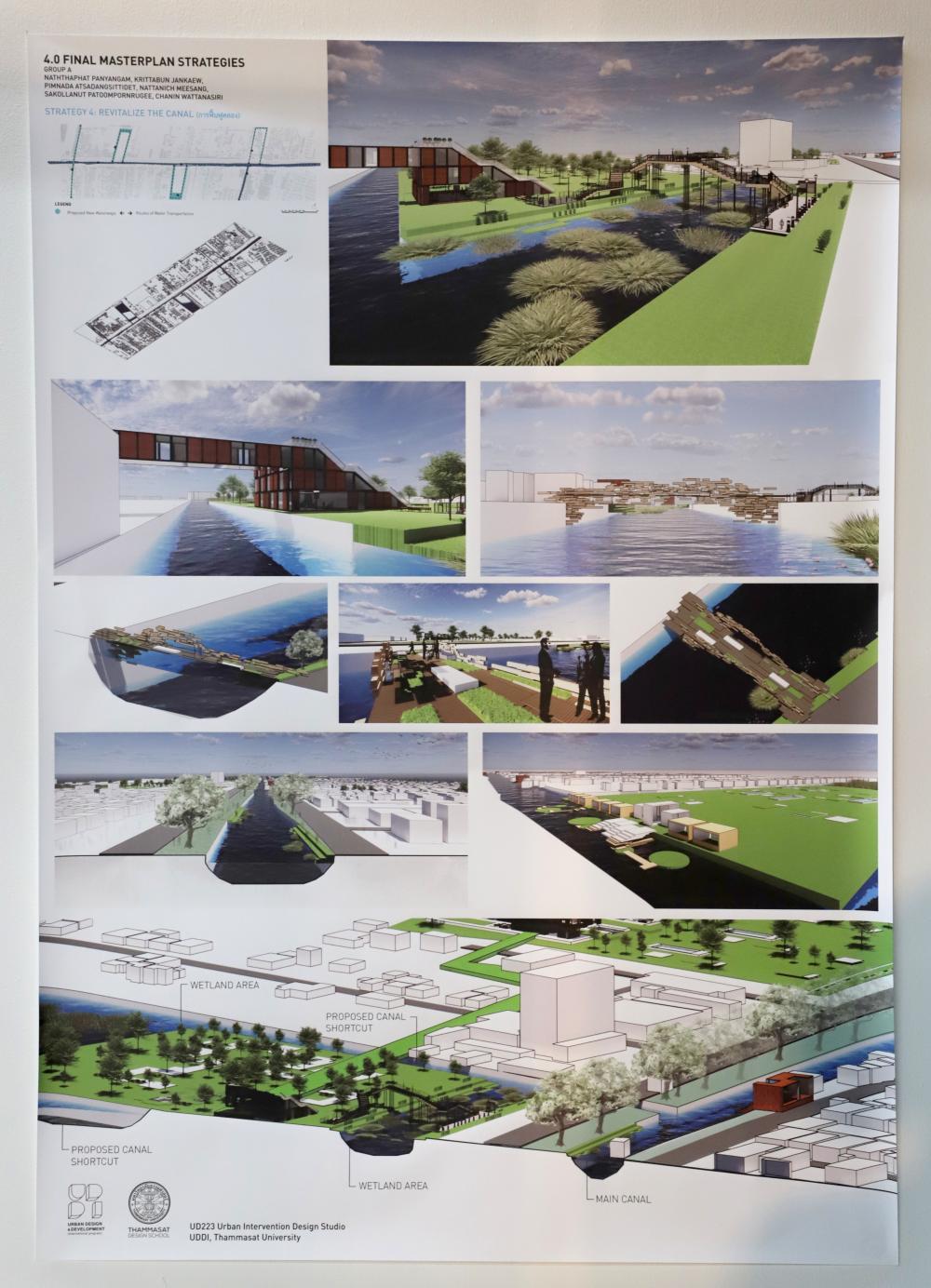 Students from the UD223 Urban Intervention Studio course were divided into two groups. One of Group A's designs focused on revitalising a canal.

UD223 Urban Intervention Studio, facilitated by Lo, divided 11 students into two groups -- A and B. Both groups analysed Thanyaburi district through PESTEL (physical, economic, social, temporal and historical, environmental and legal analysis) and SWOT (strengths, weakness, opportunities and threats). After the analysis, students came up with design solutions that included sustainable development goals (SDGs). Each student had the opportunity to take part in either group or individual design. Due to the Covid-19 pandemic, students mostly collected data and information about Thanyaburi district via the internet.

Nattanich Meesang, a representative of group A, said they were in charge of the area between Klong Nueng and Klong Song. After analysis, they discovered that the community is not connected to mass transit or roads, and is far from green areas. Just bus stations and motorbikes are not enough. Moreover, the canal area lacks activity. Communities are at risk of serious flooding and sois are at-risk areas for crime. So, the group decided to build several landmarks in undeveloped open spaces.

"There is only one mall in the area -- Future Park. So, we designed more landmarks to attract people and encourage activities, including a recreational building, a mixed-use building and a start-up building. These buildings will increase the number of people in the area which can solve the problem of it being a high-risk location. Also, public transportation will soon be more readily available. To prevent flooding, we created green parks next to canals and green spaces on wetlands. In the wetlands, we plan to grow plants that can help absorb excess water and reduce flooding. Pedestrian connectivity and public green spaces will also be developed," said Nattanich.

Meanwhile, group B analysed the areas of Klong Sam and Klong See. A representative of the group, Karin Kalinta, said the area has many factories. There is not enough public transportation and only one main street, so many people travel using their own vehicle which causes heavy traffic. The area is also at risk of flooding, lacks public green space, and pedestrian safety and connectivity. 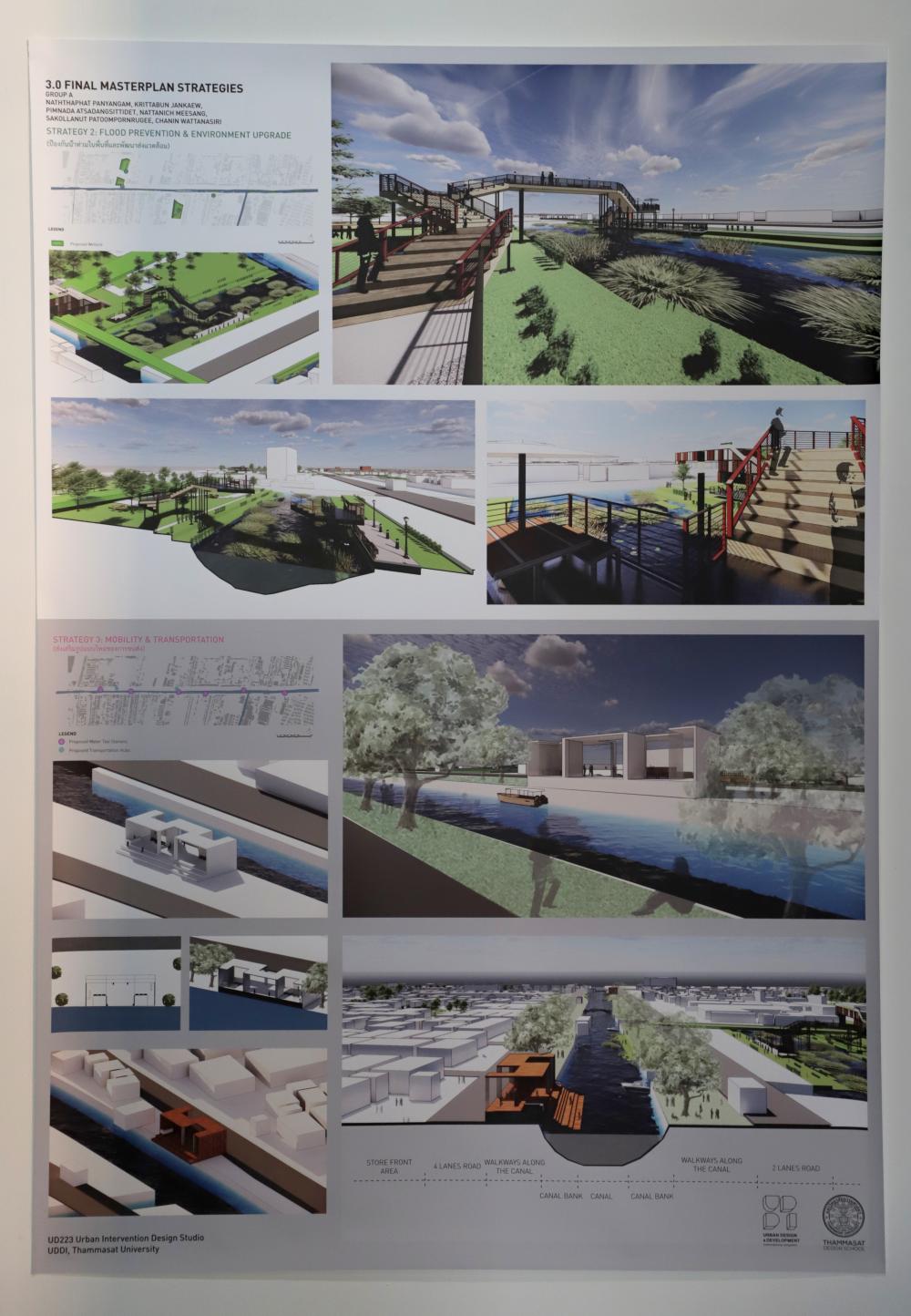 "We rejuvenated the water by designing a floating garden and pavilion, so people can stay cool in the hot weather. We adapted ideas from case studies in the Netherlands, which is famous for its flood management infrastructure. We also grew local plants in the wetlands to absorb floodwater and improve the quality of wastewater. Also, we designed increased access to public transportation and walkability by connecting roads and sidewalks. Instead of using their own vehicles, citizens are able to take public transportation or walk on green footpaths along the klong," explained Karin.

Since the name Susthan comes from the words sustainability and Thanyaburi, the group aims to promote Thanyaburi as a food reliant district and hopes it is recognised for its famous food. The group designed a "Farm Park" centre which has facilities and services to support the agriculture community, such as a public library, brand consultation, and civic engagement. There will be other activities such as creative food competitions, local fruit and vegetable markets and Asean food festivals since there are many migrant workers in the area.

"Food Park was inspired by Singapore, which has food technology venues to study agricultural technology. We hope to see many people, including science and technology professionals, farmers, marketing and graphic designers and officials from the Faculty of Agricultural Innovation participate in the project. Thanyaburi used to be famous for 'Rangsit orange' and is currently a rice-growing area. If we support Thanyaburi's agriculture, it can become a sustainable food city," said the representative of Susthan, Manewaan Amornwattanapong. 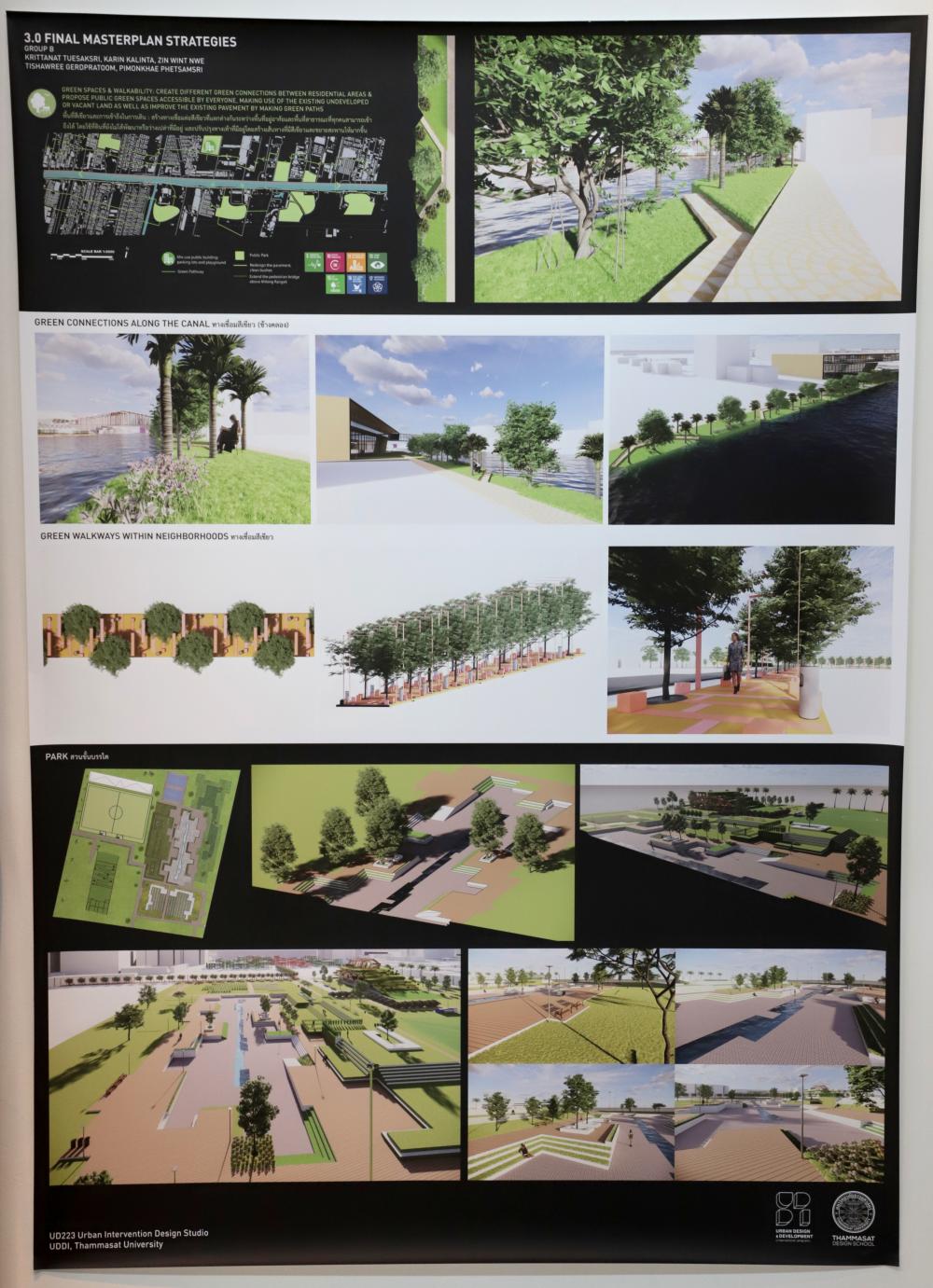 As the representative of the Guay Tiew Ruea group, Pitchasenee Sarayodhin said Thanyaburi is famous for boat noodles, so the group created a boat noodle festival.

Both Susthan and Guay Tiew Ruea also created gaming simulations to help the public understand their roles and the projects. While Susthan's card game is a battle between a local restaurant and a global food chain, Guay Tiew Ruea launched a monopoly game in which players can learn more about the ingredients of boat noodles.

"Our game is a battle between people with power and people with less power. Thus, we added some situations to the cards. For example, one situation is that gasoline prices increase. In this scenario, a local restaurant has an advantage if it purchases products from local farmers. We would like players to understand the importance of each role in the community through the game," Manewaan said.

Most students believe that their projects were possible to become reality. As course coordinators, Puggioni and Lo agreed that the project is a start. 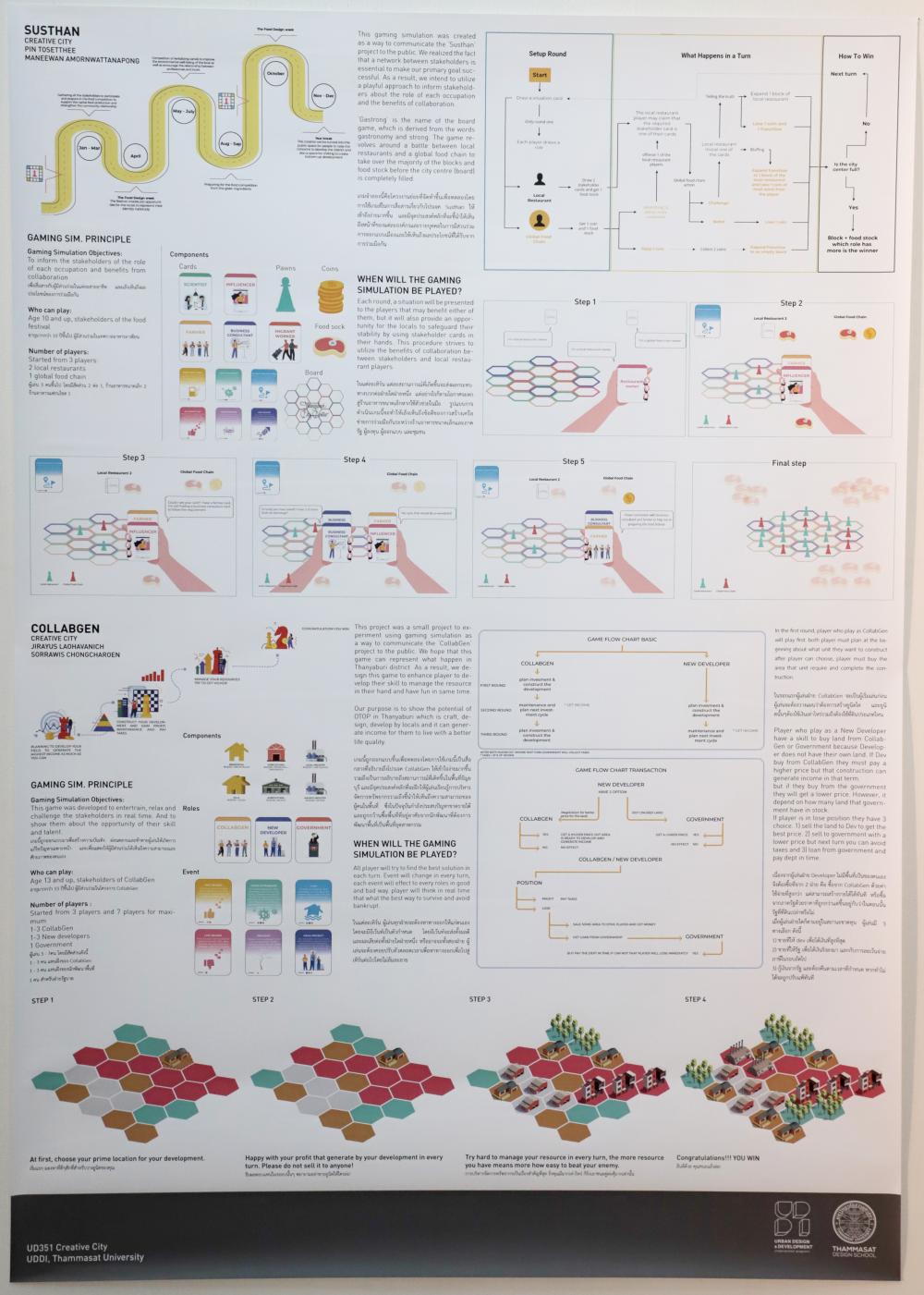 "The projects are a starting point to introduce the possibility of what things could be like and to try to capture the interest of local authorities. The projects are not entirely fictitious because they are based on real-world scenarios and real people, but to become a real project, they need to bring people on board and actually show them how the community will benefit from these projects," concluded Lo. 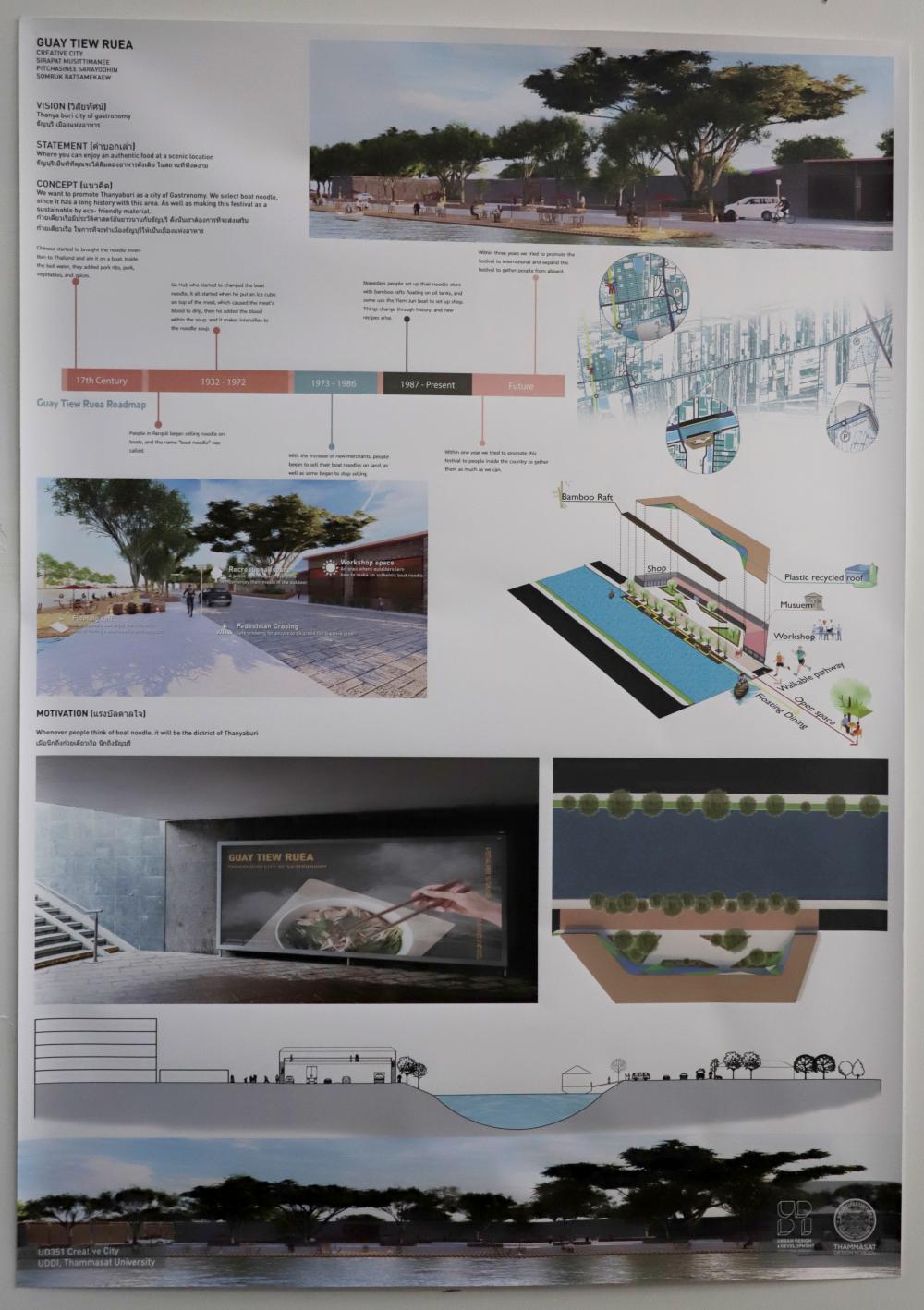 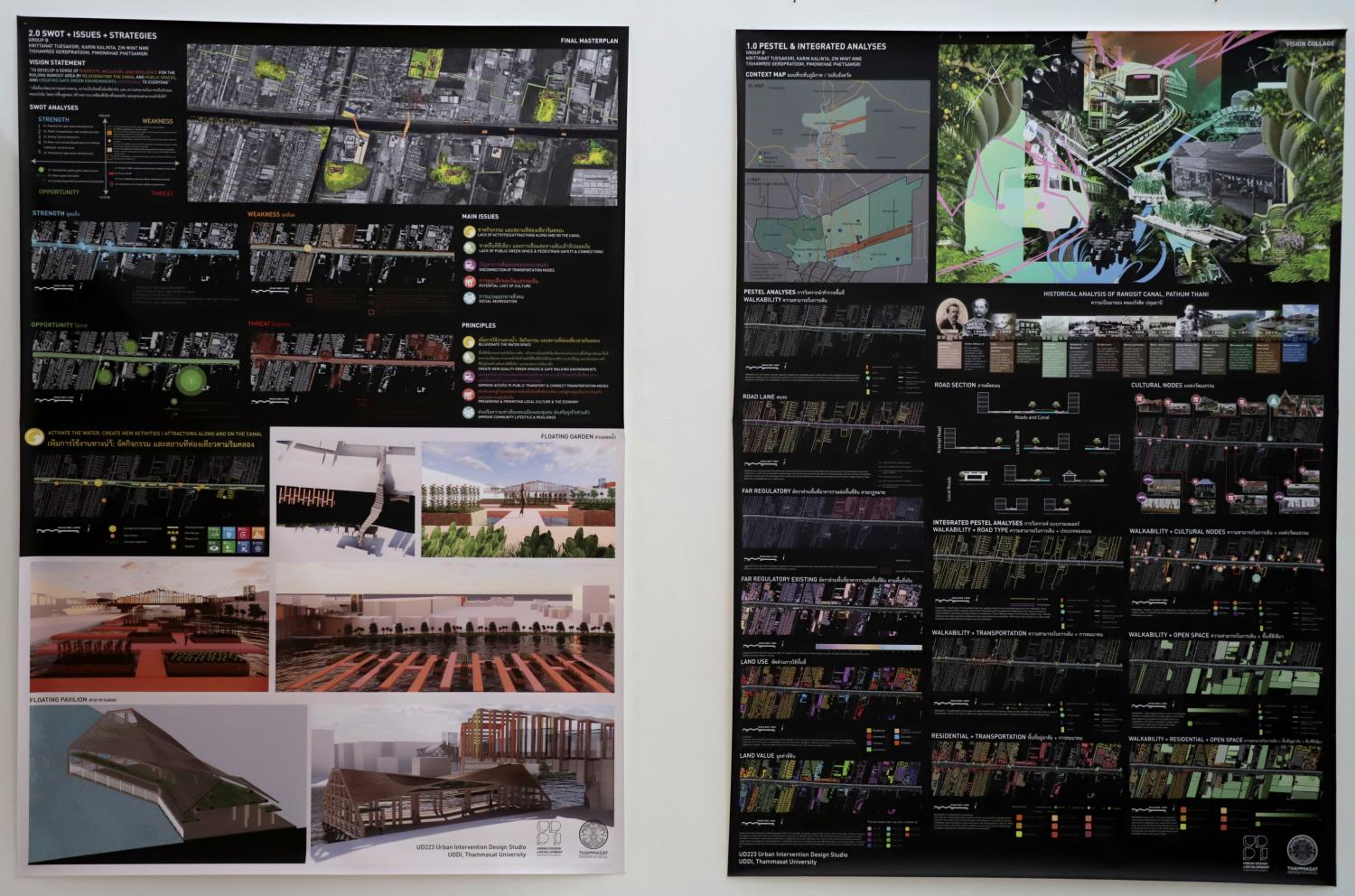 Students from the UD223 Urban Intervention Studio course were divided into two groups. One of Group B's designs focused on SWOT analysis, and a floating garden and floating pavilion. 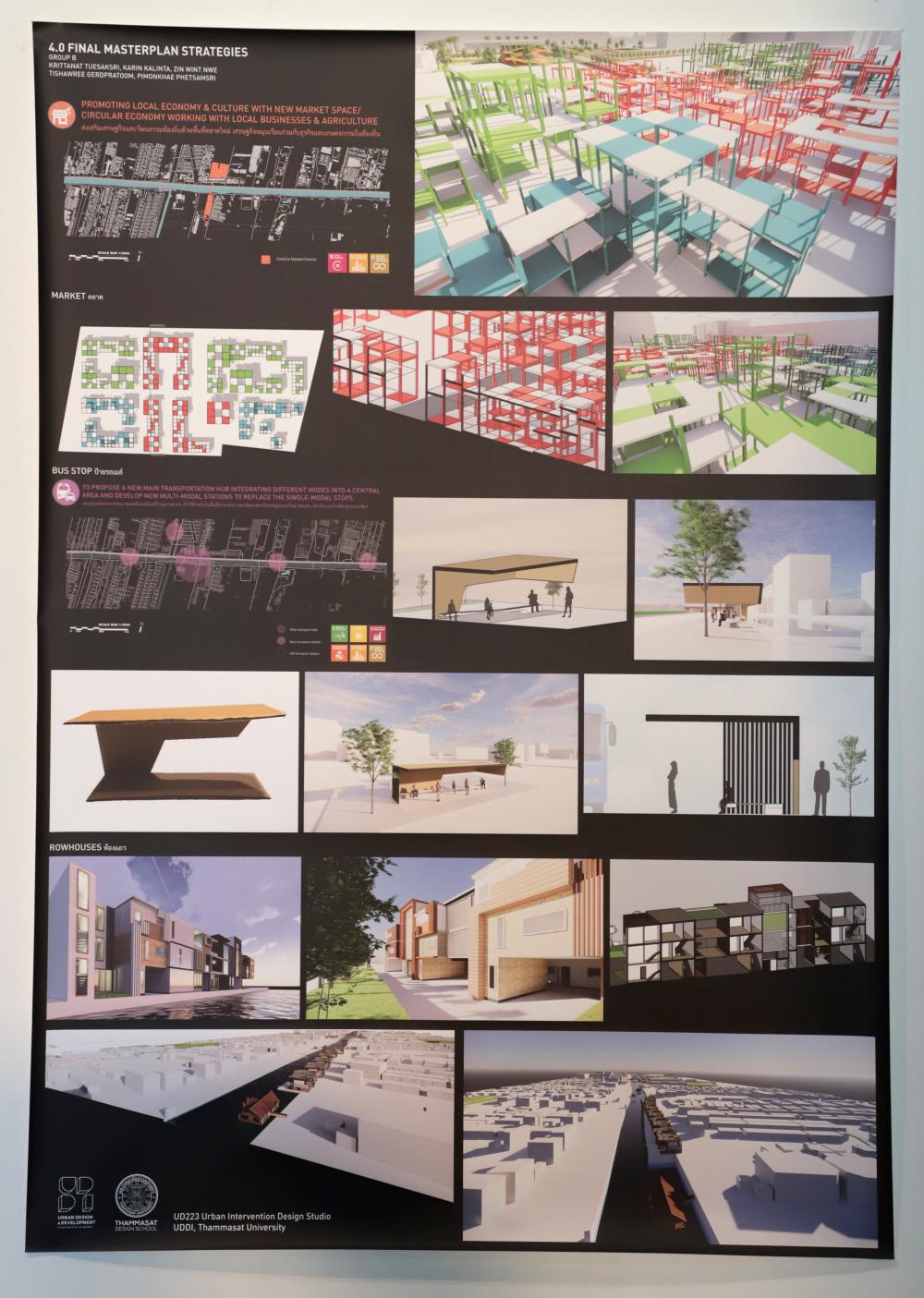 Other designs from UDDI students at Thammasat University.