At the fifth edition of S.E.A. Focus, artists turned to their roots to imagine a changed future

A few days after the dawn of the new year, I found myself on the move earlier than usual. It is not usually until the second week we hit the ground running. After all, who would fly to Singapore just for an art exhibition? But I took it on because, given the pandemic, its theme seemed timely and powerful. Despite a brief downpour, it was a rewarding experience. Made of earthy materials, some pieces evoked a refreshing sense of self-renewal. 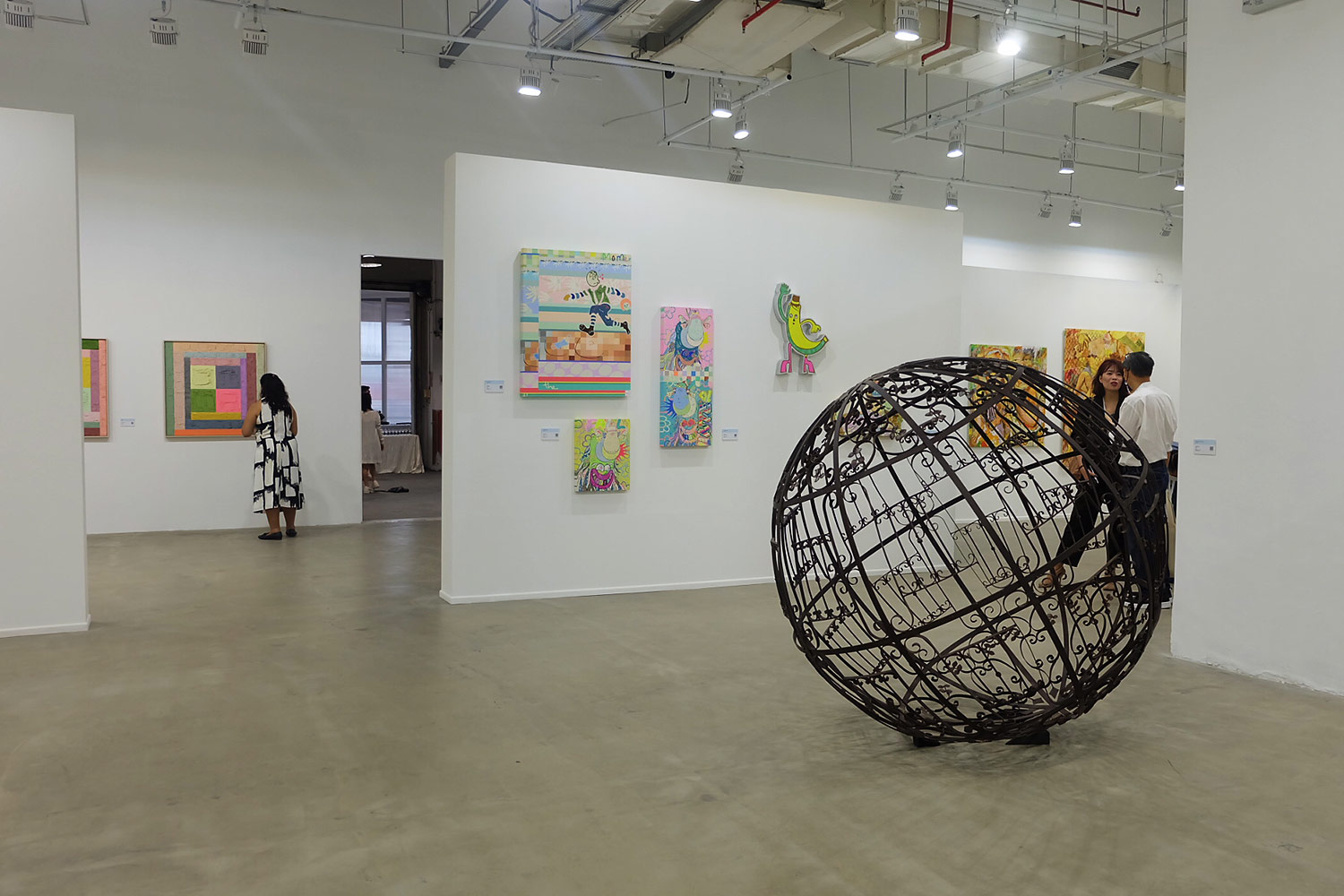 At the fifth edition of S.E.A. Focus, a showcase and hub of contemporary works from Southeast Asia, established and emerging artists brought us back to the core. Held under the theme of "A World, Anew", the anchor event of Singapore Art Week commissioned by the National Arts Council, was not a leap into the unknown but a return to the beginning of time. Starting anew is not always from ground zero because contemporary artists can turn to their roots for inspiration.

"There is an idea that actually we are not a blank slate. There is a lot of history from which our future can go forward," said Joyce Toh, curator for this year's edition, in a press preview.

Acknowledging the past was signalled by the choice of its venue. S.E.A. Focus ran in parallel with Singapore Biennale at Tanjong Pagar Distripark, a historic port near heritage neighbourhoods that double up as an arts cluster. Upon entry, I was struck by shipping containers, cranes and a flurry of activity in the background, but soon comforted by a tranquil space at a warehouse building, home to paintings, sculptures and installations. It defied the usual format of art fairs in favour of open, functional space. 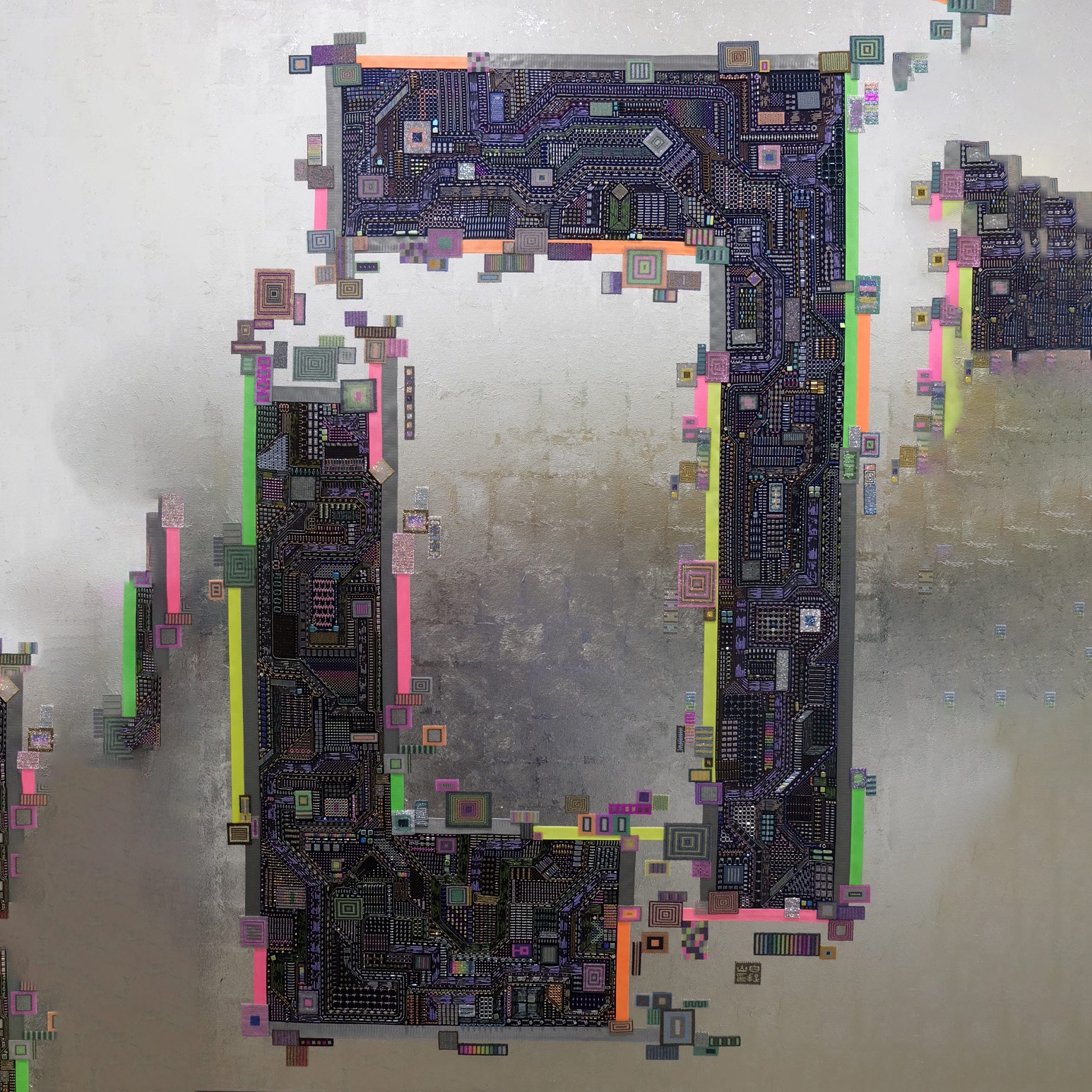 At the entrance, I came across what appeared to be a digital simulation of rough terrain, but upon closer inspection, it was made of abaca string sewn on aida cloth. Celine Lee, an artist currently based in the Philippines, created Artificial Land from cross-stitching abaca, or Manila hemp. It is a strong fibre from the leafstalk of a native banana which represents her home country. She made an image from an area in Bicol, where abaca thread was probably obtained, and created it via 3D software.

Nearby, a collection of paintings by Jumaadi, an Indonesian artist, engaged with local customs. Made of buffalo hide, they are created in the style of wayang kulit (shadow puppetry), a vanishing ancient art form that originated on the island of Java. Filled with trees and human figures, his works explore the cycle of life and death. For example, Native Flora depicts a tree borne out of human-shaped seeds. In the same vein, Boat And Mangroves portrayed a mountain of trees growing out of two skeletons, supposedly symbolic of him and his wife, implying that our dead body can give birth to other life forms. 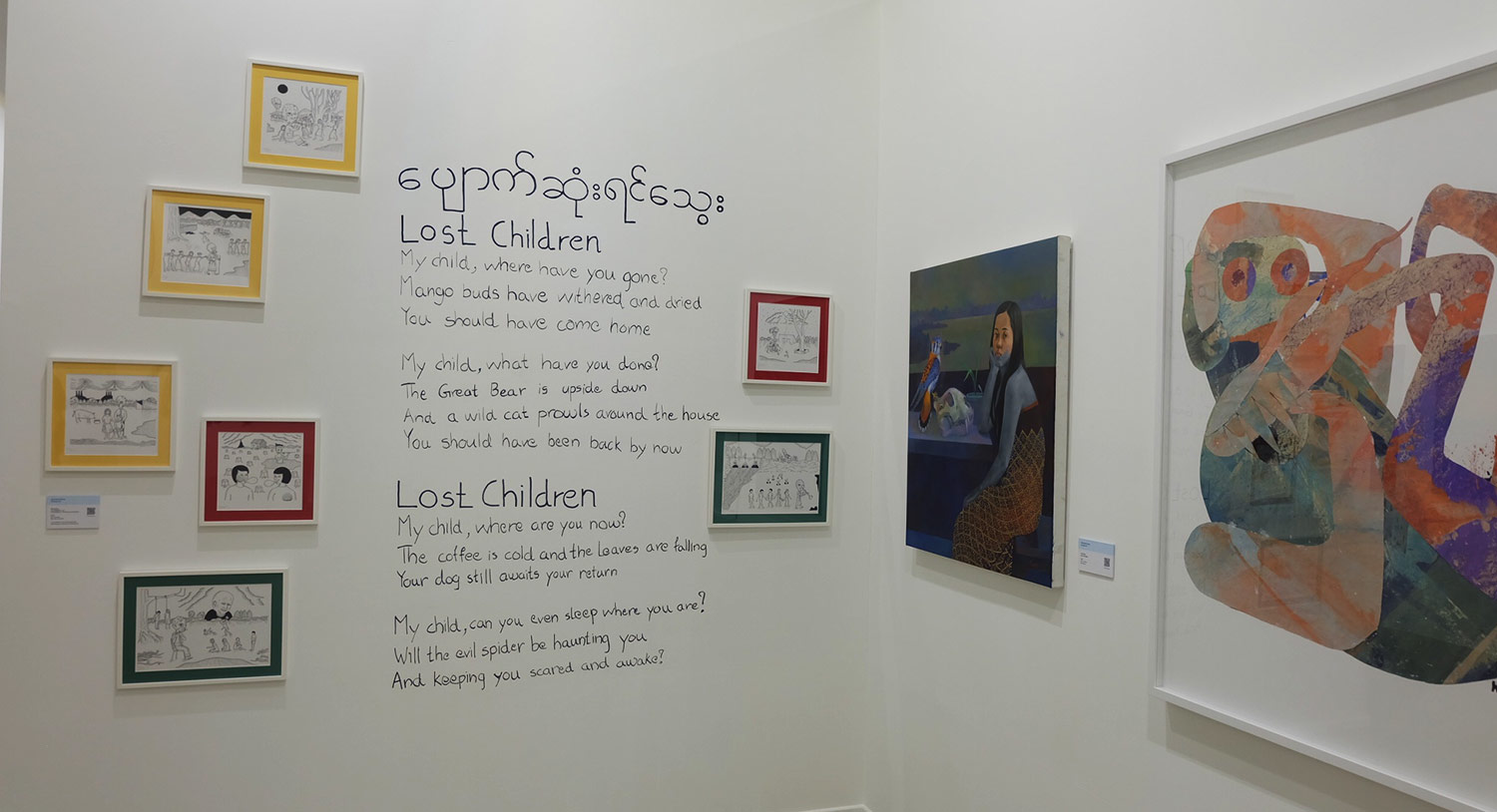 Reimagining nature can be escapist fantasy or mourning for irreversible loss. Paintings by Cheong Kiet Cheng, a Malaysian artist, showed her attachment to the natural world. Growing up in a small town, she saw nature disappear due to development projects. Her surreal works include many creatures. In Reunion. Come Together, she depicts a dragon and hybrid figures in the cosmos. Seed is a painting of a tree trunk where the top is surrounded by celestial bodies, like a home of gods. Upon closer look, vines and leaves uncannily show human and animal faces, which bear a resemblance to Nariphon in the Himmapan forest according to Buddhist mythology.

Aliansyah Caniago, an Indonesian artist, conjured camphor leaves to trace his heritage. Barus Expedition #1: Kew Garden Specimens is a reconstruction of camphor (kapur barus in Malay) that has vanished due to colonial exploitation. Barus, a port town, is named after the plant that was once a popular commodity. After finding specimens at Kew Gardens in London, Caniago painted them in different shapes like a botanist. By adopting Carl Linnaeus's classification system for plants, he used the same method that underwrote Imperialism to undo its damage.

Some artists showed that artistic creation could come from something tiny or discarded. Bettina Schleier, an Austrian artist currently based in Singapore, created Wavelength Outer Space out of small components like glass beads, embroidery supplies and fluorescent acrylic. She arranged them with such meticulous attention that they look like electronic circuits. In the same way, Expanding Universe forms a rectangular shape, but its permeable angles give an impression that the cosmos is a work in progress. Inspired by the grey, rainy sky, her work found an echo in Desiderata, a poem by Max Ehrmann. A stanza reads: 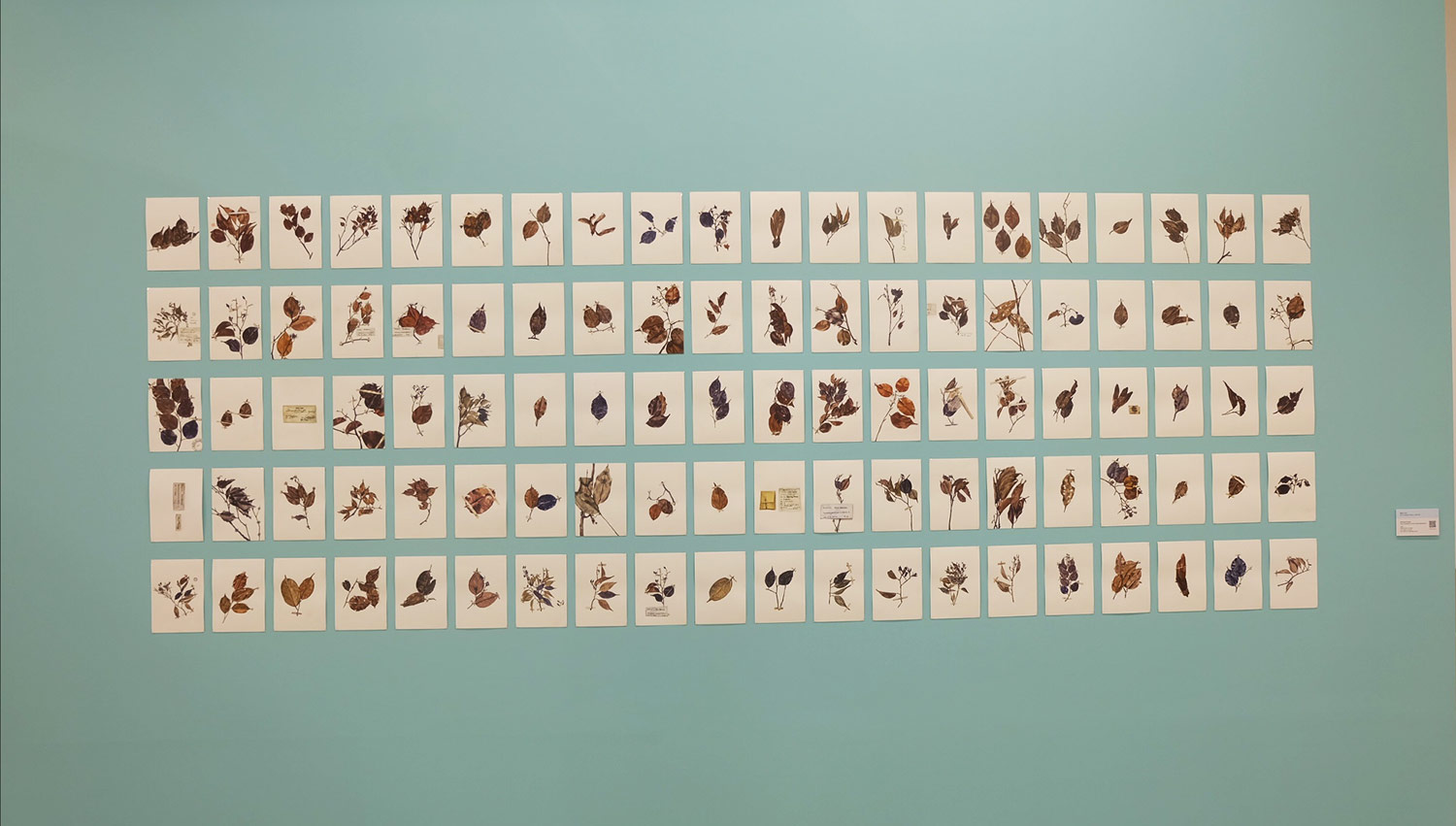 "You are a child of the universe, no less than the trees and the stars; you have a right to be here. And whether or not it is clear to you, no doubt the universe is unfolding as it should."

Ari Bayuaji, an Indonesian artist currently based in Canada, redefined the socially constructed idea of value. Dream Catcher is a large tapestry made of plastic waste and cotton thread. He collected rope that strangled trees on a beach in Bali, turned them into filaments, and had weavers create a single piece of fabric. It was a collaboration between the artist and community residents who bore the heavy brunt of Covid-19. In this project, they reclaimed artistic value to disposable items.

A handful of works marked a bold departure. Maung Day, an artist and development worker, composed a poem titled Lost Children. It was handwritten on a white partition by Victor Paul and Braung Tun next to a series of surreal drawings. 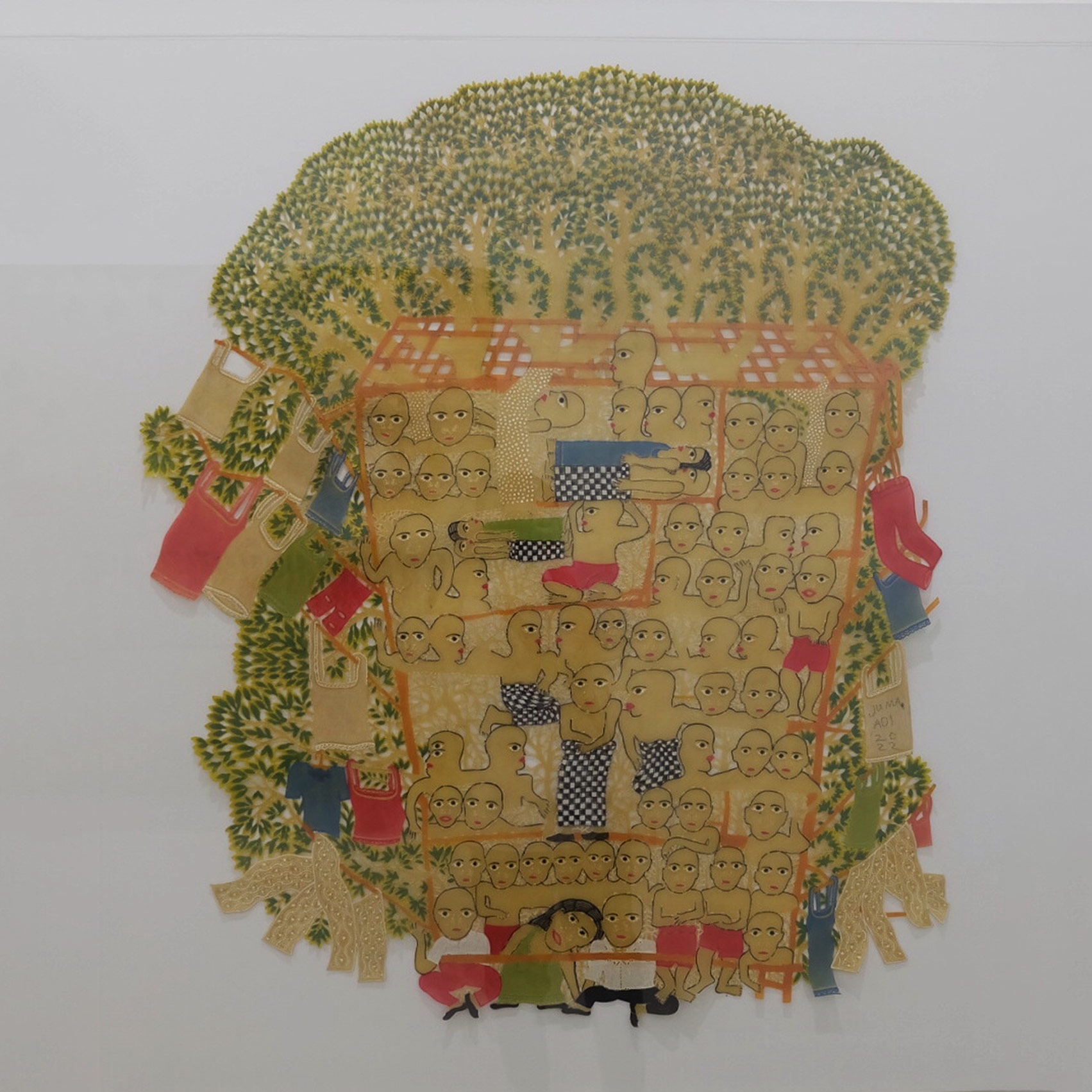 Set in rural villages under threat of deforestation or industrial pollution, they show the macabre like blood and bones. One of them depicts extrajudicial killing in the background. When read together, the political artwork recounts generations of lost children who were severed from their families and homes.

Thai artists also contributed paintings to the showcase. Oils by Supawich Weesapen, a young artist, deal with natural phenomena. In the style of photography, Square Reverie, for example, captures the reflection of green light on water. Meanwhile, Rirkrit Tiravanija invited viewers to interact with his crafted dinnerware. After a private dinner, dirty dishes were put on display and taken home.

To me, the fifth edition of S.E.A. Focus offered solid ground in a teetering world. In light of Covid-19 and the hard slog of lockdowns, things gravitated to the digital sphere where physical contact and the purpose of life were sadly lost. After three years of the pandemic, we are on the road to discovery, but I think the world we are in is already altered. Whether or not there is light at the end of the tunnel, art can help us trace and discover our footing again.