Pretty is as pretty does
Life
Arts & Entertainment

Pretty is as pretty does

In response to Christopher Marlowe's line in Doctor Faustus, "Was this the face that launch'd a thousand ships", performer Sasapin Siriwanij is saying "no".

In her new performance I Didn't Launch A Thousand Ships at B-Floor Room, Sasapin is no Helen of Troy, but instead a plain-looking woman. Through this physical-based performance, she speaks of the struggles one has to go through in a society in which, oftentimes, only good looks are admired and idealised. 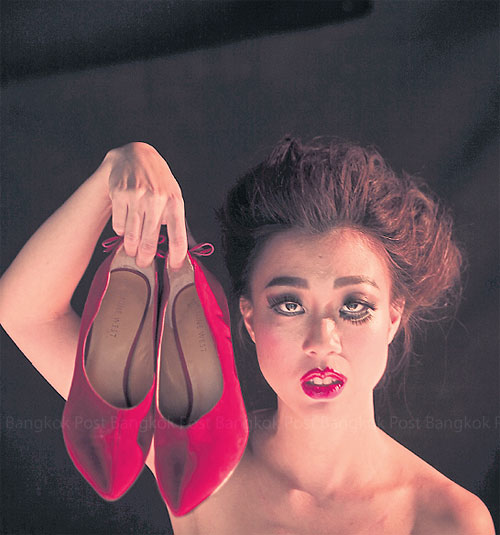 Poster for I Didn't Launch A Thousand Ships.

The show is another in a string of solo performances by Sasapin in quite a short period of time. Last year, her show Womanities featured in the eighth International Butoh Festival in Bangkok. In July, Welcome To OoooLand hilariously satirised the idea of Thainess.

Sasapin studied English at Chulalongkorn University's Faculty of Arts and began acting with the Department of Dramatic Arts. Since then she has been involved in many theatre productions with various theatre groups such as Makhampom, Crescent Moon Theatre and Dreambox. She has also acted in commercials, short films and feature films. Sasapin is probably best-known for her role as Makhin, a Burmese maid, in GTH's ghost movie Laddaland.

She began shaping her current performing style in a workshop with B-Floor Theatre, a troupe known for avant-garde physical shows of which she later became a member.

In an interview with Life, Sasapin talks about the concept of her work and how physical movement can help deliver her message.

Why didn't you launch a thousand ships? If you're not Helen, who are you?

I'm just an ordinary woman. I'm not ugly. But I'm not that beautiful either. And there are prices to pay for not being that beautiful in this society.

What is this performance about?

Physical plainness. And how an individual and society deal with that. Is someone really not pretty or are you structured to think so? To what extent do we have to feel ashamed of our plain looks? On both an individual and social level, there are struggles to fight against this, and many times it's painful and unnatural.

How did you come up with the idea for this performance?

As I'm nearing 30 years old, I've become conscious of the little changes happening to me. I'm not too worried about it, and I'm sure it's the same with many women, but we do worry. But sometimes you get tired trying to catch up with it all and you just want to say: "To hell with it, I'm not pretty, OK? I didn't launch a thousand ships like Helen of Troy, so just don't ask so much of me." But also the irony is there. Just right when you admit you're not pretty, you realise you've brought all the pressure onto yourself. Prettiness seems to be a big deal in this society. The ugly truth is that if you are good looking, you do tend to get away with things. Or we can substitute "pretty" with "good", "virtuous" and all that. Thailand seems to not be able to live with things that aren't pretty. We want to be able to say all is good, peaceful and beautiful. And that's the only definition of Thailand. Being messed up doesn't mean Thailand. Conflicts can't mean Thailand. Evil can't mean Thailand.

Will there be dialogue in the show as well?

I will be reading some text, but other than that it will be just movements. Dialogue has its strengths — it is clear and it works with people's minds effectively because in our daily life our minds work with written and spoken languages all the time. The body, on the other hand, can bring you out of the everyday world to places you don't know you'll go to — inside your head, your past, your dreams, your fears. Or sometimes purely physical sensations. While dialogue tends to conclude, the body doesn't. I like the space the physical performances leave between the show and the audience. That's where you can be with yourself and breathe and decide what it means to you.

You came up with the performance and rehearsed alone. What was that like? What's the challenge in that?

The biggest challenge is to stay motivated. And you've only got yourself to do that. How do I come to rehearsal every day and make sure I'll be productive instead of leaving the studio for coffee or shopping. Another challenge is how to juggle all the roles and stay sane and effective. Now I'm the director, performer, half-designer, half-producer and half-PR. It feels like I work 24/7 on the show even though I'm not in my rehearsal outfit.