Thailand in a room

Ornanong Thaisriwong refuses to be cowed, even as junta henchmen record each of her one-woman shows 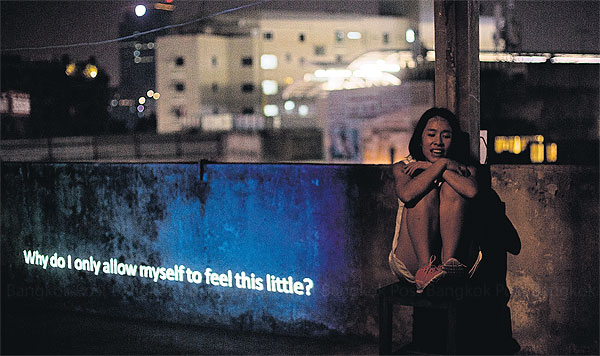 Bang-La-Merd: The Land I Do Not Own, a solo performance by B-Floor Theatre's Ornanong Thaisriwong, returned after three years to the new theatre venue, Thong Lor Art Space. Well, to call the revival a solo performance is inaccurate and ungrateful to the military officers — Bang-La-Merd's self-appointed landlords — who have been stationing in a corner every evening of the performance with their video camera and tripod and virtuoso smartphone-twiddling — the very first in Thai theatre!

Their presence and the military's demand for written permission to stage a show have brilliantly blurred the line between art and life. After all, Bang-La-Merd is being staged in the shadow of the current heated debate about regime's new digital economy bills that have been criticised as a violation of freedom of expression, among other things.

So finally Bang-La-Merd can truly live up to its name (literally, "area of violation"). And we can be rest assured that all that must not be spoken will not be spoken.

Ornanong & Co have proved their courage: they did not buckle under intimidation disguised as routine law enforcement. Thong Lor Art Space, too, could have easily pulled the show, but they've stuck by their artists.

In the 2012 version of Bang-La-Merd, Ornanong admitted to the audience in the first scene that she had decided to censor herself, hinting at what she had wanted to do but legally couldn't do and detailing her thought process towards the decision of self-censorship.

Before the press preview on Jan 20, Thong Lor Art Space received a phone call from the military regarding the show. B-Floor Theatre later spoke to a military officer on the phone, during which they were reminded of the state of emergency and told to submit a letter requesting permission to stage their performance, though there is no such law requiring a theatre company to do so.

At the press preview, the entire exchange with the officer was reenacted in the first scene of the show with endearing humour by Ornanong. The laughter from the audience was loud and hearty, but there were also worried faces and tense smiles. When the show premiered two days later and the military sent their men to record the performance for the first time, Ornanong's audacity only seemed to grow with their presence. Or was it a way of dealing with fear? She did not change the content of the first scene.

She treated and interacted with the officers like other audience members, not like authority figures whom she owed obsequiousness.

She teased them the way she teased the rest of the audience. When she went around the room, labelling people and objects with red dots, she didn't skip them. It was as if she was testing the limits of satire, though it never felt like provocation.

The long-abandoned floor of the shophouse, home of Thong Lor Art Space, looks and feels like a hidden place — a space for underground culture and activities — despite it being on the top floor. Someone had spray-painted words on one of the unpainted walls. There are glassless windows and splattered cement. There is no air conditioning, not even a single fan.

But it is also a space of danger, a place where your sense of paranoia is heightened. Hundreds of razor blades hang from the ceiling as if to say, "Don't stand up too tall",  or "Don't even tiptoe around anything because even that is too sensitive". On one wall, there is a real-time video projection of Ornanong preparing for her performance in another room, seemingly unaware of being watched.

Like in the original staging, Ornanong still tests our sense of privacy and invades our private space. In one scene, she moves around the dark room, lit only by a spot of flashlight that dictates where she goes. I remember that in the previous version, Ornanong's movements felt mechanical, as if her body was being cut up like censored information. The way she moved around the room felt invasive, challenging the audience to move, to stand up for their personal space.

In this new staging, her movements remain repetitive and controlled but also fuelled by desperation. The way she follows the flashlight around the room, out onto the balcony and finally onto the rooftop evokes a desire to be heard and seen. She challenges us this time not to protect our private space, but to make room for her, to follow her and be with her wherever she goes. As we stand on the balcony, looking up at her dance on the edge of the rooftop and exposed to the city lights, we see a vulnerable human being.

But Ornanong not only searches for refuge, she also provides it. The heartbreaking final scene depicts a voice from within a jail cell — that of a young artist socially alienated and forced to be forgotten. The cruellest thing is that her voice is not safe in the Thai media, the majority of whom do not give her story a space, let alone acknowledge the injustice. Yet it has found its home in the art and body of Ornanong. But the space we once thought as safe and free and belonging to us is no longer so.

Never has going to the theatre felt more like an act of solidarity, of showing empathy, of exercising compassion. But fear is more pervasive than ever, and it has forced so many of us into silence. Bang-La-Merd shows us what it feels like to break that silence under blatant surveillance, to be in the same room as the source of fear.

I recommend this show especially to those working in the creative fields. If you still think what is happening every night at Bang-La-Merd happens only in North Korea, China or Russia, go see the show and talk to the artist. And get a reality check.