Fado music is just one of the genres available in the cultural melting pot of Goa, India

On a business trip to India last week, I had the great fortune to catch several inspirational sets of Portuguese Fado music at the Cidade de Goa resort on the beach in North Goa. It was good to be back in India, and a delight to be in the fascinating cultural melting pot of Goa, although at this time of year it is hot and humid, even perhaps hotter than Bangkok, or at least it felt that way. But India's smallest state is lush and green with some impressive trees, and a strong breeze brought relief from the pre-monsoon heat.

While I was at the resort I noticed that there was a dinner show, "Noite de Fado", at the Goan/Portuguese restaurant Alfama that very evening at eight. I quickly booked a table for myself and two colleagues and went there to meet the musicians scheduled to play that evening: the band, featuring Franz Schubert Cotta on Portuguese guitar (guitarra Portuguesa) and Carlos Manuel Meneses on guitar; and singers (known as Fadistas in Portuguese) Sonia Shirsat, Chantalle Marie Cotta Viegas and Nadia Rebelo. Native Goan musician Franz Schubert Cotta (he got his unusual name from his music-loving parents after being born on the 150th anniversary of the great classical composer's birthday) explained that the restaurant was named after one of Lisbon's three Fado districts, Alfama. Designed like a mini-Latin square with alcoves and a balcony, the restaurant has really good acoustics so that the Fado band's performance was unplugged and acoustic. The concept, said Cotta, was to create the atmosphere of a Fado night with fine dining.

A nice touch was the house rule of not serving food or drinks while the musicians played.

Goa has an eclectic culture, expressed in the local language Konkani. There are many kinds of folk music in the state and reports I've read say that as many as 35 different kinds of traditional music are still performed in villages and at festivals, including duvalo, dhalo, banvarh, deknni, ovi, zagor and zoti. The 400 years of Portuguese rule, which ended with independence in 1961, has also left its mark not only on the architecture and cuisine of Goa but also on the music. Cotta said that mando, a song style based on themes of love and sung by male and female singers, was a "uniquely Goan musical style" and a good example of the way Goans have assimilated both East and West to create something new. 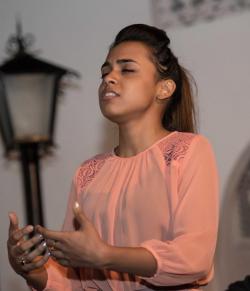 One kind of music often mentioned to me as a Goan invention is trance music, which is said to have come out of the "Hippy" years of the 1960s and 1970s.

Cotta's family business is music. His sister performs with the current band, which he said has been playing for more than 10 years, and both his parents are music teachers. He said that for the evening's show they would play only Lisbon-style Fado. His father sings the other main Fado style from Coimbre (sung as a serenade by male singers) but had been indisposed and so was unavailable. He noted that it was hard to find young students in Goa with the discipline required to be a Fado musician, especially for the Portuguese guitar, but young singers such as the 17-year-old Nadia Rebelo were coming through, so the tradition remains alive and kicking.

Chantalle Marie Cotta Viegas began proceedings with a set of powerful songs that set the tone for the evening. Each set, and there were five in total, featured one or two of the singers. Viegas and Shirsat, as the senior performers, were so powerful and emotive in their singing, producing goosebumps on the arms of my colleagues. Spine-tingling vocals, the haunting melancholic sound of the Portuguese guitar and the rhythmic pulse of the guitar held us all spellbound. The newcomer Nadia Rebelo acquitted herself well and while not having the range and emotional intensity of her seniors was nonetheless a fine young talent.

I particularly liked the spoken introductions in English by Shirsat before each of her songs. She told us of the woman who died of a broken heart and of the themes of love and heartbreak; she noted the themes of homesickness and ships lost at sea (the sea being a powerful metaphor in Fado and seafaring people). And then she lived out the emotions of the songs with her powerful voice and stage presence.

You could sense the feeling of saudade, that quintessential mood of homesickness that is found in all Portuguese-influenced music, permeate the restaurant. She performed one of my favourite Fado songs, Maria Lisboa, and ended the night with a rousing cover of an Amalia Rodrigues' song.

It was a delightful evening of music, accompanied by some fine dining and one or two glasses of excellent wine, and as we headed off into the balmy Goan night, the haunting sound of Fado followed us.