Our monthly round-up of LGBTI news

THE SPIRIT OF PRIDE

When US President Donald Trump decided to end Barack Obama's tradition of Pride Month celebrations at the White House, the LGBTI community in Thailand thought that the Pride reception, held at the US ambassador's residence for the past four years, would be cancelled, too.

However, everyone was delighted -- and taken by surprise -- when they received a rainbow-coloured invitation for the reception, which was held last Tuesday at the ambassador's residence on Wireless Road. Diplomats, government officials, human rights activists and guests waded through the rain and traffic for the gathering hosted by Ambassador Glyn T. Davies.

The 5th annual Bangkok Pride reception was more of a quiet, sombre affair -- out of respect for the late King Bhumibol -- compared to the party and drag show, cake and fancy photo booth that usually takes place.

This month also marked the one-year anniversary of the shooting at Pulse nightclub in Orlando, Florida, in which 49 members of the LGBTI community and friends lost their lives.

In his welcoming speech, Ambassador Davis called the evening "a celebration of an idea", and that everyone "deserves to be valued and loved for who they are".

"Speaking for my country, the United States of America, we stand with the human rights defenders in solidarity with them and with you, civil society organisations, who are working to uphold the fundamental rights of LGBTI persons to live in dignity and in freedom."

He continued to say that anyone who cares about the world's future should look into gender discrimination as it's not just a problem that affects a single group of people, but rather "the future of all of us and our children".

"Because when people are discriminated against, when there is violence, it undermines stability -- which undermines prosperity. It prevents progress from happening," he added.

The ambassador further stated that people in his country do believe LGBTI rights are universal. While staying positive is good, we can only hope his government will share and uphold the same ideology, too.

How difficult is it to look for clothes, shoes, bags and other apparel to suit your body type? For some members of the LGBTI community it's a tedious task, especially for the transgender and cross-dressers to find garments that are form-fitting and appealing to their taste.

Aiming to solve this problem is Lagobe, an e-commerce website that hopes to break into the market -- though slightly uncharted.

Ratthasapa Vatthanaautsahapong, CEO of Lagobe, said LGBTI people are a diligent crowd with less burdens ("they have no kids"), which makes them buyers with strong potential and the ability to splurge on a lifestyle that caters to their whims and fancy.

The CEO acknowledged some of the problems LGBTI people face in finding the right clothes. For example, he said tomboys would have trouble getting masculine clothes to suit their smaller frames. Men's clothes are generally too big, and so a few resort to buying boy's clothes, which may come at a right size for thin figures, but are neither form-fitting nor flattering. Some buy men's clothes and get them altered.

Hoping to solve these issues, Ratthasapa said the website has brought together more than 40 brands to cater to customer's needs.

At a press conference held earlier this month, the executive gave us a glimpse of his brainchild.

"The website is separated into sections for men and sao lhor [handsome girl, a term some use to refer to tomboys]," Ratthasapa said, as he introduced the dark blue website that seems to focus largely on the masculine side of the LGBTI spectrum with little regard to other groups.

The word "LGBT" was mentioned a lot at the press conference, with the site claiming to be the "No.1 fashion marketplace for LGBT in Asia". Some may question whether the company possesses a true understanding of the acronym "LGBT" and realises that there is far more to it than just gay men and butch lesbians.

It was also unfortunate that the website and executives neither mentioned nor acknowledged the transgender population despite the CEO's claims of extensive research into the matter. Why does it cater to only tomboys but not transgender men? And where is the section for transgender women, who may be looking for feminine clothes to suit their larger frames or even high heels that come in a bigger size?

Lagobe's attempt at breaking into the LGBTI market can be considered a good, well-intended beginning, but also empty and elusive for the time being. The company will need to take further, more thought-out steps if it hopes to establish itself for this specific market, especially to increase its chances at tapping into the wider market of these buyers.

Lagobe.com will see its official launch on July 7 at 7.17am.

Email melalinm@bangkokpost.co.th with news and views on LGBTI issues. 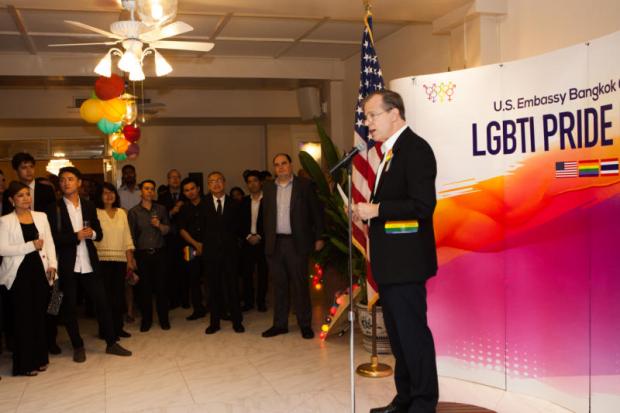