A walking trip based on the Fine Arts Department's project to bring the old Front Palace back to life via research, multimedia and reconstruction techniques can inspire similar cultural excursions by other tourists

published : 28 Jun 2018 at 04:00
newspaper section: Life
writer: Story and photos: Pichaya Svasti
Wat Bovornsatharnsuthavart, or Wat Phra Kaeo Wang Na, was a part of the old Front Palace. With the art of the Third Reign, this temple was commissioned by Krom Phra Ratchawangbovorn Mahasakdipollasep, the viceroy of King Rama III. Its only hall has a jaturamook-style roof with four gable ends, decorated with khruang lamyong, like the Grand Palace's throne halls. According to oral history, its founder had intended to build a prasart-style roof reserved for kings only, but his attempt was stopped by King Rama III citing inappropriateness. The doors and windows of the hall are decorated with Chinese pottery and stucco flowers on the outside. Murals on the interior walls of Wat Phra Kaeo Wang Na's only hall depict the legend of Phra Phuttha Sihing as well as Hindu gods. Meanwhile, the hall's principal Buddha statue, a standing one with his hands lifting at the level of the chest, is enshrined on an unfinished throne because the temple's founder passed away at the age of 47, in 1832, before the project would be completed. Eighteen years later, in the reign of King Rama IV, the second monarch, King Pinklao, had the palace and the temple restored. He had murals depicting the legend of Phra Phuttha Sihing and the lives of the 28 Buddhas painted on the hall's lower and upper interior walls. However, the king passed away before his wish to relocate Phra Phuttha Sihing from Phutthaisawan Throne Hall to this hall could be fulfilled.

It was a fine sunny day when more than 70 culture vultures strolled the old Front Palace (Wang Na), the palace of viceroys in the early Rattanakosin period, near Sanam Luang, to learn about its history, importance and changes. Anyone wanting to know the old palace as more than just the National Museum Bangkok can follow the footsteps of the recent "Walk With The Cloud: The Hidden Palace", led by Khun Sirikitiya Jensen, an official of the Fine Arts Department and the youngest daughter of Princess Ubolratana. 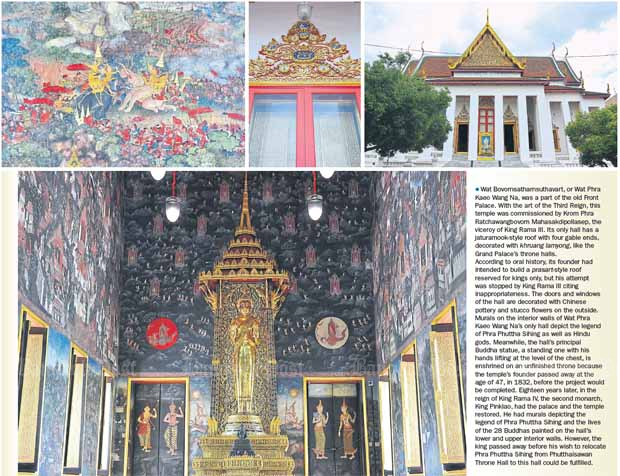 Founded in 1782, the same year as the Grand Palace, the Front Palace was one of the very first structures of the Rattanakosin period. It comprised what is now Thammasat University, the National Museum Bangkok, National Theatre, Bunditpatanasilpa Institute and the northern part of Sanam Luang. It was the residence of Bangkok's five viceroys (uparat) and one second king during the first four reigns of the Chakri Dynasty. Its founder and first owner was King Rama I's younger brother, Krom Phra Ratchawangbovorn Mahasurasinghanart. The last owner was Krom Phra Ratchawangbovorn Vichaichan, the eldest son of the Fourth Reign's second monarch, King Pinklao. He stayed in this palace for 17 years, until his death in 1885. A year later, the tradition of appointing a crown prince replaced the position of Wang Na in the Fifth Reign, and since then, this palace has served as government offices.

"We will be able to see changes, including those to art, murals and architecture. We will learn about the reasons behind the floor plan and riverside location of the Front Palace. I have organised the walking trip with three lecturers -- an architect, a landscape architect and an art historian -- so that we can see history, changes and connections. We will also discuss the reconstruction of the missing phlubphla soong [elevated pavilion]," Khun Sirikitiya noted during the trip.

On the trip, the group strolled and stopped to listen to lectures and exchange questions and answers along the route covering the boundaries of the old Front Palace. Apart from Khun Sirikitiya, the lecturers are art historian Prof Santi Leksukhum, landscape architect Pornthum Thumwimol and architect Krittaphat Chuentrakul of the Fine Arts Department, and academic Assist Prof Pirasri Povatong of Chulalongkorn University's Faculty of Architecture.

The trip started at a riverside canteen of Thammasat University, where ruins of the old palace wall were found. What is the university now was the living quarters of the Front Palace's princesses and palace ladies.

"The name Wang Na is derived from the word uparaja, dating to over 1,000 years ago and meaning viceroy. In what is now Thailand, the uparaja stayed in Si Satchanalai during the Sukhothai period and Phitsanulok during the Ayutthaya period. These towns served as gateways to the capital cities. Meanwhile, Prince Damrong Rajanubhab [the Father of Thai History] had a theory that Wang Na was called so because it was at the front of the Grand Palace. The roles of the viceroys were being the front-liners at war and the protectors of kings," Khun Sirikitiya said. 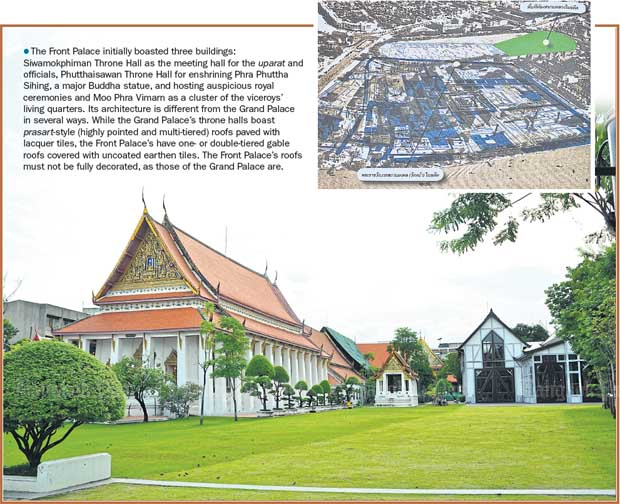 According to landscape architect Pornthum, the Front Palace was situated on the east bank of the Chao Phraya River opposite the mouth of the Bangkok Noi Canal and near Klong Rob Krung, the city moat. Its large size, similar to that of the Grand Palace and its riverside location, reflects its importance in terms of strategic location and role as protector. The viceroys and their soldiers must go to war first and protect the city, since they were north of the Grand Palace, and Burmese invaders usually came from north.

After the briefing, the group left the university via the exit on Phra Chan Road and headed east toward Sanam Luang to see the area where phlubphla soong once stood.

On the National Museum Bangkok grounds, the group stopped in front of Phutthaisawan Throne Hall to listen to the lectures and look at a sketch and old photo of the missing Kotchakam Prawet Pavilion, which was built in honour of King Pinklao, the second monarch of Siam during the Fourth Reign. The group later entered Phutthaisawan Throne Hall to worship Phra Phuttha Sihing, the principal Buddha image, and see murals which mix the art styles of the late Ayutthaya period and those of the First and Third Reigns of the Rattanakosin era. They also visited Issaresrajanusorn Throne Hall, which was King Pinklao's European-style living quarters.

The Front Palace was divided into three zones -- the outer zone for soldiers to safeguard; the middle zone with the hall of Buddha statues; Siwamokphiman and Phutthaisawan throne halls; and Moo Phra Vimarn, the inner zone where the viceroys lived. All of these zones are now the museum's exhibition halls. Several more mansions were built during the reign of King Pinklao. Among them were Kotchakam Prawet Pavilion, Mangalapisek, Ekalongkot and Issaresrajanusorn Throne Halls. Only the Issaresrajanusorn Throne Hall still stands.

The last destination was Wat Bovornsatharnsuthavart, or Wat Phra Kaeo Wang Na, which is now in the compound of the Bunditpatanasilpa Institute. It was a highlight due to its interesting history and art styles. Murals on the interior walls combine the traditional Thai and Western perspective drawing approaches and depict both traditional Thai and Western-style architecture, decorative items and outfits.

The Front Palace's architecture was highly influenced by that of the Ayutthaya period and mirrors its users' political and social status, which was strictly applied during the early Rattanakosin period.

Therefore, visiting the old Front Palace is an opportunity for tourists to see Ayutthaya and early Rattanakosin-style architecture and art while learning about Thai history and changes over time. 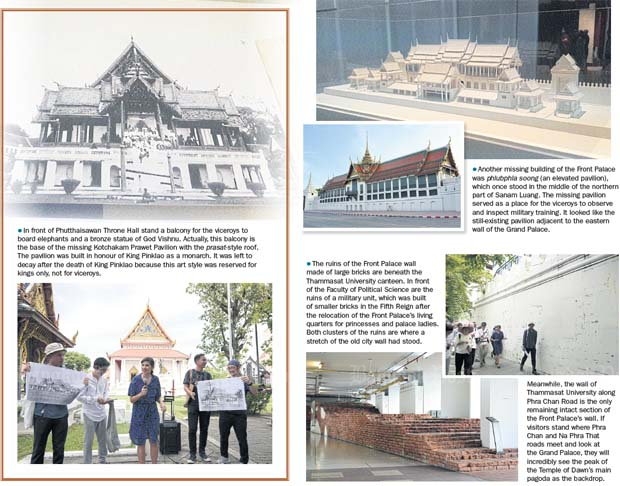