High turnover is a growing headache for businesses worldwide, especially as more people leave the corporate world behind for a life of entrepreneurship. You can't keep everyone, but building human relationships goes a long way toward making your company more desirable, says Gerrit Bouckaert. 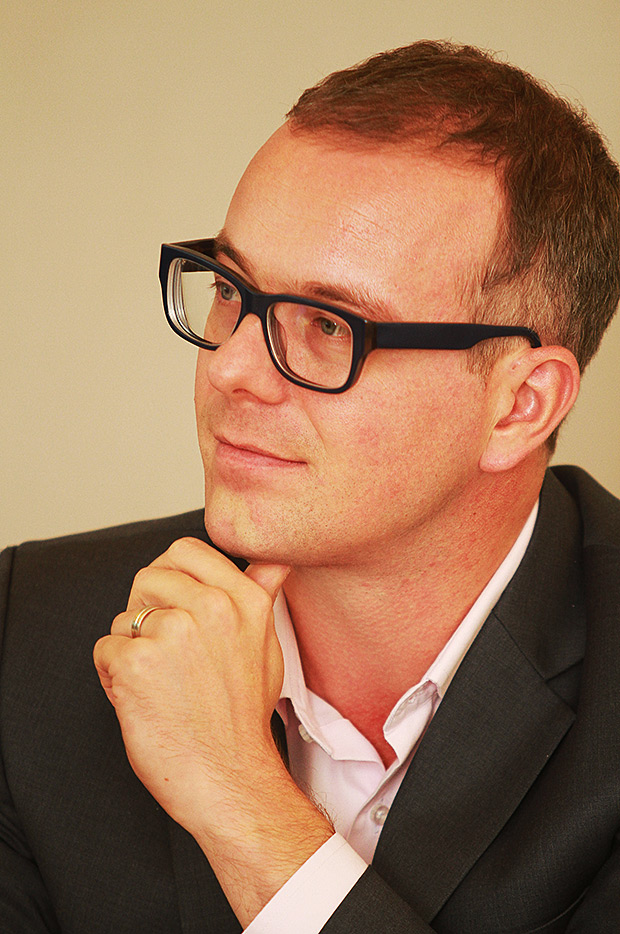 "How you retain people is through close contact such as involvement in decision-making and good communication about decisions, but sometimes I've failed at that as well," says the managing director for Thailand and Vietnam of Robert Walters Plc, the multinational recruitment specialist.

Misunderstandings are inevitable from time to time, but the key is not to give up, the Belgian executive says.

"It's a human thing to make mistakes in communication. We do it with our partners and our employees. But as much as you can, try to have that level of communication and engagement with your staff, as I think that is still the number one reason why people stay in a job.

FAMILY
- Married and expecting a daughter later this year

"Yes, CSR (corporate social responsibility) gives purpose and gives something back, while technology can enable that communication and make it better, but ultimately it is still between humans. If you miss out on the human aspect, you will miss out on a lot of other things as well."

Mr Bouckaert pauses to share a joke with one of the staff accompanying him to the interview, which draws a smile and underlines the point he has been trying to make about achieving a level of closeness.

Communication is Mr Bouckaert's forte -- he holds a master's degree in communication science from Katholieke Universiteit Leuven in the Dutch-speaking town of Leuven, capital of the province of Flemish Brabant in Belgium. He then went on to receive another master's degree in management from Vlerick Business School in Ghent in 2007.

He offers an example for leaders seeking to improve their level of communication with their employees. While he was working on his thesis, he says, he had a professor who had worked as a negotiator in apartheid-era South Africa and had also worked alongside Thabo Mbeki, South Africa's second president from 1999 to 2008. The professor said that while he had facilitated various peace negotiations in the past, he found Mr Mbeki somewhat of a "colder" person.

"He was quite distant, so his desk was quite far away in his big presidential office, and what my professor told him is, 'Okay, we are going to destroy this table. We are going to make a space here in the middle and you are going to sit there when somebody comes in.' Then and only then can you see that dynamic between two people working together, and that it is much closer and much warmer over time."

Effective communication between employers and employees, he emphasises, requires leaders to "step down from that ladder of yours". Instead of "directing people, you have to work with people".

Mr Bouckaert joined Robert Walters in Thailand in 2013 and was given additional responsibility as country manager of Vietnam in April 2016. He was promoted to managing director in the second quarter of this year and currently heads the recruiter's businesses in both countries. Established in 1985, Robert Walters is now present in 28 countries and listed on the London stock exchange, with founder Robert Walters till serving as CEO.

Prior to joining Robert Walters, Mr Bouckaert worked for another recruitment firm, Michael Page, for six years in various capacities with a focus on the banking industry in Geneva and Antwerp, and helped launch the company's new office in Ghent in 2011.

After his successes in Europe, the Belgian native was then sent to develop recruitment teams in Mumbai and Tokyo before Robert Walters approached him to head its Thailand and Vietnam offices.

Robert Walters' first branch in Southeast Asia was in Singapore, followed by the Thailand office, which this year is celebrating its 10th anniversary.

"We started with four people and now we have over 60 people working here," Mr Bouckaert says with a gleam of pride in his eyes. "What we do is specialist recruitment to senior level and management positions up to C-level, where 98% of the demand from our clients here would be for Thai talent."

"This really helps when they go to see clients. For example, if they meet a CFO who is looking for a financial controller, our recruiters will know exactly what the CFO wants. It also works well on the candidate side because the recruiter will be able to assess that candidate much better on the technical level."

In addition to banking and financial services, the company works with clients in engineering and manufacturing, general management, human resources, information technology, legal, sales and marketing, supply chain and procurement, along with pharmaceuticals and healthcare.

In the course of overseeing his firm's activities in two markets, Mr Bouckaert has observed one significant difference between ageing Thailand and young Vietnam when it comes to openness to foreigners. Vietnam still needs a lot of expertise from abroad, especially on the manufacturing side. This means that it is quite open and flexible in welcoming foreign talents to help build up manufacturing capability.

"Foreign direct investment in Vietnam is huge at the moment, with a lot companies coming back from China and moving toward Vietnam to set up their manufacturing there," he says. "Due to the young population, Vietnam has a lot more software developers and IT professionals as well, and the country is becoming more of a major hub for IT in Asean."

Vietnam also is a more "candidate dry" market than Thailand, with a great need for talent at the senior level. Otherwise, its recruitment market is quite similar to the rest of Southeast Asia, where all multinational and local companies are looking for the same types of talent. The challenge this poses has prompted the firm to develop some new proposals for clients.

A recent Robert Walters white paper identifies and analyses the human resources challenges faced by Asian companies looking to grow internationally. It is based on a survey conducted by the firm among more than 5,000 HR professionals, hiring managers and candidates working in Asian and Western companies across mainland China, Indonesia, Malaysia, the Philippines, Singapore, Thailand, Taiwan and Vietnam.

"Across the board (in Southeast Asia), it is all a candidate-dry market where all the multinationals are trying to fish for similar talent and local businesses are trying to get that type of staff as well. Why? This is because they want to expand internationally," Mr Bouckaert points out.

Asia is now home to more global giants than any other continent. The latest Fortune Global 500 list in 2018 shows that 40% of the 197 companies named were Asian compared with 24% in 2006. "This growth in influence has not yet peaked," the authors of the white paper wrote.

Oxford Economics, the paper points out, has predicted that the expansion of Asian businesses as international players will continue steadily over the next decade as economic power is shifting eastward.

"Even though 98% of the talent required here is Thai, Thai companies might also be looking for foreign talents for regional roles, for example, somebody to develop the Indonesian market," says Mr Bouckaert. "But what they prefer is to have Thai people who have worked in Singapore who can then come home and take on a regional role to support regional growth from here. That is always the preferred way."

The greatest challenges the surveyed companies have identified are that applicants' expected salaries are much higher than their budgets; candidates are not a good cultural fit with the company; there are not enough quality applications to choose from; and it is difficult to find candidates with skills that match business requirements.

"As more foreign companies come here and as business for Asean companies expands, the more need we have for talent," he says.

"If you are fishing in a pond that does not have enough fish for the demand of the fishermen, you will get into a price war and that reflects the number of salary increases people get when they move jobs, especially from a very niche position."

The average increase in salary that people receive when they move to a new job has fallen from 20-25% five years ago to 15-20% currently. But for high-demand, niche jobs, the increase is 50-60%. This reflects the fact that companies are fighting for the same talents.

"If you are looking for a specific skill set that maybe 50 people have in Thailand, obviously these people will get a lot of calls from employers and recruitment companies, and companies will have to compete on a salary level," says Mr Bouckaert.

This reflects the finding in the white paper which indicates that pay and benefits as the number one factor that motivate international professionals to take up a job opportunity with an Asian company. The remaining top five factors are: belief in the company's growth potential, brand name and reputation of the company, career prospects and promotion opportunities, and sense of entrepreneurship.

In Thailand, Mr Bouckaert believes many young people are coming into the job market with little to offer because few have done any kind of internship before they apply for a paying job. If candidates can improve this side of their CV it would also be a way to help lower the level of youth unemployment.

"One of the ways to reduce that gap is to at least get people to have some contact with work and employment via internship or graduate trainee programmes, as it would provide more realism and help people to understand where they eventually want to go with their career," he says.

"An example is me in Europe where I did three internships between the ages of 18 and 22, each for four to six months. I worked as a journalist for a film festival, I worked in HR and I worked in recruitment, and that gave me the sense of direction of what I wanted to do."

Mr Bouckaert was facing a choice between communication and psychology as a career and considered himself more of an amateur psychologist than a communication scientist. But his studies and internships have convinced him that "communication is the key in an organisation".

"The most important thing in communication is not what you have to say but it is about understanding who you are talking to and how you are going to convey that message to somebody else," he says.

"You can be as smart as you want but if you don't get your message across in a decent way, you won't be very successful."

Exhibit examines the language of the lens

A modern twist on tradition