'I kept sending him money'

A faded celebrity's attempts to part women from their money have fallen apart after a group of his victims, wary of his troubled history on the internet, came together to lodge complaints with police.

Technology Crime Suppression Division police and Metropolitan Police Bureau officers last week arrested Athikun "Ken Lee" Chotithanatpiti, 25, for allegedly conning at least 10 victims out of 10 million baht in a series of scams which in recent times extended to threats of violence and blackmail.

Police say Ken Lee, known for his Chinese-style good looks, preyed on women looking for partners at dating sites, offering to sell them brand name goods including high-end phones but failing to deliver. He also asked victims to invest in a convenience store.

Officers arrested him at his home in Pathum Thani on warrants issued by the Phra Nakhon Nua court, and Thanyaburi court, on dishonesty and Computer Crimes Act charges.

Ken Lee is perhaps best known for his appearance six years ago on a dating show, Take Me Out Thailand. Doubts about his fraudulent leanings were apparent even then when a former girlfriend surfaced to say he had "borrowed" 70,000 baht and failed to return it. Since then victims have added his name to a "blacklist seller" site along with excerpts from online chats where he sets up various deals.

In his latest offending, Ken Lee would flirt with women on dating sites and after they formed a bond, offer to sell them an iPhone 12 for 30,000 baht, plus giveaways. His victims say they transferred the money, but never received their phone. His victims appear to have fallen easily for his charms, with one Bang Rak office worker sending him more than 2 million baht before finally alerting the police.

Sutham Lapmeemak, 52, who runs a business selling face masks, said her niece, 25, met Ken Lee on a dating app last October. She sent him money for the phone but he failed to deliver. Ken Lee, she said, offered a variety of excuses, including that he was waiting for partners in a business venture to invest.

He also claimed his bank account had been seized and asked the young woman to make a series of transfers to another account, to help build a history of credit. Later, when the pair's relationship deteriorated, he turned to threats and blackmail. Ken Lee allegedly persuaded his victim to make a video clip of her naked and said if she wasn't prepared to send more money he would release it publicly, shaming her.

"My niece was scared and sent him money until the total exceeded 2 million baht," she said. "I started to get suspicious as she kept asking for money so I questioned her closely and the details came out."

Other victims looked up his name on the internet and discovered he had been in trouble for dodgy dealings in the past. They made contact and shared details of his exploits, including selling concert tickets which never arrived, and the bogus convenience store venture. They say he had also threatened to assault his victims or their families if they posted to social media about their plight.

Another victim, 22, said she also fell victim to Ken Lee's phone scam. She believed in him because he was going out with a woman she knew. After she sent the money but he failed to deliver, he spun the tale about his account being seized. He had her transfer money to another account many tens of times to impress the bank. "I wanted my money back so kept making transfers. Someone claiming to be a bank official would call me and let her know the balance each time.

"Ken Lee also told me that if didn't help he would be charged with falsifying documents and fraud, so I agreed to help out. Over a three month period, I lost over 700,000 baht," she said. Victims gathered at Sutthisan police station where Mr Ken Lee was questioned following his arrest.

A motorcycle taxi driver admits he threatened to kill a woman motorist who crossed his path but refuses to apologise, even after being charged with carrying a weapon illegally. 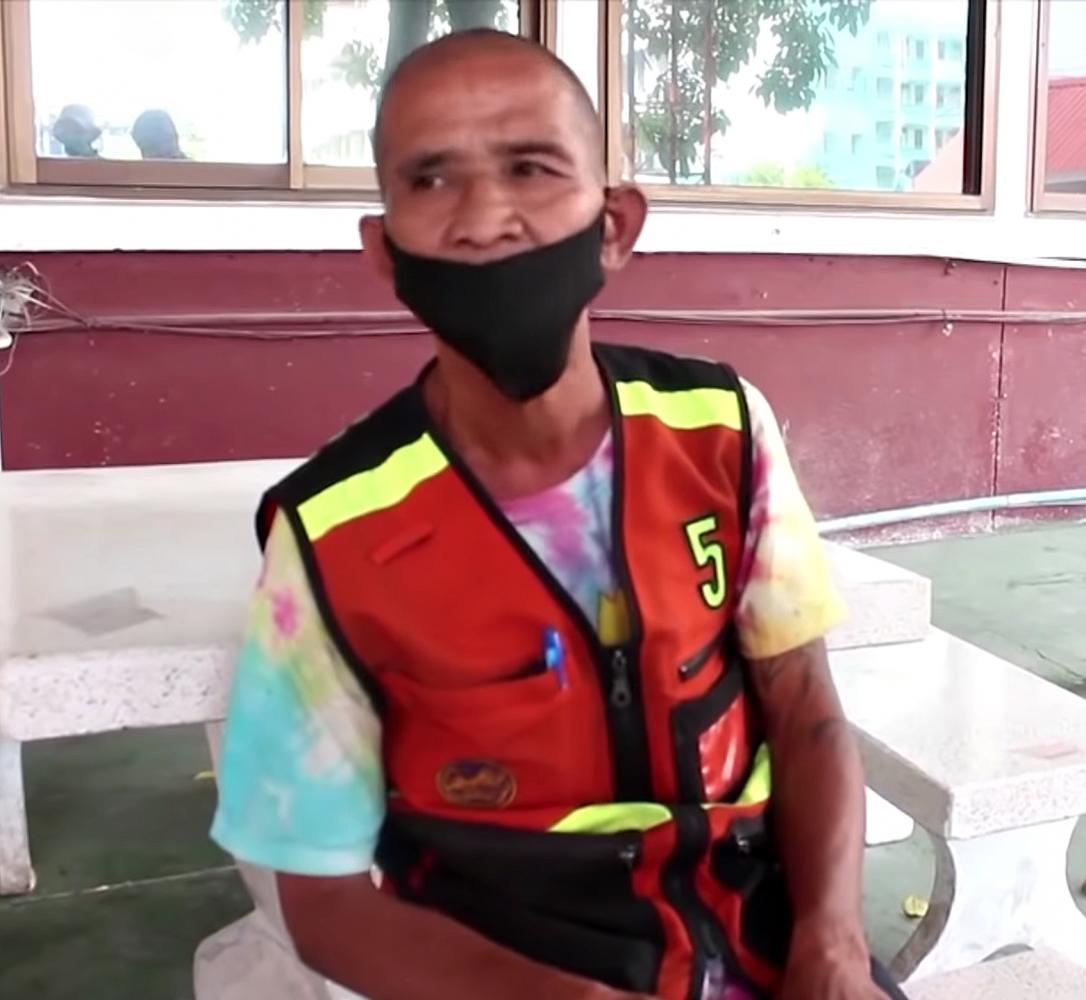 Chuchart Wiangkam, 49, told police last week the woman, who was travelling on the Rangsit-Nakhon Nayok Road on Feb 12 when she allegedly cut in front of him, was lucky to escape with her life. "If she had been a man I would have smashed in her window," he said, recalling the incident in which he told the motorist, Paveenuch Ngokkham, 24, that she "had to die".

Mr Chuchart, who wears the number 5 vest at the Win Srinithi stand on soi 139 Phahon Yothin Road, in Pathum Thani's Klong Luang district, said the woman cut across his vehicle, almost sending him under a six-wheeler lorry.

However, rather than apologise she asked him what had happened, as if she was innocent of any wrongdoing. He admits slashing the car with a knife he was carrying. 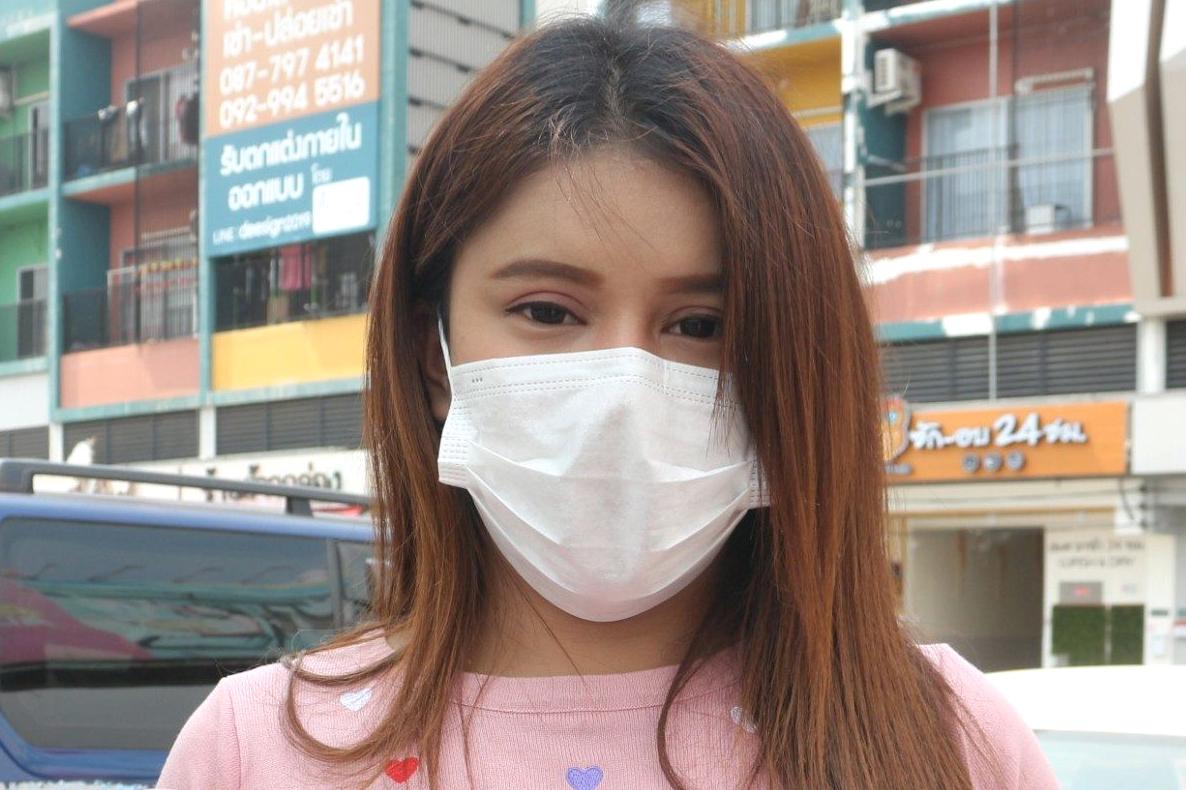 Ms Paveenuch said she was driving in the middle lane as she intended to turn left. She put on her indicator and turned, and shortly after heard someone honking his horn at her: "Park, mueng, park," he said brusquely.

She pulled over, opened her window and asked what was wrong. "When he took out his knife and started swearing at me, I quickly closed the window again," she said.

After attacking her side vision mirror and the vehicle with the knife, and kicking the bodywork, he rode off. Ms Paveenuch, who made a video clip of their encounter, laid a complaint with Pratunam Chulalongkorn police.

In the clip, he is seen bellowing at her, and stabbing the vehicle with his knife. The victim's elder sister, Pannapa Seetangkhom, who posted the clip to social media.

Mr Chuchart, who handed himself in the next day, refused to offer an apology or pay for damaging the vehicle. "I said while she has metal covering her (the protective frame of the car), I am merely sitting on metal (his bike). If something had happened to me, who would take responsibility?"

He said if the driver had not closed her window, "I swear I would have taken my knife and stabbed her to death".

Mr Chuchart said he had been a motorcycle taxi driver since 2004, after serving time in prison for murder.

A motorcycle taxi driver who sits at the same stand, Mana Saengyen, 48, said Mr Chuchart, married with two children, is a hothead. "If someone says something not to his liking he flares up," he said.

Commenting on publicity about the case, Mr Mana said he was worried his income would take a hit as customers, scared about Mr Chuchart's exploits, may be too scared to approach. "I want to tell people it was a personal matter and urge them not to lump all motorcycle taxi drivers together. I saw him this morning but he didn't say a word about it," he said, referring to Mr Chuchart.

Police charged him with carrying a weapon in a public place and scaring others, and damaging property.

Behind the tatty curtain

A private school teacher nabbed with a teenage student at a short-stay motel in Chiang Mai insists they are lovers and denies he asked for sex in exchange for better grades. 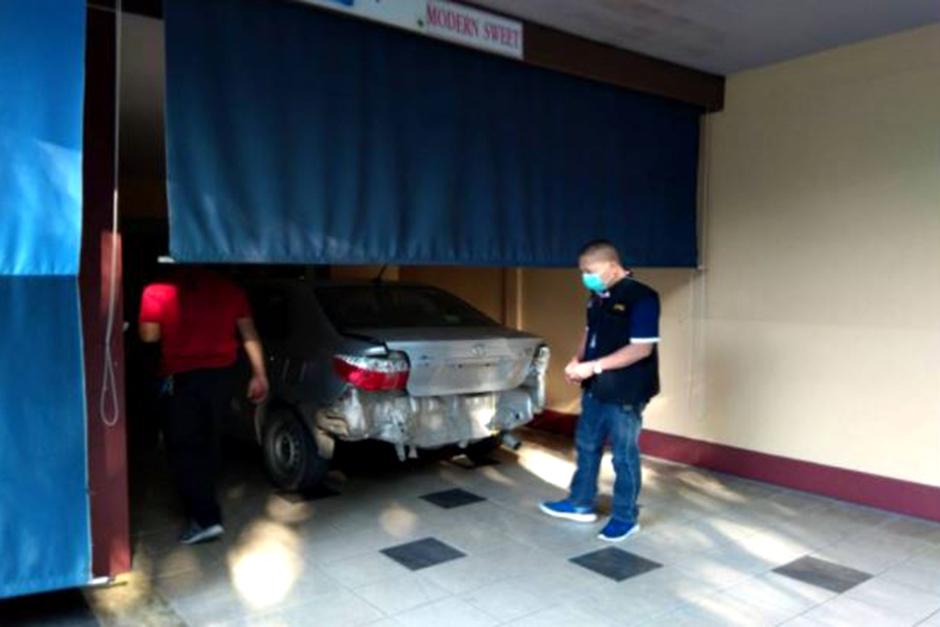 The short-stay motel in Chiang Mai where the school teacher took his student for sex.

Anti-Human Trafficking Centre police from Provincial Police Region 5 accompanied by staff from the Children, Women and Families Protection Centre nabbed the man, aged 39, at the motel in Chang Phueak, Muang district on Feb 12.

Earlier, a student from the school contacted the centre to say the teacher was having sex with students in return for doctoring their marks. He was found in a room with a girl, aged 15.

The teacher, whose name was not disclosed, confirmed he teaches the girl in class but denied helping her with her grades. "We are lovers and have been coming to the hotel for the past two years. However, we cannot tell anyone as she is under-age," he claimed.

Police had earlier followed his Toyota Vios to a department store on Superhighway Road where he picked up the girl. From there they went to the hotel.

Thai Rath newspaper said the private school where the teacher works had received complaints about his conduct in the past and formally warned him. However, he had also resigned, to take effect in April, when he was busted. The Bureau of Private Vocational Education Administration had set up a panel to investigate. If the latest complaint has grounds he could lose his teaching licence for life.

Police are taking a sceptical view of the man's claims they were lovers and want to hear from any other students who might have been seeing the suspect. They say the girl is back with her parents and is also being cared for by social workers.

They have charged the man with depriving parents of their child, a minor, for the purpose of performing indecent acts. He denies the charges and has been released on bail.