Taking it to the sea
Life
Social & Lifestyle

Taking it to the sea

Dee* is usually a quiet girl, but decided to speak in front of 300 people to tell them what they could do to protect endangered whale sharks.

Dee is one of the many young people participating in programmes sponsored by the Education Environmental Center (EEC), which offers many courses on the environment and wildlife protection.

"Dee said whale sharks could not speak up for themselves, so she had to speak for them," said actor and director Alex Rendell, Thailand's Goodwill Ambassador for the UN Environment Programme (UNEP) and founder of the EEC.

Alex established the EEC five years ago because he "wanted to educate young people about the environment".

As part of the programme, children as young as three are taught how to snorkel while 10-year-olds and up learn how to dive.

"We want them to experience the underwater world, so they will want to protect the environment in the long run," Alex said.

Alex spoke about the EEC at the recent online forum "Run For The Oceans: Gathering To Discuss Thailand's Sea Amidst The Covid-19 Pandemic", which was organised by Adidas. 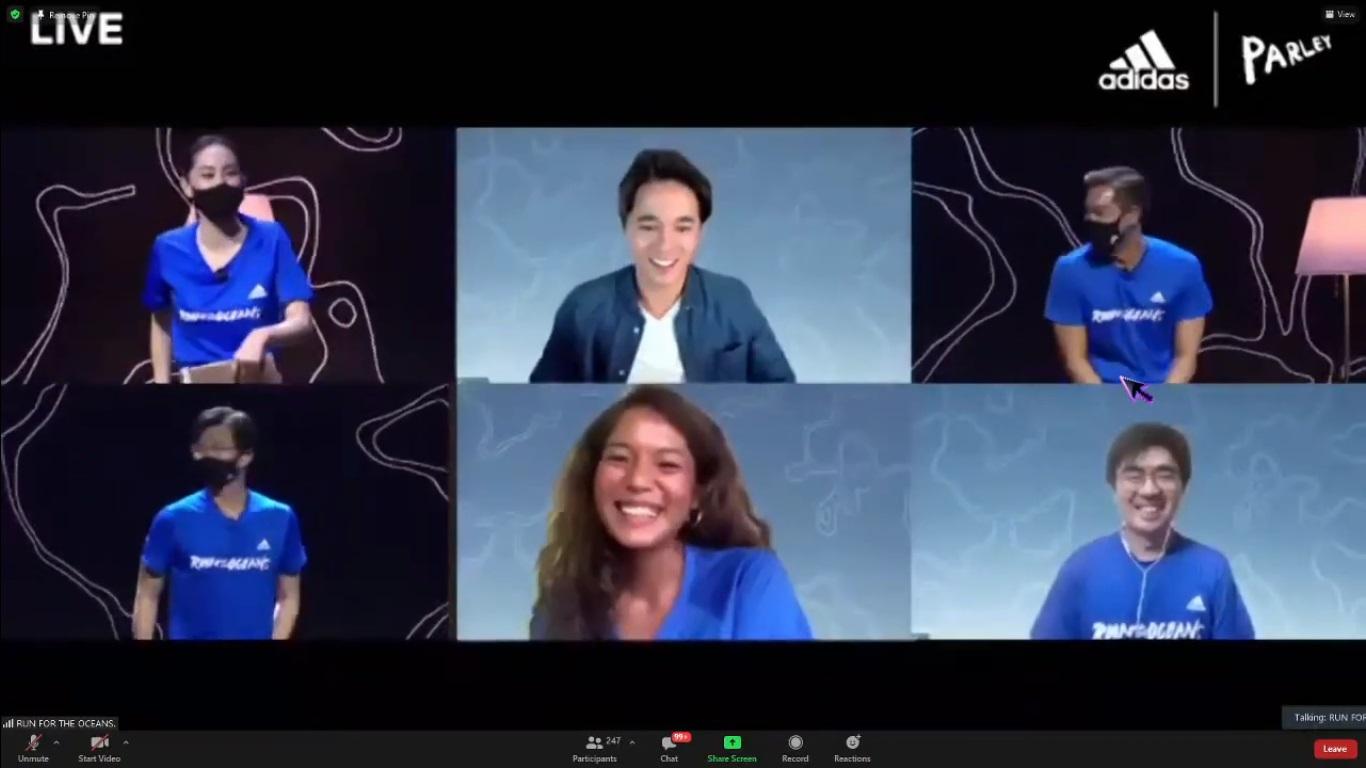 Above from left, Sujira Aroonpipat, Alex Rendell and Tulyatep Uawithya. Below from left, Petch Manopawitr, Naiyapak 'Nancy' Poompak and Prem Pruktayanon at the online talk forum: 'Run For The Oceans'. Photo courtesy of Adidas Thailand

"Run For The Oceans," launched by Adidas in 2017, collaborates with Parley, an organisation of ocean conservation focusing on plastics in the sea. In Thailand, "Run For The Oceans" was launched in 2018. The project encouraged runners to jog and pick up trash around Chaosamran Beach in Phetchaburi.

"We were surprised to see the huge amount of trash after only 2km of jogging," Tulyatep said.

The next year, Adidas evolved the event from collecting trash to educating students in Klong Bangpu.

"We educate young people about types of garbage and waste sorting. Picking up trash does not solve the problem at the root, however, educating people can reduce the cause of problems in the first place," said Tulyatep.

Due to the Covid-19 pandemic, "2021 Run For The Oceans" was arranged online. Petch, a Phuket native, noted that it was the culture of local people in Phuket to dig up turtles' nests to collect eggs to eat.

"I was very young at that time. We didn't have knowledge about marine conservation, so people dug up turtle eggs even though turtles hardly lay eggs in Phuket," Petch said.

As people learned more about conservation, turtles returned to the area to lay eggs, including the rare leatherback turtle.

"This was important because only one among thousands of leatherback turtles will survive," Petch said.

He referred to a report that stated the magnitude of ocean plastic is much more than people can manage.

"If we do not work on waste sorting, waste will be buried in a landfill and flow into water sources and then to the ocean. A report cited that eight to 12 million tonnes of plastic debris flow to water sources and oceans each year, comparable to one garbage truck dumping plastic waste into the ocean every second," said the environmental scientist.

During the pandemic, the number of tourists in Thailand has decreased, so areas around the ocean have become quieter than usual, which has had a positive effect on the environment.

Naiyapak noted that baby sharks have returned to the closed-off Maya Bay in Krabi, while many corals have recovered also.

"It was impressive. Perhaps, because speed boats do not bother them as much and other boats do not cast anchors there," she said.

Environmentalists, like Naiyapak, are thrilled to see baby sharks at the beach but many tourists may not feel the same because of the frightening image of sharks portrayed in popular media. Petch said people should not worry about predator sharks because they do not consider humans to be their prey.

"Don't be afraid. Humans are not their diet," he said.

"Sharks in the ocean are like tigers in the forests. Predators are necessary for an ecosystem. If there are no predators, it will be disastrous for the ecosystem. A fish may become a dominant species and cause an imbalance in the ecosystem," he added.

Without mass tourism, marine creatures and resources have been revived. However, Alex said that even without tourists, the beaches he visited were full of trash.

"I visited an island after the first lockdown last year and was surprised to see tonnes of trash there. I expected to see beautiful beaches since there were not many tourists. However, due to the lack of tourists, no effort was made to clean up the trash, some of which appeared to have drifted in from other countries," he said. 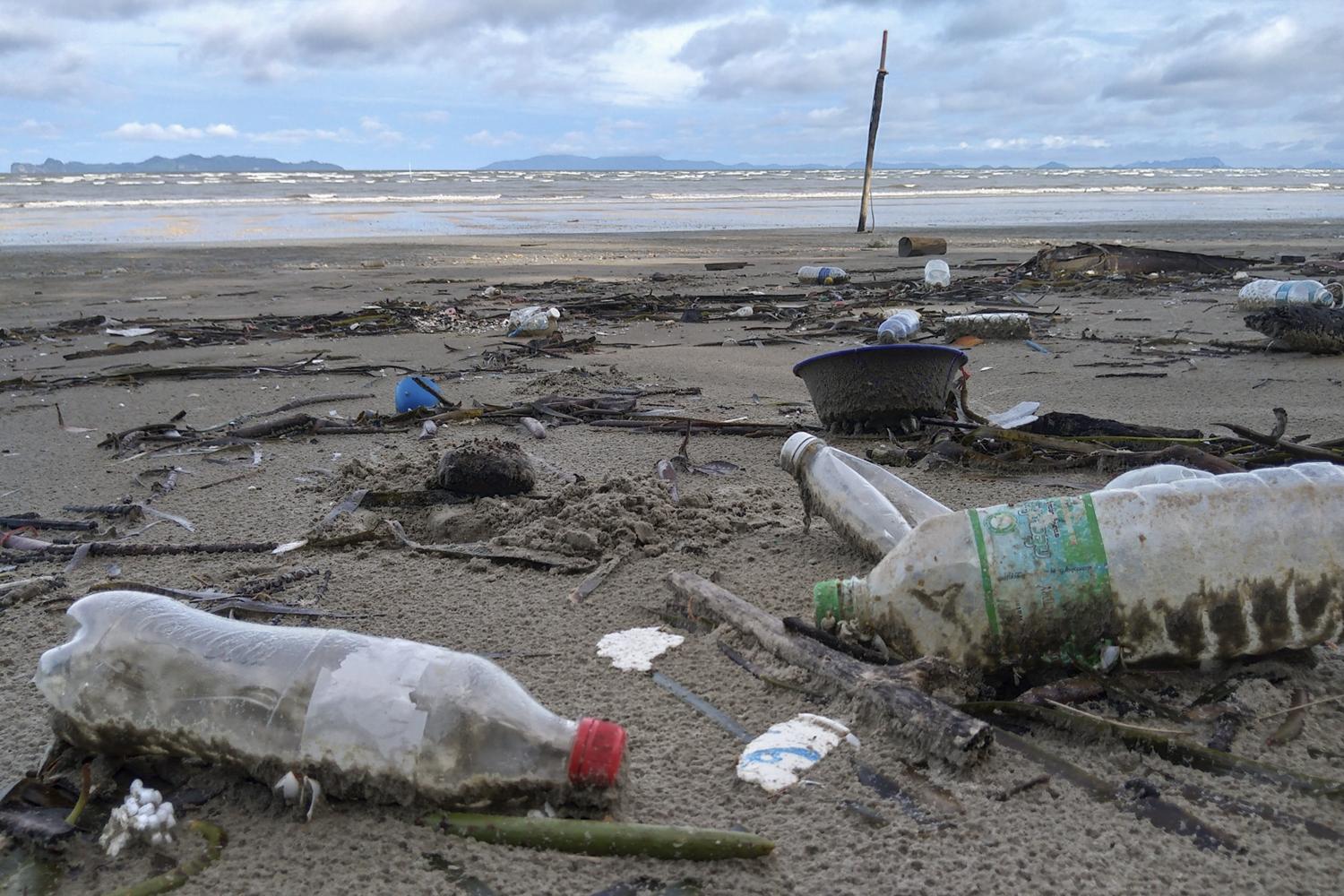 Saving the ocean from the magnitude of plastic waste needs cooperation from everyone. Prem encouraged people to sort waste, so it will be recycled instead of going to landfills.

"Thais misunderstand that garbage collectors like to mix all kinds of trash together. In fact, garbage collectors earn extra money by waste sorting. Garbage, like plastic, aluminium cans and paper can be sold. If we separate waste and put each type in the same bag or label what is inside, the collectors will not toss it in the landfill," said Prem.

Tulyatep said Adidas has created shoes where the upper part is made of recycled ocean plastic. He showed off a T-shirt and shoes made from recycled plastic called virgin polyester.

"Once the customer no longer wants the T-shirt or shoes, he can return it to Adidas. The company will digest those items into materials that can be used to produce a new product. However, this is an ongoing project. Adidas plans to use 100% recycled polyester in their products by 2024," said Tulyatep.

Petch suggested the oceans can be saved by following the principle of reducing waste -- reduce, reuse and recycle. However, at some point, the private sector must step in to help customers while the government must push policies to support individual activities.

"Many people carry their own bottles but it is difficult to find clean drinking water to refill. In London, the private sector built many water refill stations. This kind of corporate social responsibility encourages people to carry their own bottles. Every consumer should speak up that they want responsible companies. This way, their responsibility will not end after the purchase of products," said Petch.

Alex says he sees hope for the future and in working with young people, who enthusiastically respond to conservation efforts.

"I was impressed with many students who were at the ECC. Some of them established their own green clubs at their schools and communities. We should have educational activities about the environment in schools starting at a young age so that the new generation understands how to become environmentally friendly. It should become a part of their natural thinking process," Alex said.