A woman with a reputation for picking fights with the locals was killed by the roadside after hitting a neighbour with her shoe. 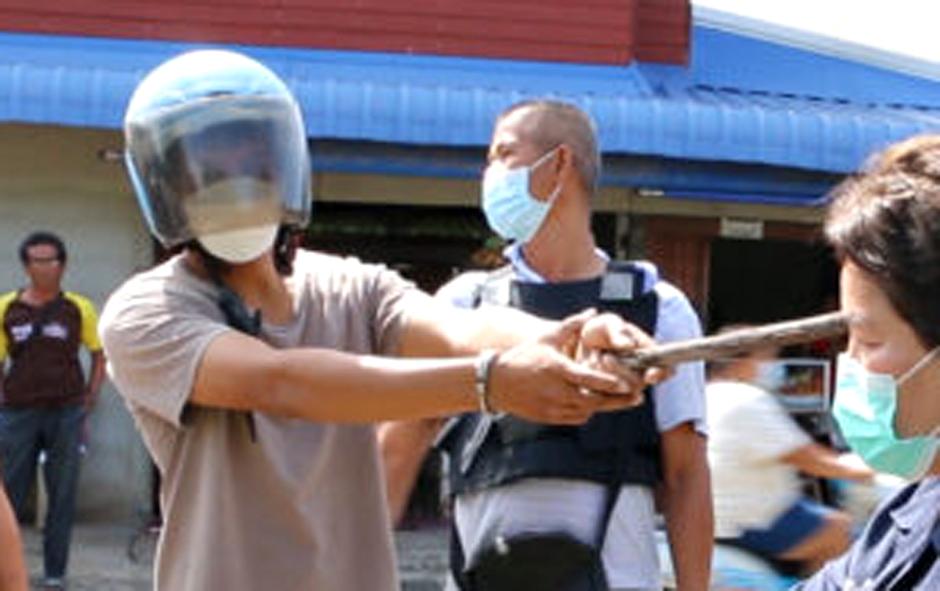 Manchasiri police in Khon Kaen nabbed Poltharat "Katum" Sasikulwarakorn, 27, after he bashed Natthapat Nimnuan, 42, his neighbour, about the head with the butt of a cap gun, killing her.

Mr Katum had accidentally collided with Natthapat while on his motorbike, knocking her off her feet. Natthapat, who raised a large number of dogs on her property, was wheeling her pushbike to the shop in Nakha sub-district to buy food for them.

Natthapat cursed him, according to onlookers, took off her shoe and whacked him across the head. Mr Katum, who had a long-running grievance with Natthapat, said his anger boiled over.

He hit her with the butt of his cap gun, even as she ran for safety. She fell to her feet but he kept striking her, ignoring pleas to spare her life.

Mr Katum was heading to a field to hunt for mice when he came across the victim. He carried onto the field to the north of that spot and while there tossed the gun in a lake before heading home to tell his girlfriend what happened.

Mr Sinthong said the victim was in perennial dispute with the neighbours and was always lodging complaints. In Mr Katum's case, she complained of drug gatherings at his house and accused him of making too much noise.

"She complained to officials, and they went through a conciliation process many times," he said. Locals overheard Mr Katum tell her, 'I have told you how many times?' before the attack took place.

The victim's mother, Piyathida Nimnuan, 66, said her daughter behaved brashly like a man and spoke bluntly to people.

"I know she had problems with neighbours and I warned her off pursuing the matter, but she wouldn't listen," she said from her home, about 300m from the scene of the killing where her daughter's funeral was being held.

Ms Piyathida was visiting Bangkok but returned after hearing her daughter had been killed. She said the victim had called the day before, asking her to come home.

"She said, 'aren't you worried about me, don't you love me?' I advised her to stay out of trouble but later that night relatives called to say she was dead." 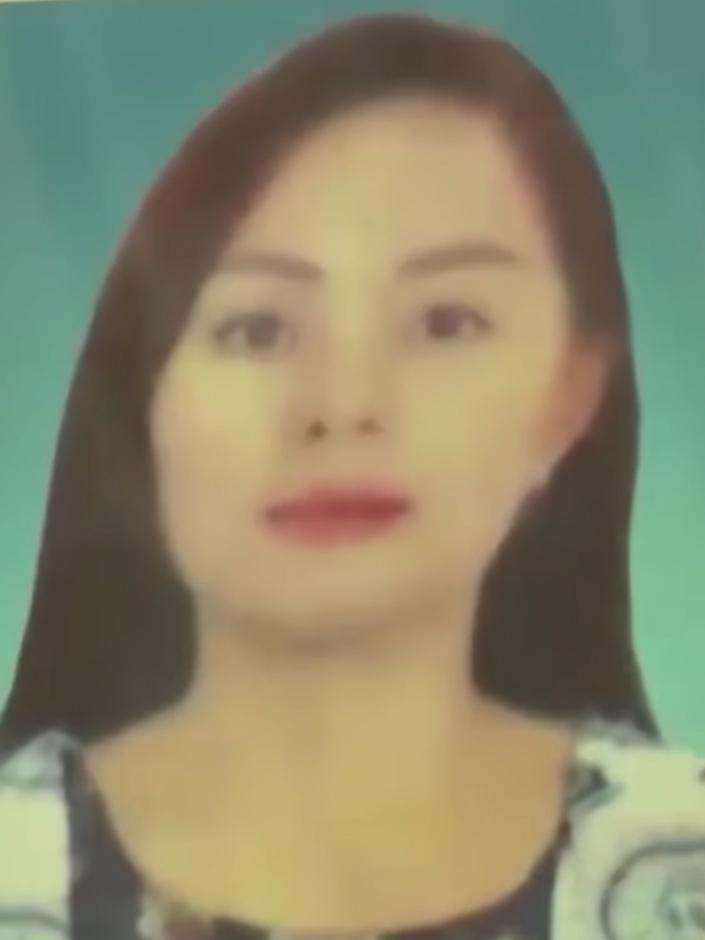 Ms Piyathida said she was shocked, as the victim and her neighbours opposite were distant relatives, even though they were at odds.

"I am sure the suspect intended to do it, as he kept going even after she begged for her life," she said.

Natthapat was her youngest daughter. She has no family other than the dogs, and previously lived in the capital but moved to Khon Kaen.

Mr Katum's wife, Sai, 24, said her husband is hot-tempered and when angry can't control himself.

The victim had lodged her latest complaint about them just the day before, accusing them of holding drug parties and making a racket.

"Katum asked me why she had to make a complaint and turn it into a big deal," she added.

That evening he took someone on an errand into the village then went hunting for mice as usual. "Later, he turned up, apologised and asked me to look after the kids for him."

A friend then sent her a text saying her nuisance neighbour was dead. "I asked Katum if he was responsible and he admitted killing her."

Natthapat herself liked to speak loudly, swear and cause a fuss. However, she would like to beg her family's forgiveness, as her husband had made a mistake. Police charged Mr Katum with murder. 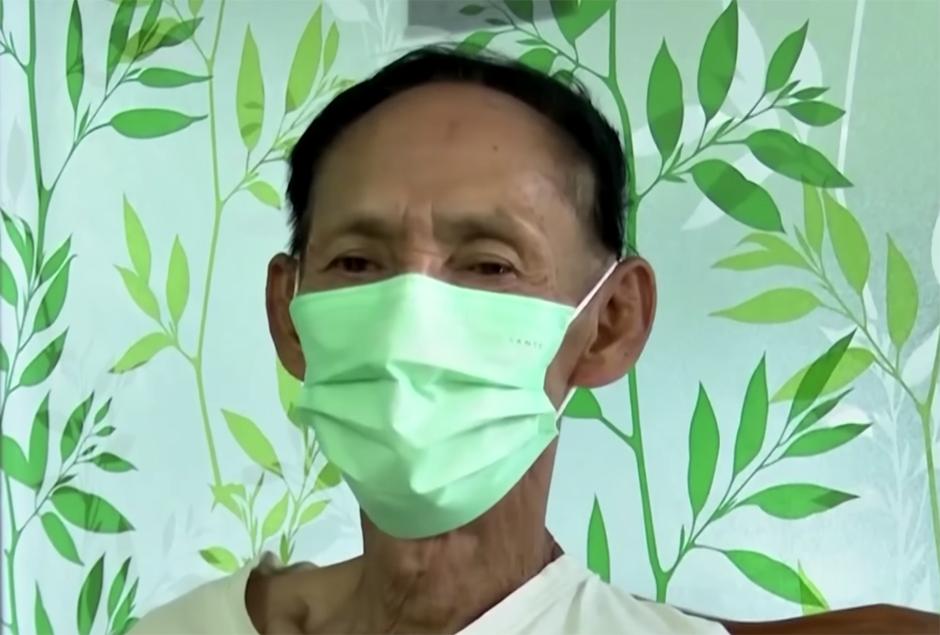 Age no barrier, but money is

A pensioner who was tired of his young fling's behaviour knifed her to death when she asked him to pay for her alcohol.

Doi Saket police in Chiang Mai nabbed Srithon Khueanphet, 73, for killing Supaporn Kaewseedum, 39, a married woman he had been seeing for a couple of years.

Mr Srithon stabbed her to death outside a shop close to Talad Kwan district office on June 12 after the pair argued over the phone.

Supaporn, who had bought alcohol to drink and was sitting outside a distilled street liquor store, had called her older admirer asking him to pay 500 baht. Mr Srithon complained he had no money, and Supaporn cursed him.

Onlookers say Mr Srithon turned up on his motorbike moments later. Supaporn, still angry over their argument, hit him with a plastic chair, spurring a warning from the shop owner.

"Don't do that. That's for sitting. When you are drunk your behaviour is no good," he said.

Supaporn didn't listen, and kept trying to hit the visitor with the chair. Mr Srithon said he lost his patience, took out a kitchen knife he had brought with him and stabbed her.

He said his anger had been building because he could not tolerate her unfaithful behaviour. "She kept making dates to see men even though she was still calling me asking for money," he grumbled. 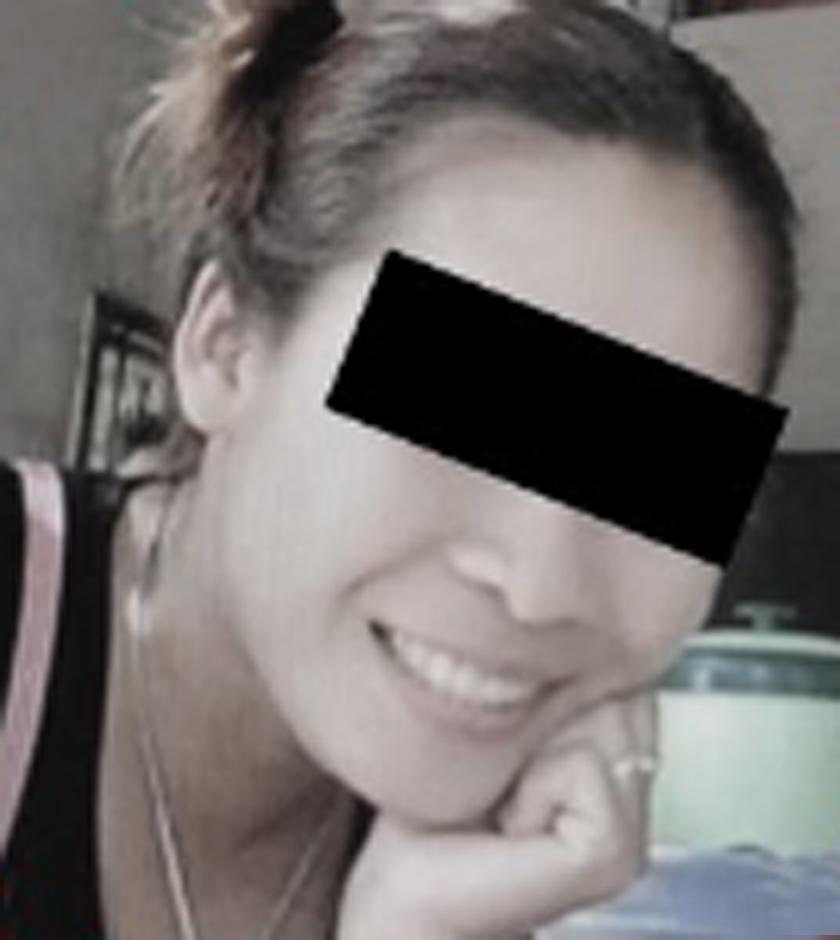 The pair had fallen in love after meeting at a funeral two years ago. "I didn't know then that she had a husband but I thought she was cute. We started talking and I asked for her number. We met constantly after that," he told reporters from the station following his arrest.

However, while he was seeing her, she kept meeting new admirers. "I saw her calling other men. I wasn't the only one in her life, so I was not surprised to hear that she had a husband," he added.

The victim would ask him for money, 2,000-3,000 baht a time. "I am old and have no fixed job. I would give her money that I raised from gambling. My kids live elsewhere and knew about the relationship but didn't object," he said.

"I found out 6-7 months ago about her husband, but she kept calling. On the day of the incident she called asking me to pay for her alcohol. When I refused she swore at me." He scoffed at suggestions he apologise to her husband. "Forget it. What can he do?"

The victim's husband, Sakdipat Nammala, 41, visiting Doi Saket hospital to view her body, said he was stunned by the attack, and doesn't understand why Mr Srithon had to do it.

His wife, who sold electrical goods at a department store in Chiang Mai, had told him about her older male friend. "The old man calls my wife and they talk often," he said.

He was married to the victim for 20 years with a family. Police charged Mr Srithon with murder with intent.

Shaman Mor Pla has poured cold water on an Udon Thani family's claims that a spirit has left tiny footprints in powder scattered through their ageing home.

Jeeraphan Phetkhao, alias Mor Pla, last week visited the family in Mak Khaeng of Muang district after they asked him to investigate.

Tiny prints had started appearing throughout the two-storey house, including on the first-floor window, fridge, staircase leading upstairs, altar and floor of a bedroom in recent days.

Oraphin Pangpee, 43, the owner, said her father bought the house 10 years ago, and the family has been trying to sell it without success.

"We warned him the feng shui was no good as it is located on a crossroads, but he paid no heed," she said.

Seven people live there, including five adults, two of whom -- daughter Uthairat Uton, 19, and her partner, Phuthanate Yupapin, 19 -- claim to be able to communicate with spirits.

However, the tracks, small enough to belong to a child, and imprinted in powder presumably so the occupants can see them, have left them stumped.

Mr Puthanate said he thought their owner was the spirit of a dead child asking someone to make merit so he could be reborn again. He claimed the spirit, or whatever it is, had also thrown a lemon upstairs from the first storey below, so he called him "Lemon".

"The prints even turned up on my motorbike at work. We didn't make them ourselves. We are no longer scared, but we want Mor Pla to investigate," he said.

Ms Uthairat said she had asked folk versed in spirits to come and take a look. "Some said it was a kuman thong (child spirit), others said it was phee kong koi (a one-legged forest ghost). 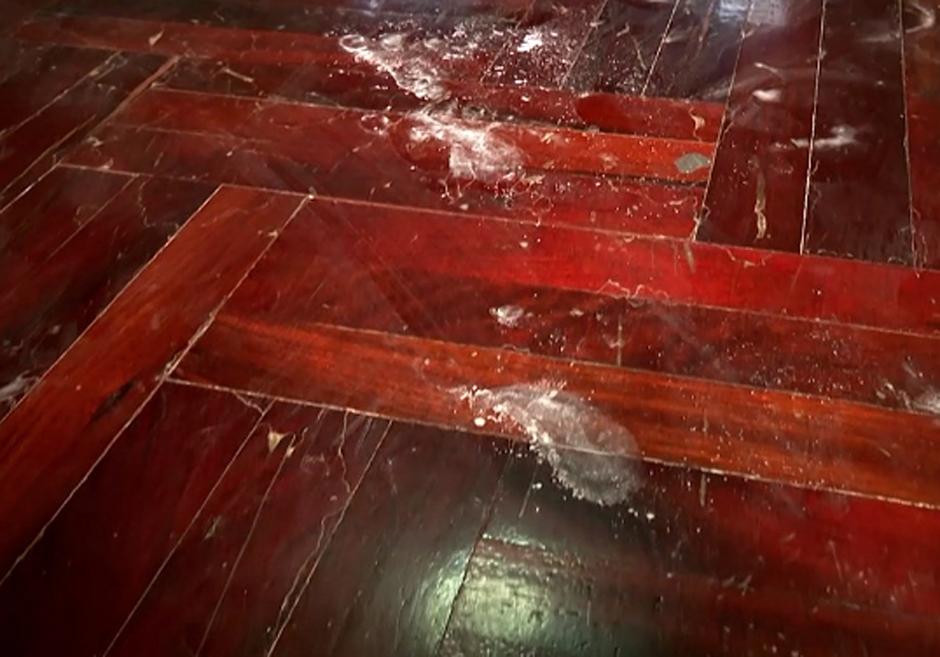 Some of the footprints which appeared on the floor.

"I am not sure what the spirit's motives are, but if I could see him I would like to raise him," she said.

Ms Oraphin thought at first it might have been her daughter, Nong Chompoo, aged 4, but she denied leaving her prints in powder.

Mor Pla, a celebrity shaman who specialises in outing corrupt and misbehaving monks, spent about an hour at the house chatting to the occupants and examining the prints.

He took photographs of the prints and compared them with fingerprints offered by Ms Uthairat and her partner. He said the prints found in the house bore a strong resemblance to their fingerprints, but it was hard to say whose.

Mor Pla said if a ghost or spirit was to turn up, he would feel it, but as there was no black magic involved they would have to discuss the matter in terms of science.

"The easiest way to prevent it happening is to install CCTV. The ghost has no way of knowing about the camera," he said.

The family have not said if they intend pursuing their ghostly print claims.