USAid's Donald Steinberg explains why he is focused on gender equality

The phenomenon of Facebook users changing their profile pictures to a red equal sign last week might have left some people puzzled, but it has a simple enough explanation. The picture that went viral was derived from the Human Rights Campaign's symbol for equality, which is being used in support of two cases concerning same-sex marriage now before the US Supreme Court. 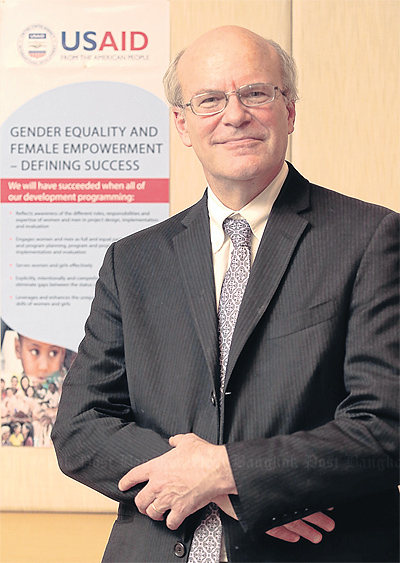 The lesbian, gay, bisexual and transgender (LGBT) movement for equal rights has come a long way in different corners of the world where LGBT populations remain marginalised. Here in Thailand, human rights activists and LGBT advocates are planning to make history by drafting a bill for that would allow same-sex civil partnerships. Something is about to change.

Last week, USAid deputy administrator Donald Steinberg paid a visit to Thailand as a part of his mission in the region. Part of his agenda is to reach out to local LGBT activists to learn more about the community and how USAid can lend its support.

Steinberg sat down with the Bangkok Post for an exclusive interview dedicated to LGBT issues.

What is the purpose of your visit to the region?

I'm here in Bangkok as part of a number of countries in East Asia, starting in Indonesia, where there was a conference on Millennium Development Goals, which are the priorities. Then, I had a chance to visit Bangladesh to look at the programmes there.

My visit here in Thailand is designed in part to highlight the work that we're doing in the region with the countries ranging from China, Vietnam, Myanmar, Cambodia and works here in Thailand to support reconciliation. Perhaps the most significant [are] the works we're doing on a regional basis to promote women's equality, as well as support for the LGBT community.

When did the US government recognise LGBT issues as part of its foreign policy?

I think there were two key events in that regard. The first was the speech by [then] secretary of state Hillary Clinton at the UN Commission on Human Rights in which she declared quite clearly that LGBT rights are human rights and that the US is supportive of eliminating discrimination and ensuring the political and economic participation of LGBT communities in their societies.

Then, most significantly, US President Barack Obama, in December of 2011, issued a memorandum which told all of the foreign policies of agencies of our government to aggressively promote the rights of all individuals including the LGBT community without regard to sexual orientation or gender identity.

USAid took that very seriously and we had already taken a number of steps, including urging all of our partners not to discriminate on the basis of gender identity or orientation. But, we went further and we issued a number of internal orders that expanded our support for LGBT populations.

Equally importantly, we are launching here in Bangkok what we call the "Being LGBT in Asia" project. And what it is, in the first instance, is a comprehensive research initiative focusing on six countries _ China, Cambodia, Indonesia, Thailand, Vietnam and the Philippines _ to reach out to LGBT communities to find out From them what their priorities are or what kinds of discrimination they face and how we can most support their efforts to join the political, economic and social mainstreams of their countries.

Are there any LGBT-related projects that USAid supports right now?

Yes, we have projects around the world in the LGBT area. In Southeast Asia, they are designed to support organisations that are stepping forward to demand their rights. We generally believe that our support should be following the "we" of the LGBT community in countries themselves because we have the expression that we use at USAid that "nothing about them without them". So, we need to have programmes that support these communities as they agitate themselves for rights.

In addition, we have programmes with local security forces to make sure that they do not discriminate against the LGBT community. We support individuals who are inappropriately charged with crimes or are being subjected to sexual-based violence because of heir gender identity, and a variety of programmes, especially in the area of global heath. Also, a number of programmes we do are supported by the president's initiative to fight HIV/Aids and those programmes work increasingly in with men who have sex with men.

Have you ever met with local activists and learned about problems from them?

Yes, we just met with them actually. We met with five LGBT activists here. Whenever I travel, I meet with them in their countries, because, in fact, they are the ones who know best what the priorities of their countries are, the prejudices and discrimination that they face. But most importantly, they can tell us how we can support their efforts.

Perhaps, I can tell you a quick story. My father was a schoolmaster in Los Angeles. This was 25 years ago. He was the first schoolmaster in his state to put together a programme to advise the LGBT students on their situation. It was a counselling effort that was called "Project 10", because they recognise that about 10% of any population is probably LGBT. When I called my father to support his effort, I said: "Thank you for standing up for the human rights of these people."

And he said: "Well, human rights is one thing and that's one motivation. But, the truth is that the students who are LGBT and aren't comfortable with it are likely to be bullied, to drop out of school or to use drugs. So, it's my job as an educator to help these individuals to be comfortable with who they are."

He said: "How can we teach them history and physics and calculus and not help them with a situation that is going to dominate the rest of their lives?"

Many LGBT communities seem to look up to the US and now there is active movement for LGBT rights over there. What is your view on the changes in US society?

I think we have entered an era in the US where we're asking ourselves in many cases why just a few years ago we could not allow people to serve openly in the military, and we had the policy of "Don't ask, don't tell". I think people saw that in the last election; state after state moved forward in the area of gay marriage.

I think if you look at the difference on the basis of age, the vast majority of young people don't even understand why this prejudice exists. And I think we're in a transition period. In the case of the president himself, he came out last year in support of gay marriage and he said "my thoughts have gone through a transition in the space". And that's very significant because it wasn't where he was previously and I think we, as a society, are asking the right questions and we're asking them without the same kind of anger or accusations as in the past.

I think each individual coming out will have his or her own view on it. One of the things that we've seen more and more is that family members are influencing behaviour, including that of senior politicians. We're seeing members of our political class, who previously opposed full rights for LGBT, now seeing their cousins or children or other relatives [come out], now it's coming home in a way that it hadn't before.

Do I really discriminate against my son based on the fact that he has a different sexual orientation than I do? Once we get to that point when people internalise it, then it's only one step to say: "Of course, we don't do that."

USAid promotes development in foreign countries. How are LGBT rights important to development?

We can talk about LGBT issues from a rights-based approach, but we also need to talk about it as a development-based question, because, in order for a society to move forward, they have to draw on the contribution of 100% of their population. We have now learned that development is a whole-of-society exercise.

So, for any society to say that we will not use your talent, based upon the fact that you're a woman, or you have disability, or that you are young or an ethnic minority or that you are LGBT is condemning your society to lower growth, less prosperity, and increased poverty.

So, we as an aid agency have an interest in seeing an inclusive approach towards development that includes LGBT people as beneficiary programmes but also as contributors, planners and implementers of these programmes.

We can't afford to exclude anybody in this exercise. I think you may be aware that President Obama, a month ago, said publicly that the US will work with its allies and friends around the world to eliminate poverty within 20 years.

If we're going to do that, we can't afford to say to 10% of the population considered to be LGBT that "You don't count! You can't contribute!" We can't afford that.