From childhood and through-out her working career, Atchara Juicharern has always had within her a passion for teaching. She has always loved talking to a large audience, but unlike being a stand-up comedian, she not only wanted to entertain but to inform, and have the audience learn something educational and useful in an enjoyable way. So while it's not what she planned, it probably shouldn't come as a complete surprise that she founded and currently manages AcComm & Image International, a leadership and staff development consulting company. 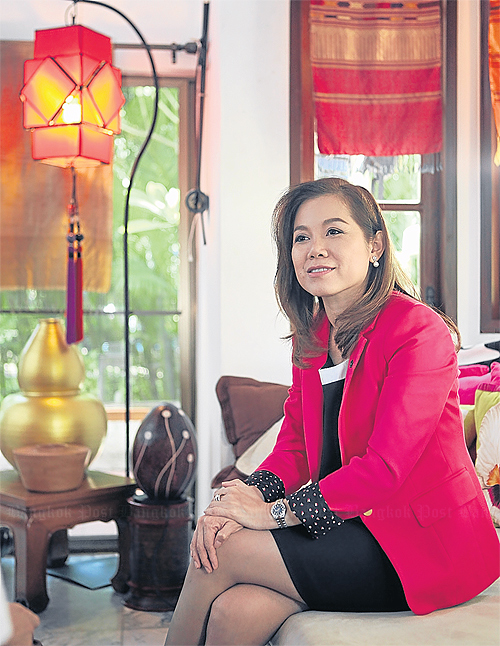 Becoming a leadership and organisational development coach has not been an easy path; it has taken years to build up experience and credibility in the profession. She studied teaching English and German in university, and this academic background has proven very useful in what she does now.

"Although teaching corporate leaders takes a totally different approach from teaching students, the common base between them essentially is knowing how to develop people."

Who inspired you the passion to teach?

I suppose the many good teachers that I have had so far in my life. Teaching is fun because you are sharing knowledge with others, while learning yourself. Also, being a teacher forces you to become a better person. This is because to win your students' respect, you have to be a good example to them.

Why did you decide to become a flight attendant, and what was that experience like?

I was actually waiting for the right time to apply for my master's degree when the opportunity with Northwest Airlines came up. I just wanted to travel and to have work experience. And it was six years later when I become the airline's flight attendant trainer that I enjoyed my work the most.

When I didn't have to train new staff, I got back to work as a flight attendant with crew who were actually my students. I was having the time of my life, the combination of travelling and teaching was so much fun that I actually thought at the time that I would do this forever.

After being a trainer for the airline for a few years, I was promoted to the airline's base manager in Thailand. Although I didn't get to fly any more, management work was also fun. I was responsible for everything _ the company development, the business strategy, staff training and management, in-flight services and a lot more.

What was the biggest turning point in your life?

After seven years of working as a base manager, I felt like there were a lot of staff I had trained who could take my place. I just thought I would go back to being just a flight attendant like I used to, but the company wouldn't allow that.

They allowed me three years' leave to think things through and I could do whatever I wanted in the meantime. While I focused my time on my PhD in Development Administration at Nida, I also did part-time leadership coaching for various organisations and companies, using the experience from working for the airline. After a year or so, I had gained a lot more clients so I decided to quit my job and set up my own company.

What process did you go through to set up your company?

To build the credibility of the company's coaching programme, I bought a licenced communication training course called Think On Your Feet which focuses on how to arrange your information and thoughts systematically and communicate well even when under pressure. Later I also got a licence as a Thailand Official Affiliate of Dr Marshall Goldsmith's leadership training and development, which focuses on working on leaders' common defects such as anger, goal-obsession, ego, favouritism, etc.

From your coaching experience, what are the common drawbacks found in Thai organisations?

Communication and the concept of leadership are the two main problems I have observed. Nowadays, with technology and social media, it's becoming more difficult for people to not just process information and to also communicate with other people in an easily comprehensible manner.

In the area of leadership, most people have the wrong impression that good management and good leadership are the same thing when they are two totally different matters.

Good management is all about achieving goals while good leadership is more about creating comfort and happiness for the employees. Another problem I have seen very often is how some leaders in Thai organisations tend to be too kind and over-protective towards their employees. The right balance has to be found, otherwise working efficiency will be damaged.

On a personal front, what do you do to unwind and get your mind off work?

I read. But then again it's books and research on leadership and organisational development. Learning new things and sharing what I have learned with people who have the same interests makes me happy. If I don't read, I'll just sit and relax in my garden at home, or travel to other provinces or other countries.