After the rush
Life
Social & Lifestyle

For Lampang locals, gold panning is a good income-generating activity outside busy farming periods, but as ever, resources are waning

Standing in the knee-deep brook that branches out from the Wang River, Kallaya Yamdeelert shovelled wet sand into a wooden pan that looked like an upside-down Vietnamese hat. Submerged slightly below the surface, the pan was shaken left and right while Kallaya swept the sand away layer by layer. 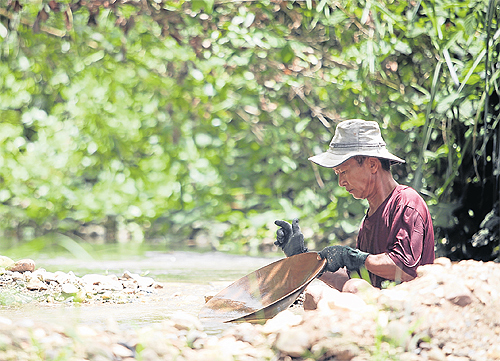 "Gold is heavy, so it naturally works its way down to the bottom of the pan," she said while attempting to get rid of the unwanted mud, rocks and sand. Her wooden pan _ known among locals as a wan _ was almost empty, so her eager eyes were sweeping over it for something that glittered.

"It's impossible to tell whether we will go home with some gold or we will go home empty-handed. It all depends on luck," said the 40-year-old local of Wang Nua district of Lampang province.

But Kallaya was apparently lucky that day. What was left at the very bottom of her pan were tiny bits of gold _ some smaller than 1mm in diameter. Pan after pan, by the end of the day, Kallaya had gold which, she said, was worth 200 to 300 baht _ necessary income for not just herself, but also her family.

Gold panning is a process that requires great patience and stamina. You can stand in the water for hours trying to extract gold from sand and get nothing. But the locals consider gold panning their hobby _ something they do when they are free from the rigours of farming or from their routine agricultural work.

According to chief of the Wang Kaew tambon administration organisation, Panom Jenjad, gold panning is an activity that has been carried out by the locals for several generations. Tambon Wang Kaew in Wang Nua district is well known among not just people in the neighbourhood, but also those from other provinces as a gold-panning site.

"Geographically speaking, tambon Wang Kaew is located at the border of Lampang province, adjacent to the Wang River," explained Panom. "The area is also [situated near] the Phi Pan Nam mountain range, which extends across Chiang Rai, Phayao and Lampang. Earth crust displacement in the old times brought about the influx of underground gold that mainly originated from the Phi Pan Nam range. When underground rainwater from the mountain flows down and branches out into brooks, gold comes with it." 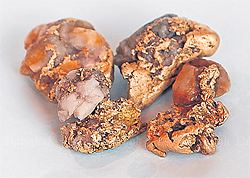 One of these gold nuggets—nearly 1cm in diameter— can be sold for more than 10,000 baht.

From word of mouth and media news coverage, gold panning in this area became a sudden hit a few years ago. People from around the country made their way to Lampang, and to deal with the rush, the Federation of Thai Industries' Lampang chapter decided to issue gold-panning licences, with the first batch going out in October 2011. First on the list of criteria for the application is that gold panners be locals.

''The problem first arose in summer 2010 when the provincial authority provided us with a budget to dredge the Wang River as flood prevention protocol,'' recalled Panom. ''After the river was dug up, gold panning became a lot easier. Gold could easily be spotted in the sand and each panner then earned several thousand baht per day.

''When people from other areas learned about this, they came hoping to get rich. Some of them used a sucking machine so that they could get a large amount of sand at a time. This stirred up arguments between locals and outsiders and is the reason a gold-panning licence needs to be issued and preserved only for local residents.''

Gold-panning licences, added chief of the Wang Kaew tambon administration organisation, are issued and renewed on a yearly basis. The application is free, and applicants only need to submit a copy of their identification card and house registration to verify their permanent residence in the neighbourhood. The licence states clearly that the use of machines in the panning process is strictly prohibited.

''The licence, in a way, helps safeguard local wisdom [of panning by hand], which has been passed down from our ancestors for generations,'' Panom added.

Kallaya said gold panning is only carried out in summer and winter when the water levels in the Wang River are not too high. Locals start at about 9am and quit at about 5pm, and most of them sell to middlemen who visit the area especially to buy the gold. Some sell to goldsmiths in Lampang city in the hopes of getting a better deal, as it can be sold at about 1,200-1,500 baht per gramme, depending on market price.

''I usually sell to a middleman once every two to three days,'' said Kallaya, who usually earns her living as a farmer. ''Last year alone, my income from gold panning was over 10,000 baht. These days I only get a maximum of 300 baht a day, but it's enough to put food on the table. Unfortunately, the amount of underground gold becomes smaller and smaller every day because gold panning has been done here for years. I think I need to find new spots if I want to earn more.''

Despite there being less gold than before, the chief of the Wang Kaew tambon administration organisation assured that panning creates no adverse impact on the environment.

''The entire process involves no chemical use. Nor does it harm aquatic animals. It's just local people digging up sand. But if outsiders come in and use technology to take advantage of nature, that's another story,'' he said

And Panom does not believe gold panning will become any more popular than it is already.

''Gold panning is like spinning the Wheel of Fortune,'' said Panom. ''You never know whether or not there will be gold in your pan. On some lucky days, you might earn several thousand baht, while on others you might get nothing. And I don't think this activity will become anything more than what it currently is because local people have set their own rules and they do not do it all year round. Gold panning has been our ancestors' wisdom and will continue to be treated that way.''

Flash in the pan: Step by step 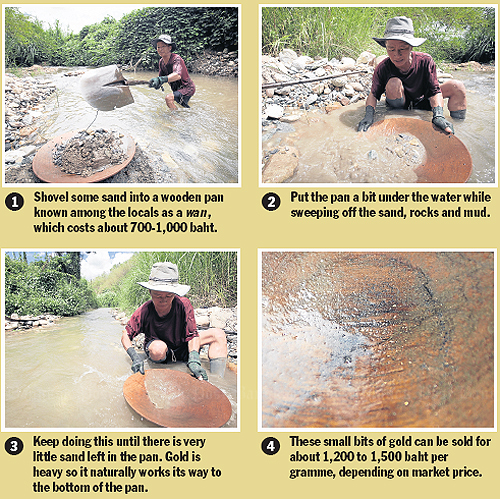