Imagine Bangkok was blanketed with snow instead of whistle-blowing protesters. Democracy Monument has four frosted peaks, tuk tuks have snow ploughs attached to the front (and not just to run people over) and the Chao Phraya River has frozen over so everyone's skating to work. 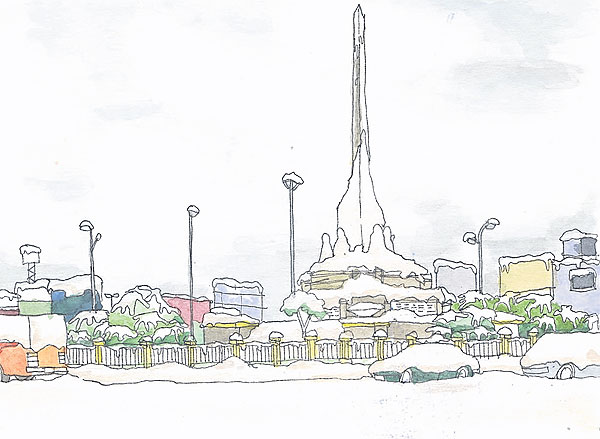 With political temperatures and hot heads seemingly on the rise, you could argue Bangkok needs to take a chill pill. Luckily, Tim Cornwall thought of it first.

He has imagined how different Bangkok might look like if the city suffered a severe cold snap _ tourists couldn't walk around in shorts and singlets, for one thing, and the women in Soi Cowboy would have to put a few more layers on _ and commissioned artists to execute his vision. And he has done it all under the name Bangkok Snow Removal.

Mr Cornwall _ a stout, bespectacled man with impeccably ironed trousers and short, greying hair _ doesn't at first glance look like the sort of person who would have such a far-out idea. Over lunch at a Japanese joint he drops a glop of curry on his heavily starched white shirt and wipes it off right away while reminiscing about financial ventures in Tokyo. He talks about all the kinds of hobbies that make him seem like another one of those white-collar professionals who seem to have been pressed out of the same mould. He's part of Toastmasters (distinguished in District 80, he boasts) and he does charity golfing for the Rotary Club. His doctorate is in adult education and he teaches short business courses.

But Mr Cornwall has also spent nearly two decades envisaging what Bangkok would look like covered in snow. He takes mental freeze-frames of landmarks across the city and, since he can't draw or paint himself, commissions artists to convey his vision of a tropical metropolis blanketed in white. Bangkokians are wrapped in jackets and gloves, and in his favourite piece they plow out parking spaces at the Ekamai Bus Terminal as a purple dusk envelops the sky. 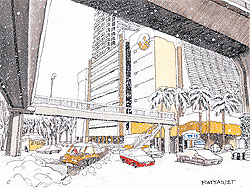 Four years ago, the Ottawa native had a booze-fuelled brain storm with a group of friends. He tried to hatch an original business idea that could succeed in Bangkok. ''We said, hey, what's the one sector where there's no competition? Snow removal,'' Mr Cornwall said in jest. ''It's one of those crazy things you do _ an idea when you're drunk.''

After that, he set up a website called Bangkok Snow Removal to push his creative vision, and maybe even capitalise.

He went out with a former business associate to find an artist to convey his visions in postcards that he could sell both to companies and interested individuals. ''The idea was off the wall,'' Mr Cornwall quipped.

But on the steps of Mo Chit skytrain station, they found a talented watercolour painter named Rattawit. Mr Cornwall was taken aback by his talent and hired him right away for the new business.

''This is a guy who had never seen snow before,'' Mr Cornwall said. ''But I just liked his work _ I told him what I wanted and he was really good, he really understood what I wanted. I gave him the ideas and he did it.''

Mr Cornwall frequented the city's myriad networking events and the postcards produced for Bangkok Snow Removal gained popularity, to his surprise. Some of the work painted by Rattawit has since been featured by CNNGo and local magazines.

''I had this journalist in Chiang Mai call me once, and she didn't really understand it was a joke,'' Mr Cornwall said.

''I told her we use the Japanese method of snow removal. She said, 'What's that?' and I said it's using hot water _ but hey, they gave me an article.'' 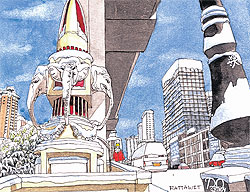 But then Mr Cornwall ''met a very attractive French woman, Caroline Seiller,'' who wanted to be commissioned on the project. She had one mandate as the two decided to move into producing art for calendars _ to make her winter water colours ''very much Tintin style''.

Seiller is a visual artist specialising in murals; she's been based in Bangkok for five years.

''One of the first commissions I had here was those surrealistic Tintin style illustrations about Bangkok in the snow,'' Seiller said.

''Cornwall had the surprising idea to commission me these illustrations.''

Today, Seiller and Mr Cornwall are still amicable, but Seiller has been doing less work for Bangkok Snow Removal. Mr Cornwall is commissioning other artists as the products offered by Bangkok Snow Removal evolve into different mediums. He's lately experimented with line drawings of Bangkok in the snow: The artists only uses seven, nine or 11 line strokes, numbers that correspond to Buddhist numerology.

For the new year, Mr Cornwall produced a calendar of Bangkok in the four seasons, painted by Seiller. He said he was inspired to commission the paintings from a short stint in Europe, where he was exposed to four-seasons series of trees and buildings.

His next big plan: the Bangkok Winter Olympics.

Perhaps the giant escalator at Terminal 21 will provide the ski jump. Just don't ask where the skeet shooting's going to take place. 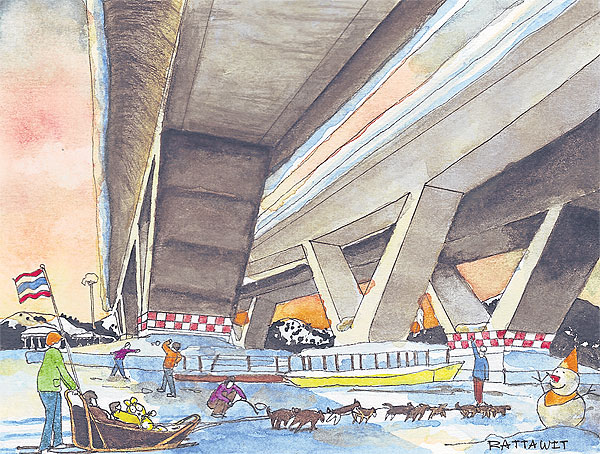 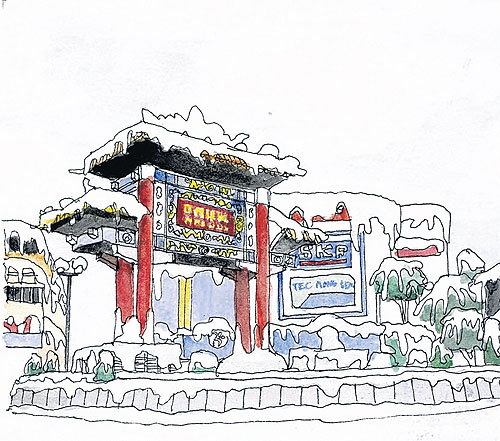 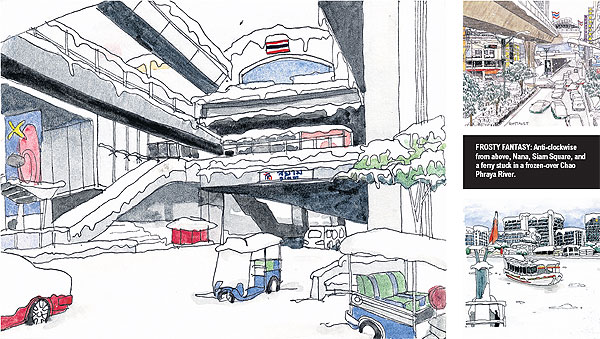