After 57 years, Lumpini Boxing Stadium on Rama IV closed its doors ahead of its relocation to the Ram Intra area

‘This will all be bulldozed,” said Maj Gen Surakai Chattumart, director of the Army Welfare Department and Lumpini stadium master. “It will become complete emptiness — I guess it does feel a bit like seeing your home destroyed. It’s like losing something, but if it’s for the better, it’s something we should all accept.”

Last Friday, Lumpini Boxing Stadium on Rama IV hung up its gloves by holding its last fights, and yesterday the new incarnation of the stadium at Ram Intra Road, which is still called Lumpini, opened . The legendary landmark on Rama IV — as well as the people and livelihoods that revolve around it — will soon perish and become a distant memory.

The rumble of the tin-roofed Lumpini Boxing Stadium we’ve heard for 57 years was established by the First Infantry Division of the Royal Guard in 1956 and managed by the Army Welfare Department from 1979 onward. Because the stadium is on a year-by-year contract, the time is ripe for relocation, as the Crown Property Bureau, which owns the land the stadium is located, has bigger plans for maximising the location’s business potential. The Bureau’s request for the stadium to move has resulted in the much-loved institution relocating to a new home in the Ram Intra area, near the Royal Thai Army Sport Development Center.

Although Thai-boxing has been around for centuries — think of Nai Khanom Tom in the Ayutthaya era — it initially remained a skill people learned for self-defence. People did not think of boxing as a career, showing off their skills only at organised events. It was only when King Rama IV appointed boxing as a national sport that the pastime became more widespread, as boxing stages such as Suan Kularb, Taa Chang, Taa Prachan, Pattanakarn, Thon Buri, Sri Ayudhya, Ratchadamnoen and Lumpini came into existence. The stadiums at Ratchadamnoen and Lumpini, in fact, are the only two left from those eras — the others folded long ago. Since Lumpini officially opened its doors on Dec 8, 1956, the stadium has accumulated a rich history through various fights and as a stage for well-known prizefighters. Flyweight legend Pone Kingpetch fought for the world title there in 1960 (he lost, but later claimed the title in another fight); sensational Chartchai Chionoi fought there in 1970 to a 20,000-strong crowd, which included HM the King; bantamweight champion Khaosai Galaxy fought one of his most memorable fights in the stadium against Kongthoranee Payakaroon in the late 1980s and contemporary pugilists such as Samart Payakaroon and Somluck Khamsing, who went on to box at the Olympics in the 1990s, also made their names at Lumpini.

The last fight on Friday was between Sanchai PK Sanchai Muay Thai Gym and Petchboonchoo Bor Plaboonchoo. Sanchai, 33, said he first fought at Lumpini many years ago when he wasn’t yet 20-years-old, and earned just over 10,000 baht. Like many muay Thai boxers around the country, he considers fighting at Lumpini to be the height of his career.

But it’s not just life in the ring that will be remembered. Vendors and boxing equipment shops in the area will have to leave, as everything will be bulldozed away. Beer, a salesperson in the Top King equipment store, does worry that foreign tourists, who made up much of the audience at Lumpini, will not follow them to the new location. 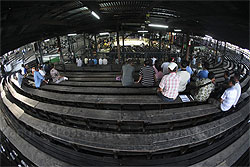 “The traffic is so bad out there, and there’s just so much more for tourists to do here in the city centre,” she said. “Tourists can easily pop by Silom or wherever, and much goes on at night in this area. Luckily, there is store space for us to continue selling at the new location, but if people aren’t as interested in going, it would affect the business.”

Long-time food vendors who need only to set up a table to sell are no less concerned. Pitsanu, a 58-year-old vendor who has sold bachang (stuffed steamed rice) at Lumpini Stadium for the past 41 years is quite stressed, as half of his earnings will disappear.

“I can still sell at Ratchadamnoen, but I’m afraid it won’t be enough for me to survive,” he said.

Pitsanu sold around 300-500 packs of bachang every match night at Lumpini. Although he doesn’t mind following the crowds to Ram Intra, the problem lies in the fact that there is no selling space for him at the new venue.

“I’ve been here ever since I sold bachang for 12 baht a piece until now, [when] I sell for 40 baht. I have a lot of memories of this place and will surely miss it.”

Though the stadium has over half a decade of history under its belt, the structure itself hasn’t changed much over the years, according to Jakapong Noojitawiwat, 61, a spectator who attended the stadium’s farewell event.

“It pretty much looks exactly the same as when I was a young man. Not much has developed except for a shift from wooden structures to cement. Other than that, the rickety and humid ambiance that seems to entice Westerners so is all still intact.”

When a pair of amateur boxers climbed into the ring on Friday to kick off the evening with an international match, their diminutive stature barely brought their heads over the fourth rope.

“Before there used to be only three ropes, not four,” Jakapong said. “But over the years, boxers fell off the stage more as fights become more fiery and farang boxers are also very tall, so another rope was added.”

Indeed, the Lumpini stadium has a rough, old-school charm, as well as a more accessible location, which made it a must-see spectacle for tourists. Drawing up to 300 foreigners on popular nights, as opposed to the 70 or so Ratchadamnoen attracts, Lumpini is considered a boxing mecca for Westerners, who flocked to the stadium to watch boxing legends, both Thai and international.

Although die-hard boxing fan Sukjit Muankaew, 59, came to the farewell event alone, he occasionally got up to greet different people he spotted in the stadium — friends he has made over decades of coming to Lumpini every Tuesday, Friday and Saturday. Feeling rather dismayed that his favourite stadium was closing, he admitted he was sure to get lonely.

“On days I’m not here I’m at Ratchadamnoen, but I like to watch matches here most,” he said. “The new stadium is in a traffic-heavy area and harder to get to, but I think I’ll still go anyway.”

Asked if watching boxing every evening all these years has ever bored him, he answered no, adding with a chuckle: “I come here to earn money.”

One reason fans like Sukjit enjoy Lumpini, besides its well-chosen matches and fair judging, is its safe betting environment — it’s a fact that gambling and games are inseparable.

“People here all know and trust each other. so if you’ve come to con, your face will definitely be remembered. Around here, we’re quite reluctant to bet with people we’ve never seen before anyway.”

Last Friday, tourists were quick to file into their 3,000 baht ringside seats early to capture everything on their cameras as the evening commenced. Like Jakapong, they probably enjoyed watching the boxers oil up and warm up before their match began.

“I think farang like it because our sport has manners,” Jakapong said. “Our boxers hug and wai to say sorry at the end of each game, which is not something they are accustomed to seeing.”

No less can be said to describe the stadium and sport that has become not only a beautiful culture, but a hub that has affected people’s lives.

“Whether it’s promoters, boxers or media, everyone started here with little experience and grew to become recognised and successful. Boxers who fight in the ring face wins and losses because it’s a competition, but out of the ring, they are friends, and some love each other a lot. This is the benefit of boxing and of this stadium,” Maj Gen Surakai said.

Occupying a space of six rai with a seating capacity of 8,000, the new Lumpini Boxing Stadium at Ram Intra KM2 boasts high-tech and modern facilities built to support the Asean merger in 2015. Maj Gen Surakai Chattumart, director of the Army Welfare Department and Lumpini stadium master, explains that the new venue uses the best equipment and top notch systems, aiming to keep the stadium modern and competent for the next 30-50 years.

"We want the new stadium to be the pride of Thai people," he says. "The lights, sights and sounds are to be on par with those in Vegas. Of course, we aren't there yet, but we want to work our way there to be as close as possible."

Air-conditioning will be a noticeable improvement — the old one has none — as the stadium aims for international standards, also providing stately toilets and handicapped accessibility. Along with an extensive parking lot which can hold 300 cars, 30 tour buses and 200-300 motorcycles, food and equipment shops will create a well-rounded visit.

"Ram Intra is becoming very lively, as townhouses around there are already filling up with businesses preparing to serve visitors," says Maj Gen Surakai. "We're getting a very warm welcome and we're glad that schools around there are interested in visiting. We'll be inviting students for field trips and activities soon when things settle."

You can look forward to finding the same trademarks Lumpini boasted at the new venue, namely interesting matches, famous promoters and fair judging.

"Knowledgeable fans can easily spot bad judging, whether on screen or in real life. Bad judging could destroy the industry and we would never want that to happen. We don't want to destroy the art," ensures the stadium master.

Other than that, you can also look forward to the digital Hall of Fame, where visitors can learn about the history of boxers and the stadium. Due to limited space, moving pictures will take the place of portraits and statues.

During the first month, free shuttle buses from Lumpini to Ram Intra will be available from 3pm. An official will also be in the area to assist tourists, and signs with maps and telephone numbers will be posted. 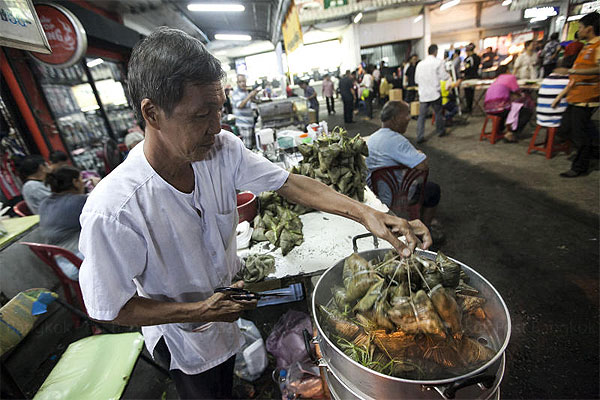 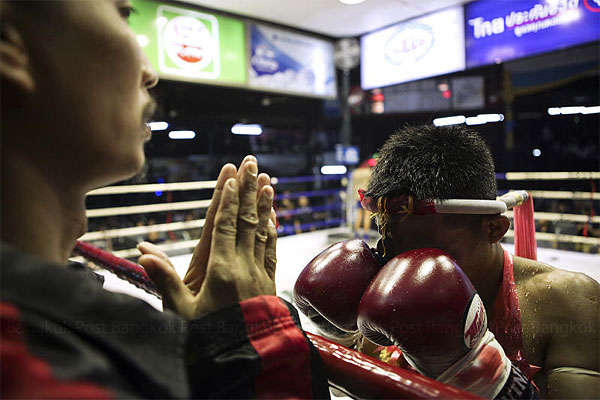