A golden opportunity for change

Everything that glitters is gold, but not for villagers at Ban Na Nong Bong, who live at the edge of a gold mine in Loei province. Since Thung Kham arrived to extract gold in 2003, villagers have complained that the company is poisoning its water source and farmland and harming their health. 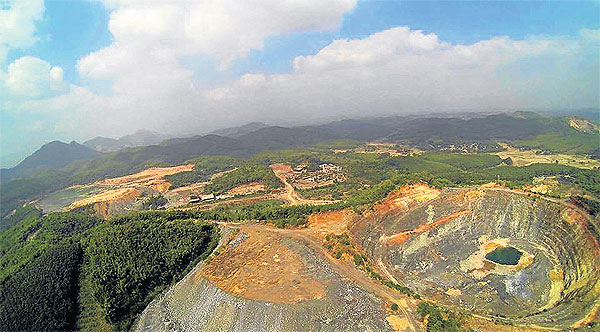 Later, the Ministry of Health and Loei provincial hospitals warned villagers not to consume water or aquatic animals from two public streams and their artesian wells in the area after pollution tests found traces of heavy metals and chemical substances, including cyanide. The company was fined for causing pollution. In October 2012, villagers believe a waste disposal pool leaked into a natural creek which was used as a source of water and food.

The case reflects a major dilemma between business and community interests. The villagers, protesting against environmental damage, blocked public roads to pressure the company. Meanwhile, the mining company recently sued 22 villagers for over 270 million baht.

On the night of May 15, over a hundred armed, masked men raided the community, holding villagers hostage and beating them before letting trucks move minerals from the mine. The company publicly denied links with the attack. 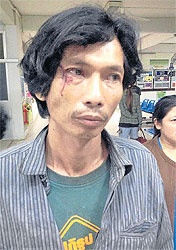 Suraphan Roojichaiyawat, or “Mai”, is a villager who has led the protests against gold mining activities. On the night of the raid, someone pointed a gun at his head and he was beaten. Last week he talked to Life about his experiences and the need to protect his village.

You are one of 22 villagers sued by the company in a 270 million baht lawsuit.

I cannot pay that liability, even if I sold all my property and land. So I place my hope and faith in the court. We will see what their hearts are made of.

Thailand is not a good place for environmental activists. How do you deal with threats?

When I was held hostage on the night of May 15, I thought that I was going to die. But I also thought they might spare my life because there is a lot of land for gold mining. If protesting villagers were shot dead, the state might cancel future concessions. As for fear, when you have fought for something for so long and have tolerated injustice for years, you are able to get over it.

Why do villagers protest against the gold mine? Do you think you are anti-development?

Let me make it clear that our protesting campaign is protected by the 2007 constitution. But essentially, resistance came from the inability and failure of gold mine operators to solve the problems that have been ongoing for years. Thung Kham sued us for a staggering amount of liability. How society looks at the economic aspects, the health and life of villagers who need to shoulder the environmental impact, is the most important. It was a pure gut reaction to erect the barricade to obstruct the road. But the wall we built to block the road is not violent; it is a symbol of our dignity.

What can society gain from your protest?

Needless to say, development projects like gold mines need to use technology that can impact health and the environment. Our protest will remind society that this problem remains and it is time for the state to check whether mining companies or other development projects are equipped with environmentally friendly technology. In a larger context, policymakers and society need to look at the real economic benefit of mining in Thailand. The state gets only a small revenue from it, a small amount compared to the price of gold, which has increased manyfold in the past few decades. Society and the state need to look at how the tourism industry is affected, too. Loei province is a popular destination, second to Chiang Mai in terms of tourism sites in the northern region of Thailand. Will polluting mines destroy this?

Do you think the society pays attention to your problem?

No. Middle class people often look at natural resources, minerals and energy as local issues. Yet they also look at the problem from the capital-centric, controlling mindset, that resources in provincial areas must be developed in order to serve the country. For them, the country is Bangkok. People in the city see resources but not the faces of the small people living in mine areas.

Do you feel the gap between the middle class and grassroots?

Educated people in big cities often talk and use big words about politics, famous politicians and their democratic ideologies. But they hardly pay attention to real-life cases of human rights violations. They talk the talk, but do no see when real violations of rights happen. For villagers, pollution violates the constitution. But that is not a political issue for the middle class in Thai society.

What are the villager’s demands?

Stop the mining operation. Our village is just the first project. The state still has a lot of land containing gold and it is becoming national policy to give concessions to mine operators. There is clear evidence of pollution and there are reports of law violations. My question is whether or not the state will let these activities and policies continue without a review?

What do you suggest for the country if Thailand continues allowing mining operations in the future?

There should be a separate fund for the state to clean up the environment. In our case, it is interesting to think about who will foot the bill for cleaning up. So far, state hospitals have come to draw blood from us for testing and used our taxpayer money to cover the expense. Again, I return to the same question. How much money does the state get from gold mine operators and how much does it need to pay to solve environmental and health problems for villagers? Is it worth it in a business sense? Well, if I am an investor, it might be the best investment. 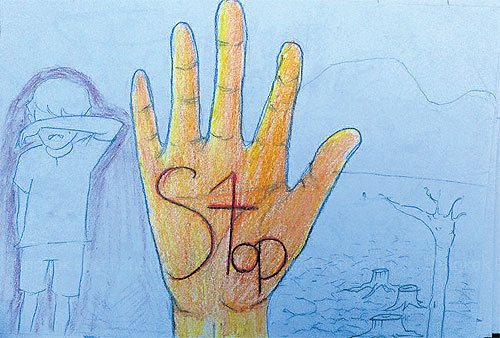 An anti-mining image painted by a student in Ban Na Nong Bong.