The deep roots of phak boong

The morning glory-like vine grows practically everywhere, but undergoes a transformation in the kitchen

The morning glory-like vine called phak boong might be the most commonplace of vegetables, cheap and so plentiful that you can find some kinds growing as weeds practically everywhere, but when brought into the kitchen of a good cook it can undergo a countless number of miraculous changes. It is indigenous to tropical Asian countries like Southern China, Laos, Myanmar, Vietnam, Cambodia, Indonesia, Malaysia and Thailand, and has held its own against many invasive plants that have come into the region over the years, unchanged and unhybridised. 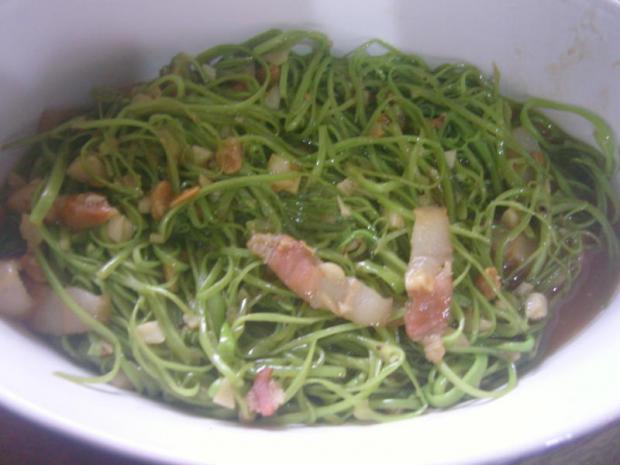 All its glory: Fried 'phak boong' stems, an old favourite in a new guise.

Phak boong has deep roots in Thai traditional culture, and there have been references to it for centuries in music and dance. It has a long history as a part of Thai daily life as an ingredient in a long list of dishes, a repertoire that is constantly growing and changing. What's more, the vine is believed to have medicinal properties like reducing the level of sugar in the blood, improving the eyesight and memory, and treating headache, fatigue, swollen gums (the fresh vine is pounded with salt and kept in the mouth for a short time), and more.

Among the appearances that phak boong makes in old Thai music and dance is a song called Tao Kin Phak Boong (The Turtle Eats Phak Boong) that dates from the Ayutthaya period. It is played as the last piece on a programme, farewell music, and its performance has continued on into the present. All Thai musicians must know how to play it.

Back in the days when rice farmers in the Central Plains depended on natural water flowing out from rivers and canals to irrigate fields, there would be annual flooding during the rainy season. The variety of rice grown then was able to thrive during the floods, growing higher to stay above the water, no matter how deep it became.

Two other plants, grass and phak boong, were also able to keep pace with the rising water. Farmers considered them to be bothersome because they caused problems at harvest time, and pulled them out. But both plants were useful as feed for the water buffalo that were kept in stalls above the water level near the house, so they were collected for household use instead of being discarded. The best time to get them was in the evening when the sun was not hot. Farmers would go out in boats and pile the uprooted plants near the bow. 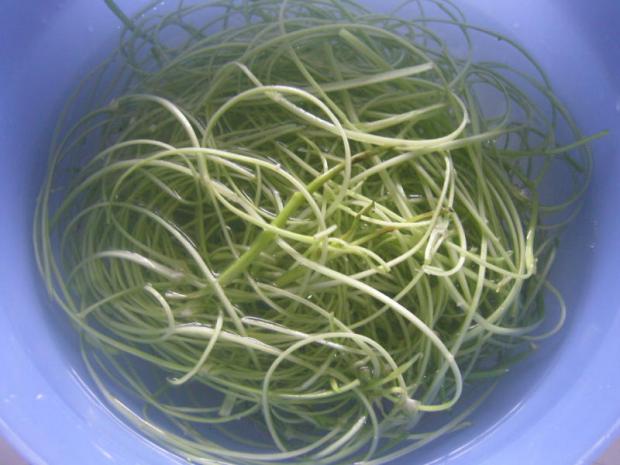 To save time they would take food for the evening meal along with them to eat aboard the boat. They would moor the boat under a shady tree and take out the simple food they had brought, usually a nam phrik pounded from dried chillies, shallots, garlic, and kapi flavoured with lime juice, nam plaa and palm sugar. It had a thick, sticky consistency and was the original of the sauce called nam phrik loang ruea (loang ruea means to board a boat). In addition to the nam phrik there might be a dried and grilled snakehead fish and some kaeng som (a soup-like dish with a sour-sweet-slight spicy taste).

The vegetable that went best with the nam phrik was the tender shoots of the phak boong plants that were being collected. This kind of meal evokes a picturesque atmosphere today and was healthy as well, but the way of life in which it had a part is long gone. The environment has changed and the fields are no longer flooded on a regular basis. But nam phrik loang ruea has survived, and it still tastes wonderful with phak boong shoots.

Phak boong can be cultivated, too. Households fronting on rivers or canals can grow it on square bamboo frames, with the plants inside the square enclosure. The more shoots that are cut for the kitchen, the more new ones appear, and besides having the plant itself to eat, farmers can catch the fish that like to live in the water under them.

This type of phak boong is known as phak boong Thai, and is only grown in water. A second type, phak boong Jeen, comes from China. It has smaller, slenderer stems and is cultivated in fields.

There is a third variety that grows wild and likes to grow in fields or gardens among the other plants. It has small, brown stems, and only the tender shoots can be eaten. In Isan it is so much a part of the diet that it can't be missing from a day's meals. 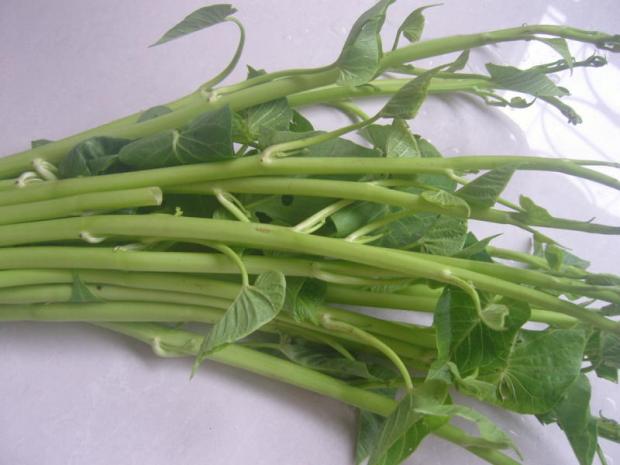 Versatile: 'Phak boong' being prepared, above, and tied into bunches for sale, below.

A great many dishes can be made with phak boong. The phak boong Thai type is suitable for making kaeng som phak boong, kaeng khua (a kind of kaeng phet), and the salad-like yam phak boong. It also goes well in noodle dishes like yen ta fo and kui tio ruea nam khon.

The stir-fries called phat phak boong can only be made with phak boong Jeen. The popular one called phak boong fai daeng or fai look thuam krata is an important item on khao tom, or rice shop menus, and is a big hit with Western tour groups. Tours going to Sukhothai or Si Satchanalai will usually spend a night at Phitsanulok to eat this dish and watch its fiery and spectacular preparation at a khao tom restaurant on the bank of the Ping River.

Recently, phat phak boong has developed a new variant in a form that uses only the stems. It is crunchier than the old version, but to make it you need a stem-cutting utensil that comes from Vietnam. It cuts the stems into long, thin strands without leaves. The dish has to be made with Thai phak boong rather than the Chinese type, because the stems are bigger. The crispness comes from the preparation technique of placing the stems in cold water after they have been cut. The hard stems become crisp when fried. The extra effort required to make phat phak boong this way is rewarded by the higher price that can be charged to eager customers.

Phak boong may not be the most elegant or exotic of vegetables, but in the hands of a good cook it can be transformed into a whole repertoire of culinary marvels, one that continues to grow. n