On the front, online

From a boy nostalgic for China, to a self-educated media lone ranger, Sa-nguan Khumrungroj exemplifies the age of citizen journalism in the terrain of both political and foreign affairs.

While at the age of 60, many might be enjoying good food, leisurely travel, gardening, watching TV and caring for grandchildren, Sa-nguan can only tick a few boxes on that checklist. Instead, he's on the ground where the headlines take place and remains a devoted footsoldier reporting for his own Facebook page "Nguan News Agency for Free". 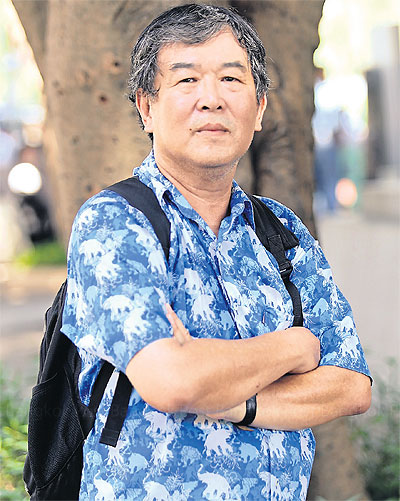 Though his followers are only around 2,000, they are quality fans — from members of the royals to working and retired ambassadors, activists (domestic and exiled), scholars, media personalities and students.

Before the old man started working for himself, he stacked almost 40 years of experience in the field as a translator, reporter, correspondent, columnist, freelancer, commentator, lecturer and mentor to junior reporters. His lifelong coverage of Indochina, East Asia, Asean and the Korean Peninsula for a few dozen media outlets in Hong Kong, Singapore, Japan, as well as The Nation and the Bangkok Post has made him as rich source of diplomatic and regional news.

"I never dreamed of becoming a journalist," said Sa-nguan, "But I'm from a poor family who doesn't have a luxury of choices."  Sa-nguan — his Chinese name, Zhenting Liu — was born to a Taechiew family in Yaowarat. His mother was born in Thailand but his father came from China. Sa-nguan confessed that he was once a very conservative racist who was not interested in Thai language during the childhood.

After spending his teenage years in Taiwan, at 20, Sa-nguan was offered a chance at a Chinese newspaper Sirinakorn (Jinghua Ribao) to translate Thai news into Chinese. This is when he began covering political news and since then, his life has been in the thick of the news circle until now.

In 1984, he got a job as a correspondent for a Singaporean media outlet Lianhe Zaobao, as he was covering the Vietnamese occupation of Cambodia — the first chance for him to open up the news frontier. He then moved around to report for several media outlets, the longest stint including Japans' Fuji TV and Sankei Shimbun.

"I'm happier writing for the Thai and Chinese media as I feel freer to express myself and supply them with exclusives," said Sa-nguan who was known as hia ("big brother").

During his active years covering Asean, he often beat other reporters with exclusives and copies of communiqués that weren't available to the press. Some countries denied his reports, but then some of his exclusives, such as Myanmar's inclusion into Asean and Sri Lanka's competition with Thailand in vying for UN secretary-general post, proved to be ahead of the pack.

Although loved and hated by diplomatic friends, Sa-nguan was made an adviser on Korean and Chinese affairs from 1995-1997. His in-depth knowledge and instinct to understand the psyche of nations behind the iron curtains was sought after by local government officials.

Among his most memorable — but not always pleasant — experiences included his coverage on North Korean hostage incidents, when the foreign minister was Surin Pitsuwan; he also got an exclusive tip-off about an accident involving a car transporting an abducted senior North Korean diplomat and his family. It was a scoop, but Sa-nguan was also extorted by the police sources for his report.

A Singaporean Chinese-language paper also sent him to Myanmar to cover the 1988 crackdown on student-led protest. He bitterly remembers that the Thai embassy denied him refuge, but he finally ducked his head inside the US embassy in Yangon.

A year later, Sa-nguan was invited by Guangzhou Tourism Department to visit China. There, he turned on his newshound instinct and instead reported on the Tiananmen Square protest. His prize was a Chinese visa ban for two years.

His gung-ho style has also made him some enemies in the higher circle; his blunt political and diplomatic comments has cost him friendships, especially during the polarising domestic politics of the past decade.

As years pass however, and after dedicating his skills to reporting on Facebook, the value of his coverage is now much appreciated. At a time when most news media look and sound the same, his readers enjoy his use of personal anecdotes and an authentic voice to narrate and comment on daily goings-on in Thailand.

"We'd better not compare the media then and now, you'll just be disappointed," said Sa-nguan. "Back in those days, media entrepreneurs were not afraid to face bankruptcy and/or jail since they devoted themselves to journalism. The relationship between reporters and editors were also closer and more in solidarity," he said.

Of course, the advantage of the modern-day media was technology and the profusion of English.

But journalists, Sa-guan said, don't put the legwork into digging for details and background, especially on television. "Many don't do their homework, before sitting down in front of the cameras. Foreign news reports still rely on international agencies instead of their own analysis," said Sa-nguan.

From a person who wrote news on a piece of paper before faxing it in, Sa-guan has had to learn how to type Chinese, English and Thais on the computer screen and small handheld gadgets for his Facebook reports.

Although the technology has changed, the gist of journalism, he said, remains the same. And if he has any lessons to pass on, it's that reporters must work on issues close to their heart, establish a long-term partnership with news sources, and never forget the rule of check and balance.

As a citizen journalist and an old hand, he always get tips from "friends" — sometimes in the deep circle — who don't want to talk directly to the mainstream media.

"It's a pity that Thailand was once a vibrant media and civil society platform, but now we have lost that status. Malaysia and Singapore are similar, perhaps Cambodia and Vietnam are setting bold examples in journalism now," said Sa-nguan, truly a pioneer of Thailand's self-styled citizen journalist at work today.