Where filmmaking is a joy
Life
Social & Lifestyle

Where filmmaking is a joy

When GTH made headlines last December by announcing that it would forever drop the curtain, movie lovers throughout the nation fell into collective mourning for a film house famed for both mainstream hits and cult-favourites, such as Hello Stranger and the billion-baht-grossing Pee Mak.

Read beyond the headlines, though, and fans will understand that it isn’t much more than a name-change and a shuffling of the company’s partners. The “T” of GTH, Tai Entertainment, has left to do its own thing, but the partnership between GMM Grammy and Hub Ho Hin continues.

“The old people don’t feel like much has changed,” said Jina Osothsilp, the co-founder of GDH 559, whose name is fashioned from the fanciful concept of “gross domestic happiness”, as well as being inaugurated on Jan 5 in the Thai year of 2559, and for having 59 shareholders in the company. “Name-changes are normal. What’s most important is content doesn’t change.”

In fact, Jina, one of the women who helped build the now-defunct GTH to the success it quickly became, genuinely laughs off the notion of it supposedly shutting down. Business will commence as usual, and they will continue to do the things they do best. This will mean a romantic-drama in September starring Chantavit “Ter” Dhanasevi and sweet-faced Nittha “Mew” Jirayungyurn. 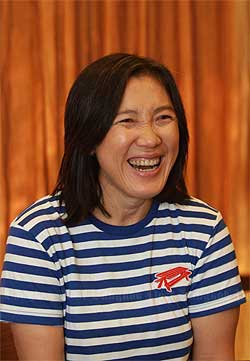 For all the stupendous commercial success this production house has garnered since its sleeper hit Fan Chan (My Girl), it comes as a surprise when Jina reveals that her company never begins a project with numeric goals, such as that a movie must bring in at least 100 million baht.

“We’ve found out that we need a good story and a good script,” the 50-year-old said. “For us, the job of moviemaking doesn’t mean make the most money, but creating good work so it can be accepted and liked by the largest possible number of people. In this business, the main money still comes from the audience, so we have a duty to reach out to as many people as we can.”

Fan Chan was a phenomenon when released in 2003 — not only for being the top domestic film of the year, waking the industry from its doldrums, but for showing that Thai movies can in fact be a full-time, stable occupation.

“We wanted the Thai movie industry to grow, and for Thais to have good movies to watch,” Jina recalled. “We also wanted moviemaking to be a full-time profession. This means you have to approach it as an occupation, which is completely different from someone who has dreams of making a movie, may make one and then makes another one only when they have money again. Self-sufficiency and success in Thai films means being able to feed the people who work in movies.”

Before the next, obvious question was even completely uttered, Jina blurted out: “Creativity comes first.” Despite a rollicking roster of creative-driven content, their systematic and level-headed way of working shows they aren’t all about feel-good. “Creativity must go all the way first. If it’s too much, then we can trim it down, but we never start with putting a frame down first. Here, creativity leads everything, but it’s on a base of sensible finances. I let it go if it’s feasible, but if I need to draw a line, the team respects that, too. It’s really important to have trust in one another.”

The post-Fan Chan era was a rickety run with hits and misses that did not get back on track until Bangkok Traffic Love Story ushered in a golden age for the house from 2009 onwards. Still, Jina said there is no ready-made formula for success, even after all the hits — as well as the flops — they have produced. Partly, it’s because they are not just creating the same kind of movies they’ve already created, but they also insist on scaling new heights to keep their reels fresh. And yet, the success of a movie rests on factors that simply can’t be controlled.

“Sometimes we do a good job but the success doesn’t come,” Jina explained. “It’s natural, though, because content relies on the mood of the person watching it. Sometimes, it has to do with the timing of its release, because of other movies simultaneously showing in the theatre. We try hard on all our movies, but the success is not the same for all of them.

“When we don’t get good feedback, we need to think back and figure out why. We need to reflect on why it didn’t become a hit and figure out how to solve that, not just blame the audience for not getting it. Otherwise, we will never understand what was our fault.”

Despite being a top exec working with a product more likely to be a flop than a hit, Jina enthusiastically described her job as cheerleader, psychiatrist and, in negotiations, boxing referee. Jina said that golf and making time for chit-chat in the office may be what keeps her from looking her age. It's apparent that the feel-good movies churned out at GTH are a mirror reflecting the top management who run the place in a happy, stress-free environment.

“I admit that we’re happy people who don’t need much formality and choose to not work under pressure,” said the Chulalongkorn Communication Arts alumni. “If you see us work, you’ll see that we’re a feel-good crowd, and that’s reflected in the work we do. We do horror and suspense, too, though — it’s just that we won’t go completely dark because we don’t have anyone like that. Creating content is about re-creating that person’s experience.

“You won’t be very rich,” she said of working in this industry, “but it’s a career you can survive on. It makes the mind happy because it’s an occupation where your customers are the audience. Only when they are happy will they pay you money. It’s not a career where they give you money first and you have to make something for them. Here, we can choose what we want to do first and this is a happiness for people working in the creative field — no one is forcing you to do anything.”