A scene from the stage show Fundamental, marking the Oct 6, 1976, massacre at Thammasat University. (Photo by Wipat Lertpureewong)

A theatrical performance, Fundamental, which lends its physical movements and body language to reconstruct Thailand's hushed-up history of the bloody military crackdown on pro-democracy students on Oct 6, 1976 has attracted the regime's attention.

Teerawat Mulvilai, artistic director of the experimental theatre troupe B-Floor Theare, has been warned that soldiers would on Wednesday monitor this B-Floor Theatre's show which commemorates the 40th anniversary of the massacre. It is being staged at the Bangkok Art and Culture Centre until Sunday.

It's expected that the military will focus attention on the show marking one of the darkest chapters of Thai history, in which protesters and students who gathered at Thammasat University were beaten, shot, hung and burnt to death during protests against the return of military dictator Thanom Kittikachorn.

Kaona Pongpipat is a writer for the Life section, Bangkok Post.

The regime's need to keep an eye on such a commemoration demonstrates why we have not really embarked on a proper process of reconciliation since the long-forgotten massacre.

The performance is inspired by a horrendous image by Pulitzer Prize-winning American photographer Neal Ulevich featuring a student hung under a tamarind tree, with his lifeless torso about to be hit with a chair to the satisfaction, laughter even, of onlookers.

Teerawat’s show features a storm of impassioned and cryptic physical movements by an ensemble of 13 performers who stage a sequence of movements bursting with incoherent fragments that makes it hard to remember how the performance went. It begins with two performers mopping an empty stage when suddenly the rest of the cast start rising from the ground as if corpses restored to life.

Soon, they start running around, boisterously flaunting movements in spirited synchronisation. Then, they divide themselves into two groups: one apparently the hunters while the others are the victims who are hiding in corners. And suddenly, they gather as one group again, huddling tightly together in extreme fear and retreating from an invisible enemy.

Then, one performer is singled out, being cornered and bullied by the rest of the cast. Then another performer is put up against the wall and strangled to death. The most haunting elements of the show are the performers' constant gasps for air and sudden bursts of laughter at others' calamity. It resembles Ulevich's photo of bystanders laughing at the dead man.

It is no coincidence that performances like B-Floor Theatre's have always been at the forefront when it comes to speaking about sensitive political issues. In a climate of paranoia and censorship, elusively abstract and non-verbal gestures are the only way to go. This is not the first time B-Floor Theatre has done it. Teerawat has touched on the subject before in his 2012 Oxygen or 2013 Typhoon (The Remains).

Fundamental reflects a reality of elusive, abstract and never-out-in-the open Thai society, when it comes to engaging in public dialogue about sensitive political topics. In the lead-up to the 40th anniversary of the massacre next week, gruesome black-and-white images from the event, including that award-winning photo, have been repeatedly shared online.

This part of Thai history has become just a seasonal commemorative event. Early October sees an emergence of the same old ghastly photos with painful, yet almost always vague, captions as if this chapter of history were non-existent. For the rest of the year, this tragedy, as portrayed by Ulevich, is abridged and condensed and just vaguely ominous to those unaware. 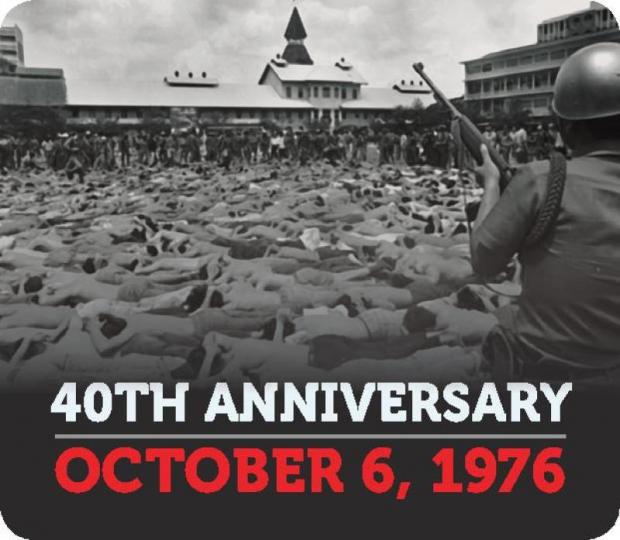 "We never forget," is often the phrase that goes with these tragic images. But the question is how long can one go on remembering when no dialogue can ever be truly verbal, and when the event was never discussed openly in the public and properly addressed in the mainstream.

This is not to say that Fundamental isn't a good show. If Fundamental were staged again, let's say in 40 years' time, one just wonders whether its audiences will be able to interpret its hidden meaning. They may not know that the corpses that were restored to life at the beginning of the performance are meant to resemble arguably more than 100 massacred students.

Will there come a time when the audiences no longer realise that those hunters in the show portray the Thai security forces and far-right paramilitaries who attacked the protesters on that day? The audiences may just think that the gasps for air are just pure fiction and will not believe that people actually laughed when they saw a fellow Thai being hung and beaten to death.

When thinking about nations dealing with their difficult past, we usually look at Germany or, closer to home, Cambodia. Our country, in fact, has not dealt with this vaguely memorialised chapter of our history. True, this is not yet the time for justice. But at the very least, the dead and their relatives deserve more than just symbols and abstraction.

Writer for the Life section

Kaona Pongpipat is a writer for the Life section of the Bangkok Post.

The transfer of government critic Dr Supat Hasuwannakit to a southern border town has sparked controversy, with some alleging it is being done due to his outspoken role with the Rural Doctor Society.