Authorities are giving weight to the theory that anti-regime elements were behind the deadly coordinated bombings and arson attacks that rocked the South and the resort city of Hua Hin from Thursday to Friday.

This could be the work of opponents of the regime or those who wanted to discredit the National Council for Peace and Order (NCPO), which seems to have gained more popularity based on last Sunday's referendum on the military-backed draft charter, in which most people voted in favour of the constitution, according to the source.

Officials placed terrorism as the second possible cause, the source said, noting there are reports of Islamic State (IS) activities in Malaysia, so this cannot be ruled out.

A source at the Information and Communication Technology (ICT) Ministry said the SIM cards in the mobile phones used to detonate the bombs were from Malaysia.

National police chief Chakthip Chaijinda said the attacks took place in the provinces where the majority voted in favour of the draft charter and it was likely that those attacks were aimed at damaging the government's handling of politics, tourism and the economy.

Based on the investigation, the incidents were linked to people who have different political views and may be connected to the violence in the deep South due to the similar use of improvised explosive devices, Pol Gen Chakthip said.

Gen Prawit vowed to bring those responsible for the attacks to justice, saying: "I will have the perpetrators arrested. We succeeded in making arrests every time, and will also do so [this time]."

The deputy premier ruled out a spread of violence from the far South as a cause of the attacks, saying: "This motive can be discarded. I confirm this is not the case."

He said he believed all the attacks were the work of the same group.

Responding to concerns that the explosions took place only days after the referendum on Sunday, Gen Prawit said politics could be one cause, but he could not confirm it.

Prime Minister Prayut Chan-o-cha refused to pinpoint the motive behind the attack, saying the investigation is still under way.

"I want you to think what happened before and after the referendum. Why did the incidents take place when the country is getting better and moving towards improving its economy and tourism. I must ask, who are the ones who do not want these things to happen? Who are they? Find them for me," said Gen Prayut.

Meanwhile, Panitan Wattanayagorn, an adviser to Gen Prawit on security affairs, said both domestic and foreign intelligence warned of possible violence before the referendum.

Thai authorities deployed officials to keep tabs on suspects and nothing bad had happened, except some violence in the far South.

He said it was clear there is an attempt to create a situation that would hurt the government and the country. Although the political situation has eased after the plebiscite, there are still people who want to trigger violence for certain benefits, he said.

Speaking of the deadly explosions in Hua Hin, Maj Gen Danai Kritmethawee, chief of the Thanarat Camp's Infantry Centre in Prachuap Khiri Khan, said the investigation found the bombs were planted two days before they went off.

The assembly of the bombs, however, was different from that in the far South, he said.

A source in the 4th Region army said the attacks were the work of political groups connected to a political base in the South. An order was made to carry out attacks in the popular tourist destinations as well as key business zones in the South and in Bangkok. Warnings have been made to security agencies, the source said.

Meanwhile, politicians have denounced the attacks.

In a post on her Facebook page, former prime minister Yingluck Shinawatra said the series of attacks was inhumane.

She denounced those who were behind the bombings which she said not only caused loss of life but also damaged people's confidence in the country.

She wanted to extend her condolences to the relatives of the dead and injured and give encouragement to the officials on duty to bring back normality and arrest the perpetrators quickly. 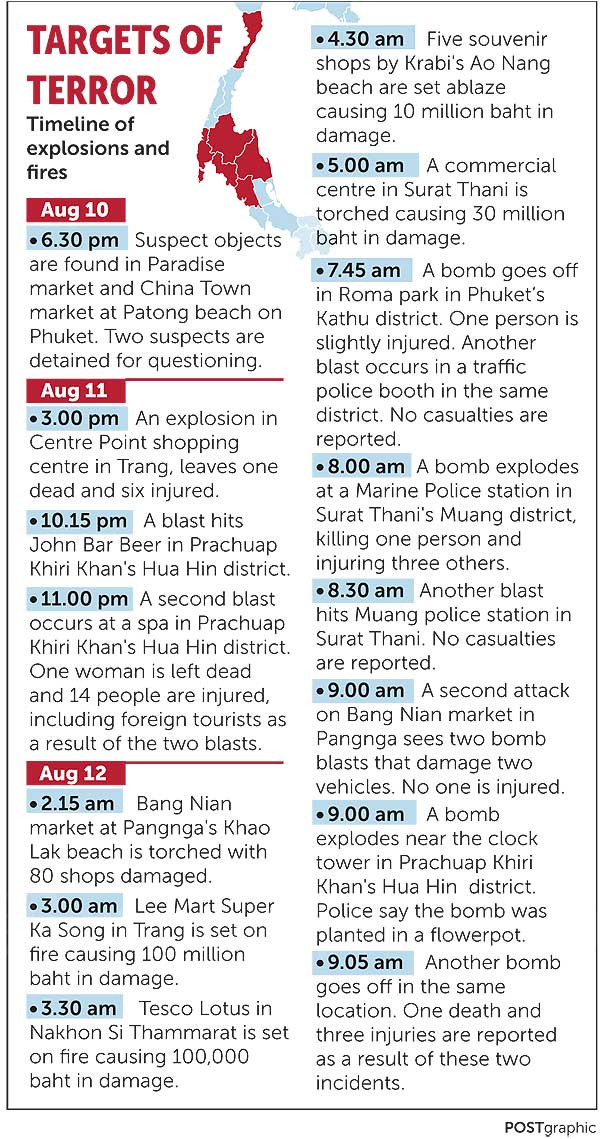