Police say conditions back to normal

Phetkasem Road leading to the Hua Hin market was closed on Friday night following bombings on Thursday and Friday that killed two people in the resort town. (Photo by Pattanapong Hirunard)

Police say conditions have returned to normal following a series of deadly bomb blasts, with a Trang political activist the first person confirmed to be detained.

They also said preliminary evidence suggested the attacks on Thursday and Friday were not the escalation of the secessionist campaign in the three southernmost provinces.

There were unconfirmed reports earlier that two suspects had been detained for questioning following the incidents that killed four people and injured 35, including at least 10 foreigners, in five provinces: Hua Hin, Phuket, Phangnga, Trang and Surat Thani.

However, the only detention police would confirm was that of a 67-year-old political activist and former constitution writer in the southern province of Trang.

Soldiers from the Fourth Army apprehended Prapas Rojanapithak at his house in tambon Khok Muang in Muang district while he was watching TV on Saturday morning.

The officers took him to Muang district police station and later to the Thao Thepkasattri Thao Srisunthorn military camp in Nakhon Si Thammarat, where he is being questioned. They were acting under a Section 44 order of the interim constitution, which gives the military power to summon, arrest or detain suspects in a range of security-related cases.

Seized from his house were books related to politics and some other documents, authorities said. They want to question Mr Prapas about a possible link to the bombing that killed one person in Trang on Thursday and arson attacks on commercial properties elsewhere in the South. 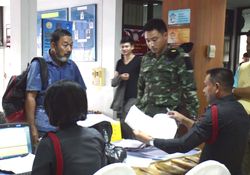 Political activist Prapas Rojanapithak (in blue shirt), 67, talks to soldiers at Trang police station before being taken to a military camp in Nakhon Si Thammarat for questioning. (Photo by Methee Muangkaew)

Mr Prapas was a member of the committee that drafted the 2007 constitution following the military coup that overthrew former premier Thaksin Shinawatra. He was also member of the Trang chapter of the yellow-shirted People's Alliance for Democracy, and belongs to other non-government organisations including the Trang Rubber Planters Network.

Despite his apparent yellow-shirt leanings, Mr Prapas joined 90 other southern academics and activists in signing a statement condemning the May 22, 2014 coup that overthrew the government of Thaksin's sister, Yingluck Shinawatra.

Mr Prapas insisted he had not been involved in the Trang bombing, saying he was at home at time of the incident and that witnesses could verify that. He was sick at the time and was planning to see a doctor but the clinic was closed, he added.

The activist said soldiers seized his mobile phone, an iPad, bank accounts, books related to politics, a diary and his ID card before taking him to the police station. However, no charges have been pressed against him.

Mr Prapas admitted he had exchanged views on politics with friends who shared the same ideology, but had never taken part in any political movement.

He also insisted he had no link with the red-shirts’ United Front for Democracy against Dictatorship (UDD).

"We have collected DNA samples from the scenes and the results should be known and sent to investigators responsible for each crime scene on Sunday. We hope to seek arrest warrants soon," he said.

Based on the existing evidence, the violence was not a major expansion of the secessionist campaign that has been concentrated in Yala, Pattani and Narathiwat and rarely targets foreigners, he said.

Senior officials of the military government also believe the attacks were political in nature and intended to discredit the regime.

Government spokesman Sansern Kaewkamnerd suggested those behind the blasts could be people who have "lost benefits" -- code for followers of Thaksin -- because of last Sunday's referendum, in which 61% of voters approved a new constitution that will entrench the power of the miliutary for years to come.

Pol Gen Pongsapat said the types of bombs and the detonation methods used this week were similar and investigators believed the perpetrators were all from the same group, working for a mastermind who provided them with the explosives.

"We believe the perpetrators are still in the country," he said.

He said police chief Pol Gen Chakthip Chaijinda had vowed that this time the network of the perpetrators would be completely uprooted. "People will finally know who was behind these acts aimed at destroying the country."

The deputy police chief added that there had been no reports suggesting that more incidents might take place.

"We assure the people they no longer need to worry and can travel and return home," he said. "Immigration police reported there were no signs of threats at any entry points and strict inspections are in place. There has been nothing unusual."

Security has been stepped up at Suvarnabhumi Airport and a number of other high-profile public places.

Pol Lt Gen Tesa Siriwatho, the Region 8 police chief, also said on Saturday that this week's fires in Nakhon Si Thammarat, Phangnga and Krabi were clearly arson attacks by the same group of people. However, forensic officers are still pursuing further investigations into a fire in Surat Thani.

The blaze in Surat Thani on Friday morning burned down the Taveesin Plastic shophouse on Kanchanavithee Road, with damage estimated at 10 million baht.

"We're also expanding the investigation to determine whether the incidents were linked to the fire at a Surat Thani cooperative and the car bomb attack at Central Festival shopping complex in Koh Samui on April 10, 2015," he said.