The economy is expected to be barely scratched after a string of bombing and arson attacks in southern resort towns, say policymakers and economists.

The baht hit a 13-month high Monday on better-than-expected second-quarter GDP growth of 3.5%, overshadowing concerns over the incidents, but Thai shares ended down slightly.

It is not necessary to launch new measures to alleviate the impact of the attacks because tourists are sticking to their plans to visit Thailand, he said.

Deputy Prime Minister Somkid Jatusripitak said the blasts were unlikely to cause any drastic impact on the economy, instead urging the public to remain calm and not panic about the bombings.

He expects the situation to return to normal soon.

Porametee Vimolsiri, secretary general of the National Economic and Social Development Board, said the blasts were expected to have a slight impact on tourism spots and the overall economy, with the government keeping the situation under control.

He said the agency still maintained foreign visitors at 33.5 million this year, with revenue amounting to 1.7 trillion baht. 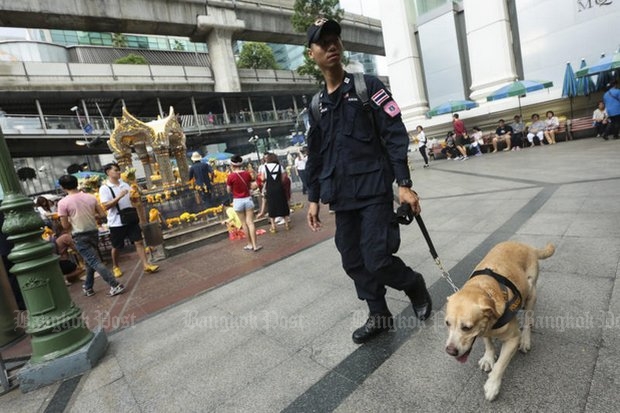 High-profile police patrols are aimed at rebuilding tourist confidence after last week's bomb blasts across the South. An officer and his dog work at the Erawan Shrine - which on Wednesday will mark the first anniversary of the terrorist bomb that killed 20 people, mostly foreigners. (Photo by Patipat Janthong)

The government has experience in crisis management and is better prepared in handling the situation than last year's blasts at Erawan shrine, he said.

"In our view, we could not say the situation has fully stabilised," said Tim Leelahaphan, an economist at Maybank Kim Eng Securities (Thailand). "Economically, however, it is not the tourist high season, while other [domestic] destinations will continue to attract tourists. Therefore, we conclude that tourism will not be severely affected."

The bombing incident in Bangkok on Aug 17 last year had a short-term impact on tourism, lasting no more than one month, Mr Tim said.

Last week's bombings in southern Thailand present a clear risk to growth outlook in the second half, said Santitarn Sathirathai, the Singapore-based head of economic research for Southeast Asia and India at Credit Suisse.

Tourism revenue accounts for 10% of GDP and contributed 2 percentage points to the 2.8% full-year GDP growth in 2015, he said.

"At this stage it is still very difficult to gauge the impact of the blasts on tourist arrivals without much clarity regarding the perpetrators and the risk of follow-up attacks," said Mr Santitarn.

"Last year's bombing at the Erawan shrine had a short-lived impact on the economy, but we are reluctant to extrapolate from that experience alone," he said.

The baht retreated in early Monday trade , tracking initial weakness in regional peers, but turned firmer to 34.60 versus the greenback -- the strongest since July last year following the release of the country's quarterly GDP.

Investors shrugged off the bombs after robust GDP for the second quarter was announced, Mr Roong said, adding that he did not expect to see the baht stronger than the resistance of 34.50 soon as the central bank would step in to curb the gains.

Thai shares also faced a wild ride yesterday, starting the day on a major sour note and heading south to the day's trough of 1,538.77 or a 13.87-point drop shortly after the bell rang.

Bargain hunting kicked in to pare early losses and helped the SET index climb back to positive territory before closing down 0.2% at 1,549.11 points.

Turnover was heavy with a value of 75.05 billion baht.

Global foreign-currency reserves are falling at the fastest pace on record, as central banks from India to the Czech Republic intervene to support their currencies.

A British executive accused of enticing people to invest in a foreign fund and refusing repayment after the contracts expired, causing 40 million baht in damage, was arrested at Suvarnabhumi airport on Thursday.