National police chief Pol Gen Chakthip Chaijinda says fugitive sect leader Dhammakaya has had a chance to surrender, but now will never be granted bail once he is arrested. (Post Today photo)

Bail will not be granted to embattled abbot Phra Dhammajayo after police arrest him, the national police chief says.

Pol Gen Chakthip Chaijinda said Tuesday the case has dragged on for months and it should come to an end with Phra Dhammajayo being prosecuted.

"Once the arrest happens, there will be no granting of bail since police gave him [Phra Dhammajayo] a chance to turn himself in [and receive bail] earlier, but he ignored it," he said.

"This case will come to an end within three months. The authorities gave him many chances and it has gone on too long," the police chief said. 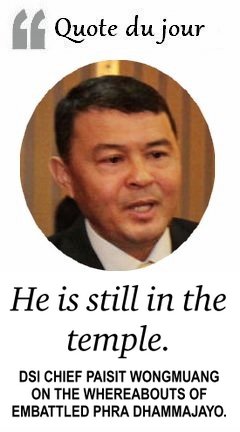 The Royal Thai Police has prepared about 1,000 officers for an operation to raid the temple and arrest the abbot after the monk failed to report to authorities by last week's deadline.

A date to apprehend the monk has not been finalised but, according to the latest meeting among officials, the National Office of Buddhism will first try to talk Phra Dhammajayo into surrendering. Negotiations are scheduled to be concluded by Saturday.

In their meeting with Buddhism officials last Friday, temple representatives demanded Phra Dhammajayo should be released on bail immediately when the former abbot turns himself in to the authorities.

The Department of Special Investigation (DSI) said earlier it had no power to grant the abbot bail as the money-laundering case is now being handled by the Office of the Attorney-General, which has authority over the bail request.

DSI director-general Paisit Wongmuang said an investigation found some of the money siphoned from the cooperative to the temple, monks and other individuals were used to buy shares on the stock market.

Meanwhile, officers at Thanyaburi police station in Pathum Thani, where Wat Dhammakaya is located, have asked Thanyaburi provincial court to issue a warrant for the arrest of the temple's acting abbot Phra Thattacheevo, for providing shelter to Phra Dhammajayo, who is now regarded as a criminal suspect.

The court is considering the request, a source said.

If Phra Dhammajayo is not in the temple, "there must be people to take responsibility", Pol Col Kritsana said.

However, he said it is too soon to say who should be deemed to be at fault. Though officers of Khlong Luang police station supervise the area where the temple is situated, Pol Col Kritsana said he could not say immediately if those officers had ignored their duties.

Supporters of Phra Dhammajayo on Tuesday continued praying at Wat Dhammakaya as guards tightened up the monitoring of people entering the temple.