Pol Lt Gen Ronnasilp Phusara, commissioner of the SBPPOC, said yesterday that officers saw the face of one perpetrator clearly from the footage.

Work is under way to review footage from other CCTV cameras near the blast scene to try to identify the attackers, he said.

He said the perpetrators were likely local insurgents and was confident all would be eventually identified.

A total of 61 people, including children, were wounded by the two blasts at the shopping centre. Three of them were in critical condition.

His Majesty the King yesterday assigned ACM Kasem Yusuk, chief of the King's secretary office, to give flowers and other items to the victims, who were being treated at Pattani Hospital in Muang district of Pattani and Songklanagarind Hospital in Songkhla's Hat Yai district.

The first bomb was planted at the entrance of the store's compound next to Nong Chik Road, said Pol Lt Col Manit Panthong, an inspector of Pattani's forensic police unit.

The other explosion was caused by a bomb in a pickup truck outside the store's main entrance, about 100 metres away from the first blast.

According to a security source, two perpetrators were seen in the pickup truck which was parked near the entrance.

Another two on a motorcycle waited for their accomplices in front of the store, the source noted.

There could also be others who acted as lookouts and mingled with people in the store, the source said, adding at least 10 people may have been involved in the attacks. 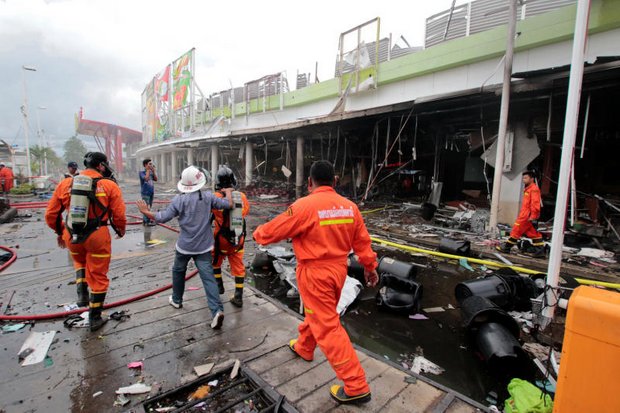 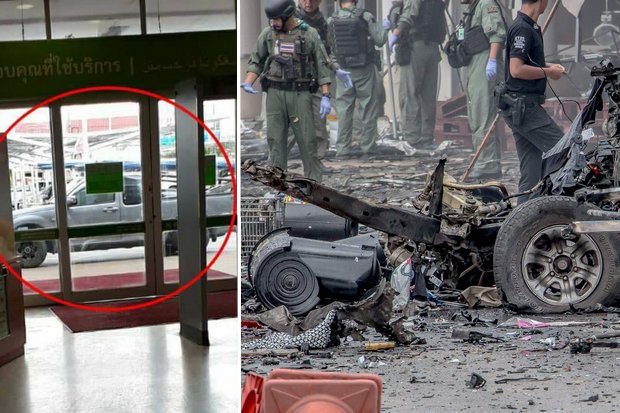 In one of the worst atrocities of the separatists' war in the deep South, attackers set off a large firecracker to create panic, then exploded a huge truck bomb at the main entrance where they expected to shoppers to be fleeing. (Photos FB/BIG-C-Pattani)

Officers are checking the identities of the four, who look similar to individuals on a database kept by the security forces, but more evidence is needed to confirm their identities, the source said.

The four are believed to be linked to two men behind car bomb attacks in Pattani last year, according to the source.

One was Abdullah Samae, who is wanted for the attack at Meeting Restaurant close to a police special force unit in Pattani's Muang district on Feb 26. Another was Harim Dolah, who was allegedly behind an attack at the Southern View Hotel in the same district on Aug 24.

Security officials have determined the pickup that contained the bomb outside the Big C Supercenter belonged to Nuson Khachornkham, who lives in Yala's Muang district. His wife earlier said her husband had driven to Pattani to sell canvas and she had been unable to contact him.

The source said another insurgent group, run by Seri Waemamu and Bukolee Lamso, may have stolen the vehicle from Mr Nuson, adding two groups may have worked together to carry out the attacks.

Officers meanwhile are on the lookout for Mr Nuson. An investigation found his mobile phone was last used in tambon Maphrao Tondiew in Pattani's Nong Chik district, the source said.

He may have been lured into selling canvas around the area before being robbed, the source noted. At press time yesterday, authorities were still unable to locate Mr Nuson.

Col Pramote Prom-in, spokesman for the Internal Security Operations Command (Isoc) Region 4's forward command, said Big C has been asked to suspend trading until June 1, pending repairs to the store and a revision of its security measures.

Maj Gen Sithi Trakulwong, assistant director of Isoc's 5th Operations Coordination Centre, said the attacks have no implications for the southern peace talks, which are moving ahead.

Another round of talks, earlier scheduled to take place this month, could be deferred as Ramadan fasting is due to commence later this month.

Meanwhile, another security source said the Pattani attacks were made at the behest of local insurgent leaders, who aim to erode public confidence in security and damage trade and investment in the area, adding they took aim at soft targets.

Intelligence suggests a group of young insurgents had just finished military-style tactical training and that the Pattani car bomb attack could have been carried out to give them more confidence in carrying out future attacks, the source said.

Attacks are likely to continue ahead of Ramadan, which starts either on May 26 or 27, the source noted.

Meanwhile, security has been beefed up in the far South following the car bomb attacks.

All vehicles entering major shopping malls in Hat Yai municipality were scanned and their drivers had their identification cards checked. (Story continues after Post Infographic)

Shop owners and business operators in the area have also been urged to report anything suspicious to officials immediately.

Meanwhile, officials at the Southern Border Provinces Administration Centre (SBPAC) yesterday visited the injured at Pattani Hospital and gave financial assistance to them.

"The offence the perpetrators committed was the abuse of innocent people," SBPAC secretary-general Supanat Siranthawineti said. "The SBPAC will provide the best care for them."

The government plans to regulate the fast-growing business of hire purchase and leasing of cars and motorcycles to maintain financial stability and protect consumers, the central bank said on Monday.