Police spokesman Kritsana Pattanacharoen said Pol Gen Chakthip has issued an order to all police units prohibiting them from demanding benefits from entrepreneurs and foreign workers who violate the law as it comes into effect.

Asked whether the law could end up being enforced after some delay, he said the police would await government guidelines and comply accordingly.

The decree aims to raise the standards of recruitment and management of labour and avoid accusations of abuse or even human trafficking by the international community.

It calls for harsher punishments against the recruitment of undocumented foreign workers.

The law contains stricter penalties for both civil and criminal wrongdoing, with fines ranging as high as 400,000-800,000 baht.

Meanwhile, the government said it respects all of the commitments it has made with other countries, adding the new law on migrant workers could include a grace period to soften the impact on the private sector.

The assurance comes amid reports Prime Minister Prayut Chan-o-cha will invoke Section 44 to put off enforcing certain clauses in the new legislation for 120 days to give employers and workers adequate time to comply.

"The prime minister wants to stress he stands by the commitments the government has made with other countries and considers the suppression of human trafficking a high priority," said Lt Gen Sansern Kaewkamnerd, the national spokesman.

"The government will not allow the law, whether it is enforced or not, to pose any obstacle," he added.

He said the migrant law remains a necessary tool to standardise management of migrant workers in the country and help it comply with international rules and win acceptance.

Lt Gen Sansern said the premier is aware of concerns raised by employers, noting such issues are likely to be dealt with this week.

But the executive decree, which took effect on June 23, has already forced more than 20,000 workers to return to neighbouring Myanmar. 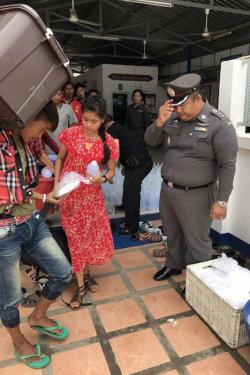 According to a report by an immigration checkpoint to the district administration in Tak's Mae Sot, a total of 21,828 migrant workers have returned to the country via Mae Sot as of Sunday morning.

The number was compiled by police at the Mae Sot immigration checkpoint since June 23. They continued to return home in droves Sunday, driving up the numbers.

"The issue should be perceived in terms of international law, such as that pertaining to human trafficking, and obligations we have with other countries. The government needs address the problems in a comprehensive manner," he said.

The National Legislative Assembly will today hold a meeting with various agencies including the Labour Ministry to discuss concerns.

Democrat deputy leader Ongart Khlampaiboon has also called on the government to hold talks with neighbouring countries to discuss ways of shortening the verification process for labourers.

Thailand has 1.3 million migrant workers who are being allowed to work temporarily without a work permit until March 31 next year. They will have to undergo a verification process before they can seek legal work permits.

"I doubt the 120-day grace period is enough to have them clear this process," he said.

"I suggest we hold talks with our neighbours to see if we can reduce it by a few steps."