A soldier inspects the scene of the raid behind a mosque in Ban Paka Harang village in Muang district, Pattani, on Wednesday. (Photo by Abdulloh Benjakat)

PATTANI - Security forces killed a suspect in the May bombing of Big C Supercentre during a raid in Muang district on Wednesday.

The shooting occurred when security forces were searching for suspects at a mosque in Ban Paka Harang village in tambon Paka Harang.

Behind the mosque, a group of about five men were resting on hammocks and bamboo beds. As the authorities approached them, they fled, and both sides then exchanged gunfire.

One man was killed instantly. He was named as Suding Mama, a 29-year-old native of Nong Chik district. Officials identified him as one of the suspects wanted under arrest warrants in the Big C Supercentre bombing on May 9.

Officials found two pistols at the scene, and planned to investigate if they had been used in any other security incidents.

They also took two local residents for interrogation about any possible connection with the suspects.

Lt Col Komet Ratanapongsai, commander of the 23rd ad hoc unit, said that local villagers told authorities that the suspects went into hiding at the mosque on Tuesday evening.

Authorities believe 15 people were behind the Big C bombing, which injured 80 people. The blast came from two cooking gas cylinders stuffed with explosives weighing about 100 kilogrammes.

The cylinders were placed on a pickup truck stolen from a canvas vendor from Yala province. The vendor was brutally murdered after the theft on the same day of the bombing. 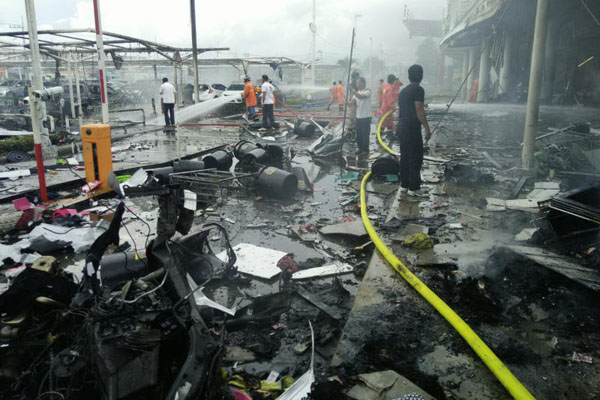 Rescue workers are responding to the car bombing at Big C Supercentre in Pattani on May 9. (Photo from a Pattani rescue team)