Officials survey the damage to a crop raided by a large herd of hungry elephants, in Nakhon Ratchasima's Soeng Sang district on Thursday. (Photo by Prasit Tangprasert)

Local officials on Thursday surveyed the damage to crops in tambon Ban Rart. Based on the extent of the  damage, they estimated the herd to be at least 20 strong. 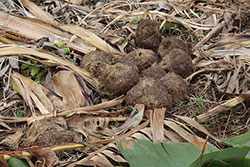 Elephant dung amid the raided crop at a farm in Soeng Sang district, Nakhon Ratchasima. (Photo by Prasit Tangprasert)

Farmers said they took turns guarding their crops, but had failed in their efforts to drive away the elephants. There were just too many, and nobody dared to anger them.

Their farms are near Thap Lan National Park, a vast area of forest. They did not know which direction the elephants would come from and this made it even harder to guard their crops.

Pimpaporn Rujinrachet, assistant chief of Ban Rart tambon administration organisation, said the elephants had come out of the forest in search of food earlier than usual this year.

Normally, they emerged only during the dry season, when food was often scarce in the park's forest.

The large herd may have depleted their natural supply of food early and turned to raiding local farmland, where their favourite crops, especially sugarcane and corn, were growing.

The TAO would send staff to make joint patrols with the local people, and hopefully keep away the raiding elephants. Help would be provided for farmers whose crops were ruined, Ms Pimpaporn said.