Regime on edge as ruling nears

City police officers check the premises of the Supreme Court's Criminal Division for Holders of Political Positions. (Photo and video by Thawatchai Khemkamnerd

Former prime minister Yingluck Shinawatra faces the prospect of 10 years behind bars or two other possible scenarios on Friday when the Supreme Court rules on whether she was guilty of dereliction of duty in her rice-pledging case.

If found guilty she could either be incarcerated or receive a suspended jail sentence. A not guilty ruling would see the case dismissed. Either result is likely to yield appeals, experts say. Police fear a prison sentence could potentially spark riots and unrest.

Ms Yingluck and public prosecutors can appeal the verdict within 30 days.

The ex-premier has been charged with failing to prevent corruption in the rice scheme, her government's flagship policy.

However, a guilty ruling would draw sympathy from the Shinawatras' huge support base in the North and Northeast and risk further ramping up Pheu Thai's popularity in its two big strongholds, experts say.

If the case is dismissed it would legitimise the party's rice policy possibly leading it to roll out a similar campaign promise ahead of next year's general election, the sources said.

Several analysts contacted by the Bangkok Post said the third scenario is the least likely to come to fruition.

Meanwhile, strong efforts have been made to whip up political pressure outside the court by trying to have the case dismissed or get a suspended sentence handed down in the name of reconciliation, the sources said.

But grassroots pressure has failed to notch up much success since the 2014 coup in persuading the military-led government to negotiate with political opponents, observers note.

The regime appears bent on rooting out key Pheu Thai figures including Ms Yingluck, who has been banned for politics for five years after she was impeached by the coup-installed National Legislative Assembly (NLA), the sources said.

Analysts say if the case is dismissed, prosecutors will immediately appeal as they have long campaigned about how the scheme incurred mammoth government losses in excess of 500 billion baht.

If she receives a jail sentence Ms Yingluck would have to appeal merely to seek bail.

Ahead of Friday's ruling, authorities have been deployed to block her more ardent supporters from massing at the court in north Bangkok to lend her moral support.

Some 24 red-shirt leaders and their allies are on a police watch list.

Earlier this week, security forces set up checkpoints on all key roads leading to the capital to screen travelers and weed out people seen as potential troublemakers as authorities fear the court could become a staging ground for political rallies regardless of the verdict.

"Some 24 people as well as leaders of the United Front for Democracy against Dictatorship [UDD] are under close watch, particularly Watana Muangsook, a key Pheu Thai Party figure," said Pol Col Olan Sukkasem, chief of the Sub-Division 3 of the Technology Crime Suppression Division (TCSD).

There has been no sign so far that supporters of the former premier have attempted to use the occasion to stir up political unrest, he added.

Acting Pheu Thai spokesman Anusorn Iamsa-ard dismissed reports that people are being mobilised to visit the court based on a hidden political agenda.

He said Ms Yingluck's supporters have turned up at 20 court hearings for the case without causing any trouble.

Key UDD figure Nattawut Saikuar echoed Mr Anusorn's sentiments. He said that as the authorities have been deployed nationwide for months to maintain stability they must have noticed there have been no moves to galvanise supporters to cause unrest at the court.

A Pheu Thai source said Ms Yingluck's fans have been contacted to travel to the court separately. Many from the northern and northeastern provinces arrived in Bangkok earlier in the week, he said.

Former Pheu Thai MPs were planning to contact her more localised support base to encourage them to support her when the case wraps up, the same source said. They were asked not to wear or bring anything of politically symbolic value, he added.

Meanwhile, Col Piyapong Klinpan, a spokesperson for the National Council for Peace and Order (NCPO), said between 2,000 and 3,000 supporters are expected to turn up tomorrow.

He confirmed there are no intelligence reports suggesting unrest is on the cards.

A security source said about 2,000 of the supporters are expected to come from Bangkok and nearby provinces including Nonthaburi, Samut Prakan, Nonthaburi and Ayutthaya. Another 1,000 are expected from the North and Northeast.

About 70% of her fans who are due to show tomorrow are female, the source noted.

Military intelligence and administrative officers in Phichit said 30 red shirts in Bang Mun Nak district are believed to have travelled independently to Bangkok for the occasion.

Another 20 will leave for the capital today, they said. 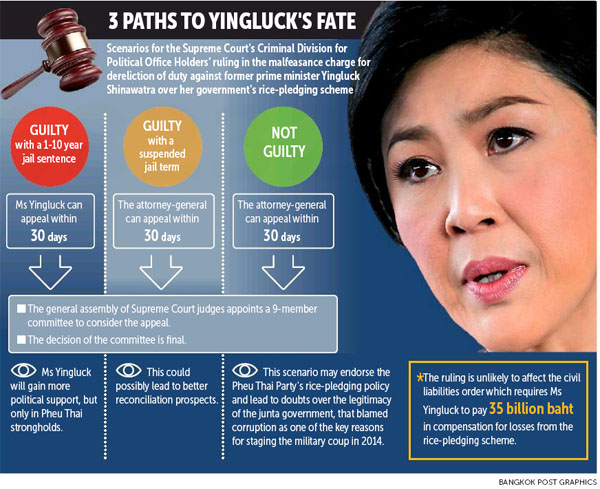