NAKHON PHANOM: Police on Monday charged seven people with perjury after they testified in court to support Jomsap Saenmuangkhot's claim that she was a scapegoat in a fatal hit-and-run case.

The former teacher would also be interrogated.

Nakhon Phanom police chief Pol Maj Gen Suwicharn Yankittikul said on Monday that police filed the charges at three stations against the seven suspects whom they believed have been hired to give false testimony.

The charges were filed at Muang Nakhon Phanom, Renu Nakhon and Na Don police stations, the jurisdiction of the crime, he said.

According to Pol Maj Gen Suwicharn, Mr Suriya, 54, was suspected of preparing false witnesses and evidence to help Ms Jomsap. Mr Sab earlier told police and the court that he, not Ms Jomsap, was driving the pickup truck when it hit and killed an elderly man on a bicycle.

Perjury was punishable by a jail term of up to three years and/or a fine of up to 60,000 baht, Pol Maj Gen Suwicharn said.

They would be initially summonsed to answer the charges and Jomsap would also be interrogated, he said.

Ms Jomsap was found guilty of recklessly driving when the pickup truck the court believed she drove struck a bicycle, killing 75-year-old Lua Pobamrung, in Nakhon Phanom's Renu Nakhon district on March 11, 2005. The Appeals Court overruled the first court's guilty ruling but the Supreme Court agreed with the first court and she was sentenced to three years and two months in prison in 2013.

Following her release by a royal pardon in April 2015, Ms Jomsap took a rare move of seeking a wrongful conviction case with the Justice Ministry in line with the 1983 Retrial of Criminal Cases Act. The ministry later agreed to help seek the retrial by using a new technology to prove Ms Jomsap's vehicle was not the one that hit and killed Lua.

However, the Supreme Court on Friday dismissed the petition. The court said it suspected there existed a network to hire people to confess to crimes they did not commit and the network had backed Ms Jomsap's claim of wrongful conviction.

Ms Jomsap stayed home in Sakon Nakhon province on Monday and declined to speak to reporters. 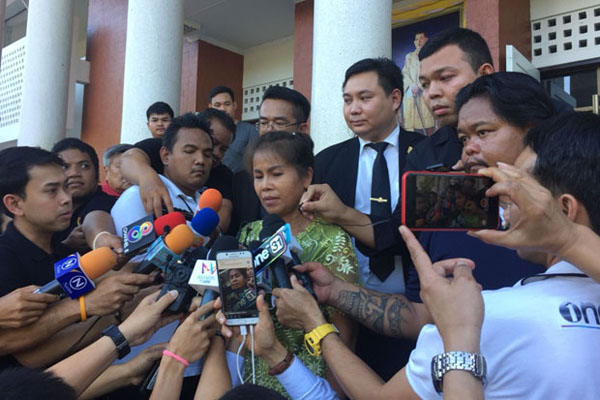 Jomsap Saenmuangkhot appears at the Nakhon Phanom provincial court on Friday to hear the Supreme Court's decision to dismiss her retrial request.