In Yala, a bomb detonated on a road in Ban Kupae Purong village of tambon Bannang Sareng about 7.30am as six defence volunteers patrolling on motorcycles were passing. The patrol was guarding teachers and students.

Security forces said the improvised explosive device was fastened to the base of a roadside tree on a road leading to Pracha Uthit School. It weighed 3-5 kilogrammes and was packed with chopped steel rods as shrapnel.

In Narathiwat, about five people opened fire with assault rifles on a defence volunteers' base on Phetkasem Highway in tambon Ta Poyoh of Yi-ngo district about 11.30pm on Wednesday.

Attackers were divided in two groups. Two of them fired at the front of the base from a motorcycle, and others attacked at the rear.

Sixteen volunteers posted there returned fire and the attackers soon left. No one was reported injured. 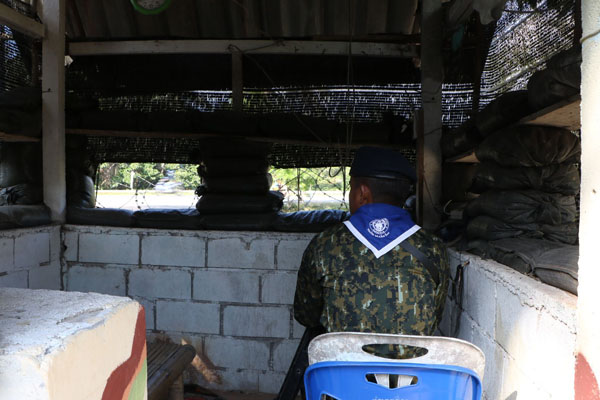 A defence volunteer mans the security checkpoint that was attacked late on Wednesday night in Yi-ngo district of Narathiwat. (Photo by Waedao Harai)