A car plunged into a roadside ditch following a crash with a pickup truck in Muang district of northeastern Kalasin province, killing a 65-year-old woman and injuring 11. (Photo by Yongyut Phupuangphet)

The accumulated death toll from road accidents has risen to 378, with 3,575 people hospitalised, over the first six days of the 7-day "dangerous period" of the Songkran festival that ends today.

Surprisingly, Monday's fatalities were lower than the the typical death toll on Thailand's roads throughout the year, according to statistics compiled by World Atlas. The organisation, which provides online information on travel, society, economics and environment, says an average of between 50 and 60 people die on Thailand's roads every day - the worst rate per head of population in the world.

The World Health Organisation, meanwhile, ranks Thailand as the second deadliest country - behind only Libya - from a survey of 180 countries.

From April 11 to 16, there were a total of 3,418 road accidents nationwide, the Road Safety Centre announced on Tuesday.

On Monday, 49 people were killed and 464 others hospitalised in 425 crashes across the country, said Lt Gen Thanet Kallapruek, director of the army’s directorate of civil affairs, citing a report from the Centre.

A total of 176,415 traffic offenders were arrested at 2,013 road checkpoints. Of that number, 49,866 people were not wearing crash helmets and 46,067 people were not carrying a driving licence. 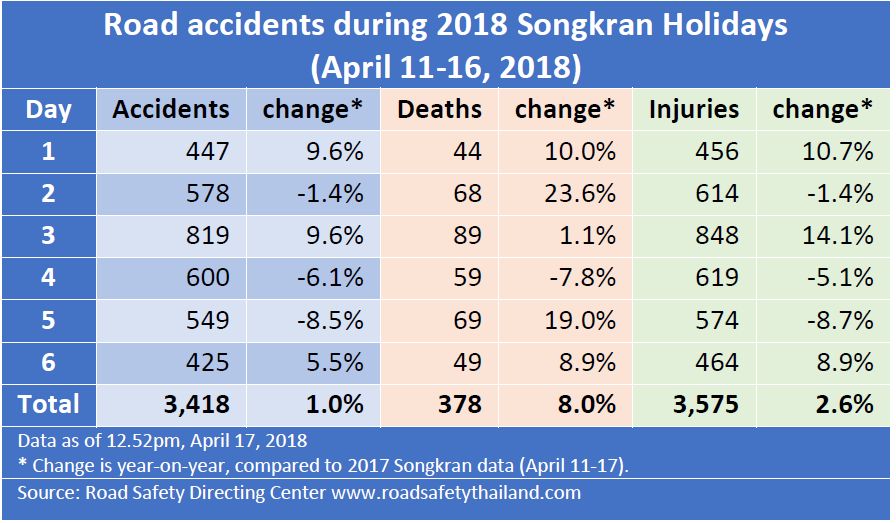 Col Sirichan Ngathong, deputy spokesperson for the National Council for Peace and Order (NCPO), said on Tuesday that polilce have impounded a total of 13,964 vehicles (10,139 motorcycles and 3,825 cars) from April 11 to 16 for violating the alcohol ban. Police have taken legal action against 147,971 motorcyclists and 86,674 drivers of private vehicles and public transportation, he said.