Nurse Khoysulnisa Porsaoji, wearing a white scarf, performs CPR on a woman badly injured in a car crash in Pattani's Muang district. The nurse has been praised by local residents for coming to the rescue of the crash victim. (Photo by Abdulloh Benjakat)

PATTANI: A Muslim nurse has won praise from local residents for saving the life of a woman badly injured in a car crash in Muang district, Pattani, on Thursday morning.

The accident occurred on Highway No.42 along Pattani-Narathiwat route in Kuwing village, Muang district, when a pickup truck rear-ended a motorcycle at around 8am.

The force of the crash caused the motorcycle to plunge into a roadside ditch. Ms Sahanae Jaeseng, 57, who rode the bike, was badly injured. Mr Assawan Ben-arwaekaji, driver of the pickup truck, escaped unhurt.

A loud noise from the crash drew a crowd, who saw the injured woman lying unconscious in the middle of the road, just 50 centimetres from the pickup truck. While they were watching, a nurse who was riding a motorcycle along the route stopped and came to the rescue of the unconscious woman, who worked as an assistant nurse at Pattani Hospital.

The nurse, identified later as Khoysulnisa Porsaoji, performed CPR on the woman until she came to amid the loud cheer of the onlookers.

An ambulance later arrived at the scene. The nurse accompanied the injured woman to Pattani Hospital before returning to the crash scene to get her bike.

Her action in helping the crash victim was praised by many residents.

Ms Kloysulnisa told the Bangkok Post that she was riding her bike to work at Pattani Hospital’s mental health unit as usual when she saw the woman lying unconscious on the road. She walked toward her and found the victim had no pulse. She immediately performed CPR on her. Later, 2-3 nurses arrived to help the victim until she could breathe again.

The nurse said she was not aware that the woman was an assistant nurse at the same hospital where she worked until a son of the victim told her.

The injured woman was now in an operation room for surgery as she suffered severe head injuries. 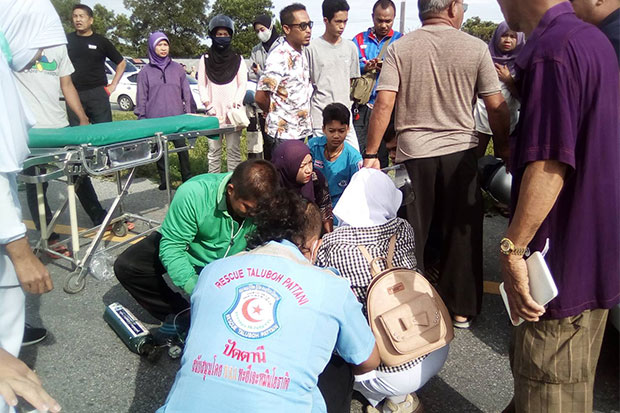 Rescue workers arrive to take the injured woman to a hospital. (Photo by Abdulloh Benjakat) 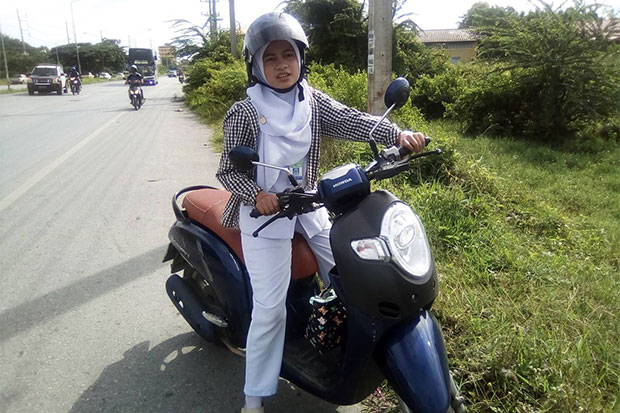 Nurse Khoysulnisa Porsaoji, of Pattani Hospital, returns to take her bike after sending the injured woman to the hospital. (Photo by Abdulloh Benjakat)