His Holiness Pope Francis has an audience with Their Majesties the King and Queen at the Ambara Villa in Dusit Palace on Thursday. (Photo courtesy of the Royal Household Bureau)

During his historic visit to Thailand, His Holiness Pope Francis has used the opportunity to pass on a message to the world to help take care of abused children and women as well as refugees around the world while highlighting inter-religious cooperation to create peace.

Pope Francis expressed concerns over the plight of those suffering from mistreatment during the Holy Mass at the Supachalasai National Stadium in Bangkok on Thursday evening.

Speaking in front of an audience of about 70,000, Pope Francis expressed concern about women and children, who are often victims of prostitution and human trafficking.

"[They are] humiliated in their essential human dignity. I think of young people enslaved by drug addiction and a lack of meaning which makes them depressed and destroys their dreams," he said.

Pope Francis added that his concerns include migrants without homes and families who feel abandoned as well as exploited fishermen and beggars. "Let us not deprive our communities of seeing their faces, their wounds, their smiles and their lives. Let us not prevent them from experiencing the merciful balm of God's love that heals their wounds and pains," he said. Pope Francis called on the Christian community in Thailand to help them. 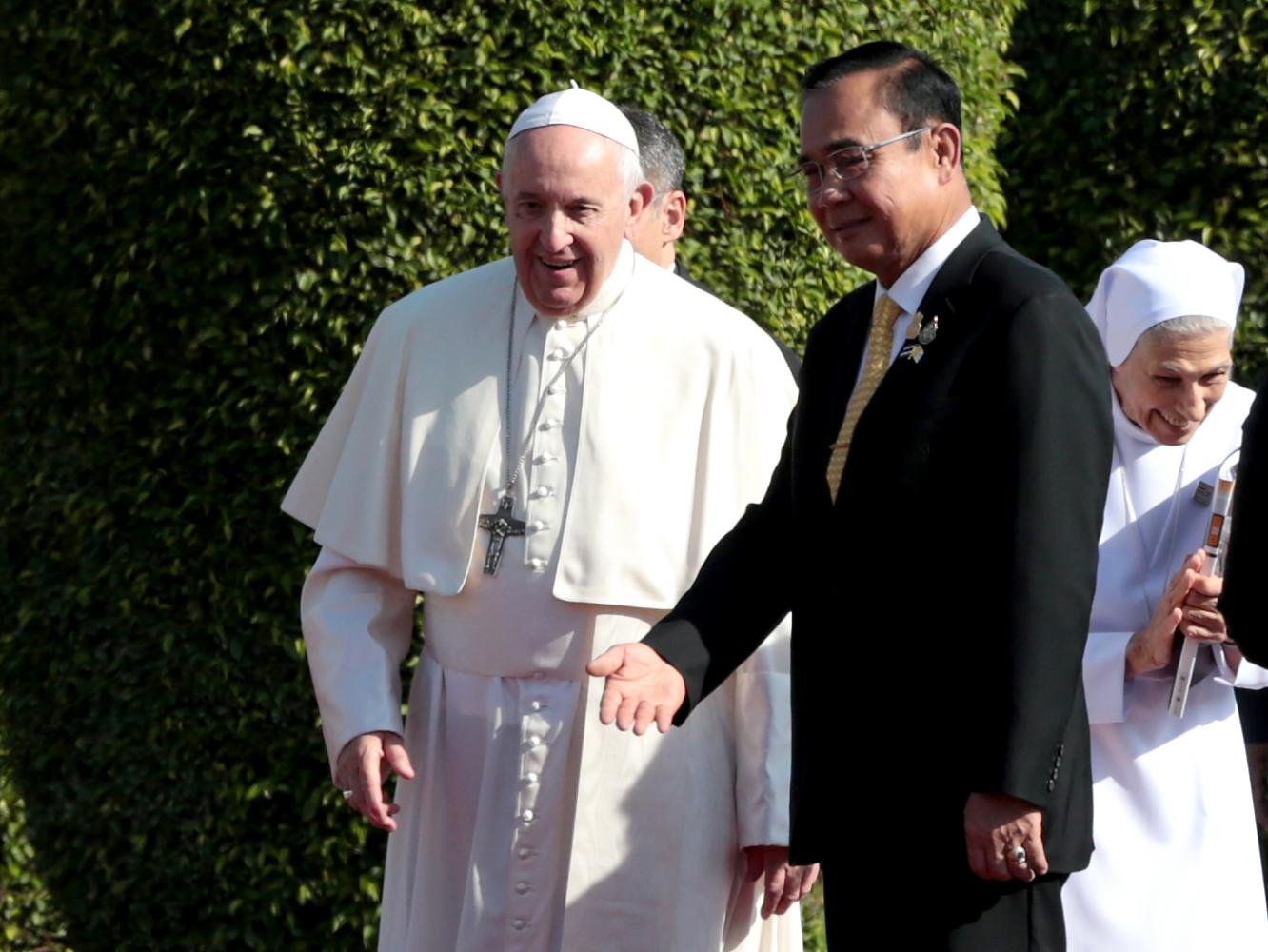 "The crisis of migration cannot be ignored. Thailand itself, known for the welcome it has given to migrants and refugees, has experienced this crisis as a result of the tragic flight of refugees from neighbouring countries. Once more, I hope that the international community will act with responsibility and foresight, that it will work to resolve the issues that have led to this tragic exodus, and that it will promote safe, orderly and regulated migration," he said to Gen Prayut as well as other political and religious leaders present.

"May every nation devise effective means for protecting the dignity and rights of migrants and refugees, who face danger, uncertainty and exploitation in their quest for freedom and a decent life for their families. It is not just about migrants; it is also about the face we want to give to our societies," he said.

The last pope to visit Thailand was Pope Saint John Paul II, who visited the country over four decades ago in 1984. Currently, the country's 388,000-strong Catholic community makes up less than 1% of the population. Most of the country's Catholics live in the North and Central regions.

The premier also said that Thailand has been working to promote basic human rights, especially with regards to guaranteeing religious rights and freedoms, and sustainable development.

The Pope also met the Supreme Patriarch at Wat Ratchabophit, and also visited St Louis Hospital, a Catholic hospital in Bangkok. Later he had a private audience with His Majesty the King before a public Mass at Bangkok's National Stadium.

During his meeting with the Supreme Patriarch, both spiritual leaders expressed appreciation of the friendship between the two religions as well as the promotion of harmony and cooperation to help the underprivileged.

More than 70,000 Catholics nationwide gathered at the National Stadium and Thephasdin Stadium to hear Pope Francis say mass on his three-day apostolic trip to Thailand. The crowd had waited patiently and stretched into the distance from the early hours.

Many people wore pope-emblazoned white and yellow caps -- the colours of the Vatican -- and they waved Vatican flags and shouted "Viva Il Papa" as the pope-mobile made its way around both stadiums.

Noppol Rattanapakdi, 69, from Bangkok, said Pope Francis is a very different pope to the other popes he has known during his life as he is a Jesuit for starters and also because he was a street priest in Argentina.

Poeke Thunraungniti, 77, a S’gaw Karen from Chiang Mai province, said she travelled more than 700 kilometres with her husband to attend the Mass because she wanted to see the pope with her own eyes and listen to his blessings.