Rescue workers enter the Terminal 21 shopping mall after a soldier went on a shooting rampage in Nakhon Ratchasima, also known as Korat, on Sunday, leaving at least 20 dead. (Reuters photo)

Commandos on Sunday killed a soldier after he carried out a shooting rampage in Korat that left 26 of his victims dead, police said.

Prime Minister Prayut Chan-o-cha told reporters early on Sunday afternoon that 27 people were dead, including the gunman, who he said had conducted the rampage because of "a personal problem" -- a dispute over a house sale with a relative of his commanding officer.

Earlier, a provincial public health official told a press conference on Sunday 20 people had been killed and 42 injured.

The figures excluded five others found hurt in the shopping centre on Sunday morning. But it was unclear if there were more victims inside the multi-level complex which was packed with Saturday shoppers when the gunman stormed in.

A fleet of ambulances left the front of the complex and forensic police poured into the grim crime scene, shortly before the gunman's death was confirmed. 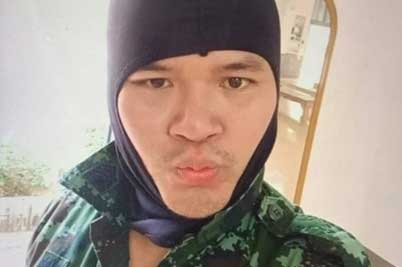 The night was peppered with heavy exchanges of gunfire and sporadic evacuations.

The latest casualty was a police officer who took part in a raid around 3am to force the gunman out, said Deputy Prime Minister and Public Health Minister Anutin Charnvirakul.

"He had been hit and unfortunately, he didn't make it," said Mr Anutin.

As shoppers ran for the exits late Saturday, police urged evacuees to "raise their hands" and identify themselves on the ground floor over fears the gunmen could hide among the desperate crowds.

Hours before the attack began on Saturday, Sgt Maj 1st Class Jakrapanth posted on Facebook, denouncing greedy people who took advantage of others and asking, "Do they think they can spend the money in hell?"

He relayed his shooting spree through Facebook Live and posts which charted the attack from the army barracks in the city to the mall.

GENEVA: All regions of the world saw water extremes last year -- both floods and droughts -- and billions of people had insufficient freshwater, the United Nations said on Tuesday.