The navy frigate HTMS Bhumibol Adulyadej is seen from the MS Westerdam liner in waters off the Thai coast. (Angela Jones/Handout via Reuters photo)

A cruise ship carrying 1,455 guests and 802 crew that was turned away by Thailand and four other countries on concerns over coronavirus, was finally given permission on Wednesday to dock in Cambodia, its operator announced.

A senior Cambodian government official told Kyodo News that the decision to let the Westerdam cruise ship operated by Holland America Line to dock in the southwestern seaport of Sihanoukville was based on humanitarian grounds.

"We will arrive at 7am local time on Thursday [today] ... and will remain in port for several days for disembarkation. Guests will be able to go ashore. All approvals have been received and we are extremely grateful to the Cambodian authorities for their support," the company said in a situation update on its website.

Since it sailed off from Hong Kong on Feb 1, the cruise ship had been turned away by Japan, Taiwan, the Philippines, Guam and Thailand over fears that some of its passengers may have been infected by the new coronavirus.

"All guests on board are healthy and despite erroneous reports there are no known or suspected cases of coronavirus on board, nor have their ever been," the company said.

It also stated at hollandamerica.com that guests will disembark in Sihanoukville over the next few days and transfer via charter flights to Phnom Penh for onward travel home. Holland America Line will arrange and pay for all flights, in addition to the already-pledged full cruise refund and credit for a future cruise.

Earlier on Wednesday, Thailand had been pressed to allow the ship to dock at Laem Chabang port in Chon Buri province after the operator asked for help from the World Health Organisation (WHO) and governments. Thai authorities, however, denied permission for the ship to dock, citing precautionary measures against the coronavirus outbreak. 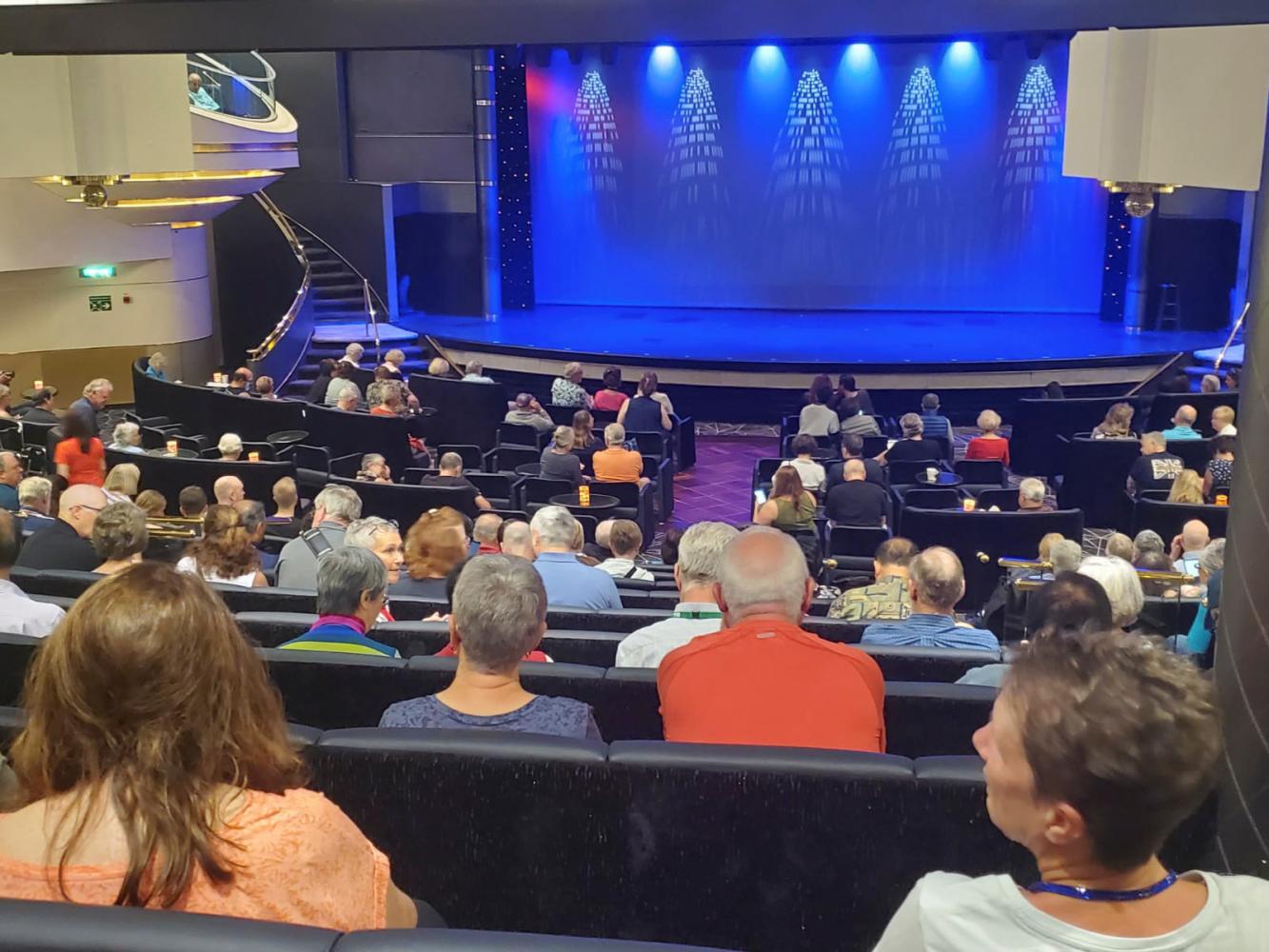 Passengers aboard the MS Westerdam gather for a meal. (Angela Jones/Handout via Reuters photo)

Passengers' hopes rose after spending almost two weeks afloat without disembarking when the captain announced he was steering the vessel into the Gulf of Thailand.

But by late afternoon, HTMS Bhumibol Adulyadej, a Thai navy frigate, was escorting the Dutch-flagged ship away from shore after the government barred the cruise ship from docking at Laem Chabang.

But passengers remained hopeful of making landfall and escaping the ship.

"Captain reports that ship is coordinating closely with Thai authorities, the WHO and govts of US, Canada, Holland and others," tweeted passenger Christina Kerby.

MS Westerdam left Singapore on Jan 16 before being turned away by Japan, Taiwan, Guam and the Philippines.

As it entered Thai waters on Wednesday, the plan was to dock on the eastern coast before passengers were ferried to Bangkok from where they could take flights home.

The ship was carrying 21 Thais, including 19 crew members, but the Thai government needed to deal with the matter carefully and offer the ship only humanitarian assistance, including medical help food supplies and fuel, deputy Prime Minister and Public Health Minister Anutin Charnvirakul said.

"The WHO chief called me Tuesday night, saying every passenger remained healthy and asking Thailand to take care of them," Mr Anutin said.

"But I was not convinced because the WHO chief was not aboard the ship."

The minister said he was not confident that the medical team on the cruise ship were capable of testing whether or not passengers had caught the virus.

Though authorities from many countries also said the ship was safe, their accounts had 'insufficient information' and failed to change the government's decision, Mr Anutin said.

"Also, Thailand was also never a planned destination on the ship's route," he said.

"Why should Thailand have to cope with this pressure? We have to think why other countries rejected the ship."

Thai officials may have felt the need to adopt the strict stance after several dozen passengers on another cruise ship, the Princess Diamond, tested positive for the virus.

The ship, which is carrying 3,700 people, is currently quarantined at the port of Yokohama in Japan.

So far up to 174 out of 492 suspected coronavirus cases have tested positive on the vessel, the NHK reported.

The medical checks began after an 80-year-old Hong Kong man who had been aboard the ship last month fell ill with the virus, according to the BBC.

However, the Cruise Ship Professional Association yesterday asked the Thai government to review its decision because it was confident authorities and health experts could deal with the viral outbreak effectively.

"We want every relevant state agency to help all passengers and crews under humanitarian principles," the group said.

In Thailand, one more patient has been discharged from hospital, bringing the number of people in the country who have recovered from novel coronavirus, or Covid-19, after treatment to 11.

That leaves only 22 of the 33 Covid-19 cases registered in Thailand so far still in hospitals, Disease Control Department's chief Suwannachai Wattanayingcharoenchai said yesterday.

"We're also going to discharge three more patients soon," he said, adding one of them is a Thai man who was among 138 Thais airlifted last week from Wuhan, the Chinese epicentre of the outbreak. The man, who works as a tour guide, recently tested negative for the virus.

"If he tests negative again, he can return home with no further need to be quarantined," Dr Suwannachai said.

Two other patients who are being treated at Bamrasnaradura Infectious Diseases Institute in Nonthaburi and Rajavithi Hospital will be also discharged if their lab test results are negative, he said.

Health experts have also cleared 587 suspected cases after finding most of them were suffering influenza. They are among a total of 799 suspected cases under surveillance.