Soldiers help to load equipment, including pressure chambers to treat Covid-19 patients, onto a truck. Donated by King Mongkut's Institute of Technology Ladkrabang, the equipment will be delivered to various hospitals. (Photo by Varuth Hirunyatheb)

The government on Saturday reported one Covid-19 death and 53 new infections — 42 of them migrant workers in Songkhla — bringing the total to 2,907 and fatalities to 51.

The death was a 48-year-old Thai man who had been in contact with a previously reported case. His brother worked at an entertainment place and was infected, Taweesilp Visanuyothin, spokesman for the Centre for Covid-19 Situation Administration, said on Saturday.

The 53 new cases were the most reported in a single day since April 9. Forty-two of them were migrants who had been detained at the immigration centre in Songkhla for illegal entry. They were from Myanmar (34), Vietnam (3), Malaysia (2), Yemen (1), Cambodia (1) and India (1). The infections were discovered during active case finding.

Dr Taweesilp said people in Songkhla need not worry about the risk since the group in question were detained and were being closely monitored.

Another four new cases involved people who had been in contact with existing patients (3) and a person who went to a crowded place, said Dr Taweesilp.

The remaining seven cases were discovered by active case finding in Yala province.

Of the 2,907 total cases in 68 provinces, 2,547 have recovered and been discharged from hospitals. A total of 309 are being treated at hospitals, the doctor said.

A jump in new cases in Singapore and the addition of five countries — Malaysia, Cambodia, Laos, Indonesia and Myanmar — to the dangerous zone list have led to a more proactive approach, which includes active case finding, said Dr Taweesilp. Up until now, the list consisted of four countries — South Korea, China (including Macau and Hong Kong), Italy and Iran.

Singapore has seen skyrocketing growth in infections, with more than 6,000 new cases in the past week, almost all of them among migrant labourers living in crowded dormitories that health authorities had all but overlooked earlier. The city-state registered 618 new infections on Saturday, taking the total number to 12,693.

Diplomatic and economic experts are calling on all countries in the region to step up screening of migrant workers in the future to prevent the transmission of diseases like Covid-19.

Meanwhile, more Thais are scheduled to arrive home on Saturday from Iran (21) and India (171). On Sunday, 212 more will arrive from Australia, Dr Taweesilp said.

The youngest patient was one month old and the oldest was 97. The average age of Covid-19 patients was 40. The highest number of infections was found among those aged 20-29, said Dr Taweesilp. 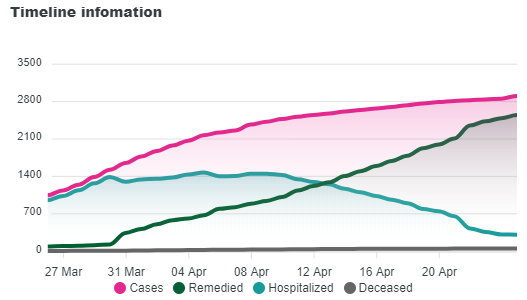